That's his issue with him? 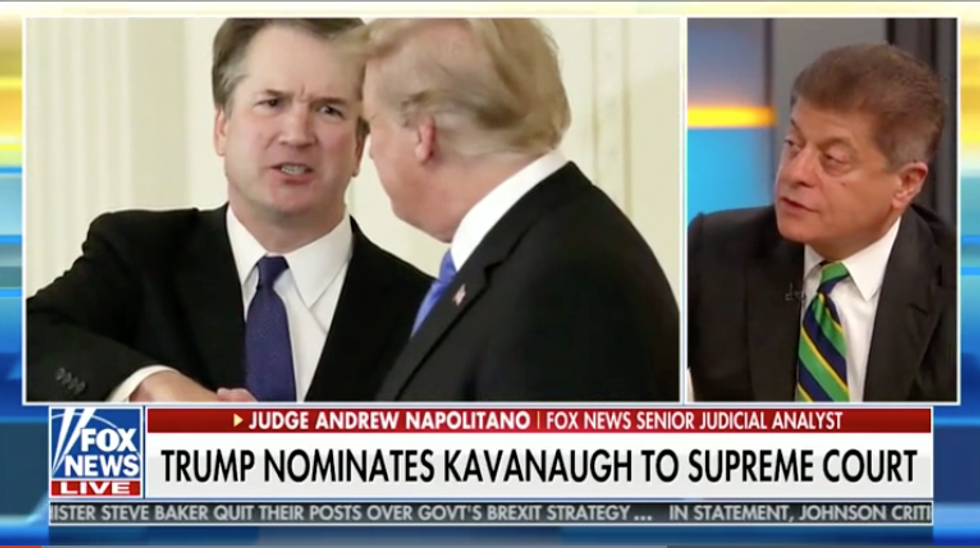 Napolitano, who works at Fox as a senior judicial analyst, told the panel he was "disappointed in the president," saying Kavanaugh "is not the type of person [Trump] said he'd pick."

PETE HEGSETH: So you're saying it's a swamp pick?

“These are not my words. These are words that he’s said throughout his career,” he concluded. “He is at heart and soul, a big government guy.”

Kavanaugh has written that a sitting president should not be subjected to criminal investigations while in office. Indicting a sitting president “would ill serve the public interest, especially in times of financial or national-security crisis,” Kavanaugh wrote in 2009.

@MamaTraditional @Judgenap #Trump picked Kavanaugh because he believes that "presidents should not be distracted by… https://t.co/tDiBnpPix9
— robert dresdner (@robert dresdner) 1531237722.0

Kavanaugh has also issued opinions on the constitutionality of Roe v Wade, which guaranteed women the right to abortion. He has said he considers the 1973 Supreme Court ruling to be binding, though he does support some restrictions on abortion.

Napolitano believes Kavanaugh "will be confirmed" by the Senate, though he expects "some fire from the right."

On the Affordable Care Act:

Although the D.C. Circuit, in the case of Seven-Sky v. Holder, upheld the Affordable Care Act as legitimate under the Commerce Clause––legislation which empowers Congress to regulate interstate commerce––Kavanaugh dissented based on his belief that the court did not have jurisdiction to hear the case. He cited 1867’s Anti-Injunction Act, which prohibits people from challenging taxes until after they’ve paid them. (Kavanaugh viewed the individual mandate as a tax that could not be challenged until the first mandate penalties were levied in the spring of 2015.)

Napolitano also revived a conspiracy theory about Vince Foster, a deputy white house counsel who served President Bill Clinton during the early months of his administration. Foster committed suicide in 1993, but his death sparked rumors that the Clintons murdered him in the White House and disposed of his body in a park.

These stories have been thoroughly debunked, however that didn't stop the judge from tying Foster's death to Kavanaugh. Trump has also peddled this unfounded allegation.

Kavanaugh was part of the investigation into the Clintons led by Kenneth Starr and concluded that Foster's death was a suicide.

Twitter pushed back against Napolitano's invoking of a long-dead conspiracy theory.

@Mediaite @JoshMankiewicz This just goes to prove that FOX is not really in the "news" business. They are in the en… https://t.co/XvOEtVsCO0
— Teresa Weaver (@Teresa Weaver) 1531241585.0

@Mediaite @yashar How come all Fox’s conspiracy theories are proven wrong? Because fox makes up these theories and… https://t.co/PM0rJjd0Bp
— Bella (@Bella) 1531241687.0

Kavanaugh is expected to face a brutal confirmation hearing, especially from Senate Democrats who are worried about the future of abortion rights, marriage equality, and the Affordable Care Act.

Democrats have also voiced concerns over Trump nominating someone whom they claim believes presidents shouldn't be investigated. They fear the president chose Kavanaugh in the event the Supreme Court has to issue a ruling on aspects of Special Counsel Robert Mueller's investigation into possible obstruction of justice by the president, Trump's campaign's ties to Russian election meddling, and whether or not the president can pardon himself.