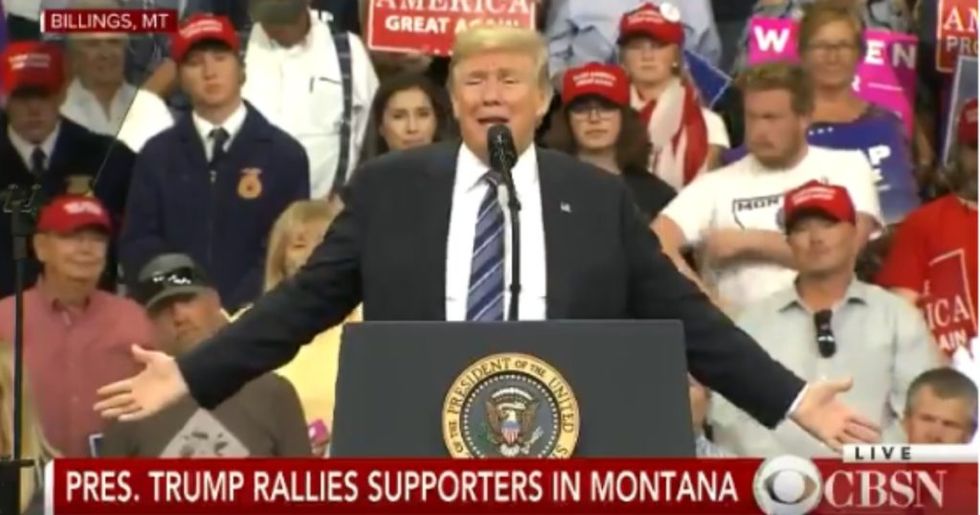 Democratic Florida gubernatorial candidate Andrew Gillum is firing back at President Donald Trump, who took an indirect swipe at Gillum at a MAGA rally in Montana on Thursday.

"Heard @realDonaldTrump went after me again tonight — in Montana — but still didn't have the courage to @ me by name," Gillum tweeted Thursday night.

Mr. President, my name is Andrew Gillum and I'm going to be the next Governor of Florida because lies and scare tactics don't vote, people do.

During a stump speech for Montana Republican Senate candidate Matt Rosendale, Trump said it would be a "disaster" for Florida if his chosen candidate, Ron DeSantis, loses the race. Trump did not mention Gillum by name.

"Ron for governor," Trump said, plugging DeSantis into a speech for Rosendale.

Trump says Florida will be "a disaster" if Democrat Andrew Gillum wins the governorship. "Ron for governor," he says in Montana.
— Daniel Dale (@Daniel Dale) 1536286134.0

Florida voters came to Gillum's defense. He's drawing a lot of excitement from the progressive left.

The day after the primary, Trump tweeted that Gillum is "a failed Socialist Mayor...who has allowed crime & many other problems to flourish in his city. This is not what Florida wants or needs!"

Not only did Congressman Ron DeSantis easily win the Republican Primary, but his opponent in November is his bigges… https://t.co/97naDf5NIB
— Donald J. Trump (@Donald J. Trump) 1535544037.0

Gillum quickly responded to Trump, urging the president to tag him if he's looking to pick a fight.

"What our state and country needs is decency, hope, and leadership. If you agree, join us at http://AndrewGillum.com . Also, @ me next time, @realDonaldTrump."

Gillum is not the only gubernatorial candidate Trump attacked in his Thursday speech - without having the courage to use their names.

Trump insulted the entire state of California, where Lieutenant Governor Gavin Newsom (D) is running on a platform of universal health care for all California residents.

"But I said to myself just common sense, everybody's gonna come in," Trump said of California. "I may even move to California to get free health care," he added. "I may move there."

Newsom responded: "Next time you call me and my policies out, have the guts to @ me and we can have a chat."

Twitter once again tore into Trump and his unpresidential behavior.

@GavinNewsom @realDonaldTrump He is so unprofessional unpresidential & outright ignorant. He does not know how to… https://t.co/xugxcAbDYY
— Angie Hylton (@Angie Hylton) 1536292472.0

@GavinNewsom @realDonaldTrump Gee Gavin, that would be too much like confrontation and Donnie doesn't really like t… https://t.co/XENlFMa4wa
— Katherine Fenton (@Katherine Fenton) 1536292315.0

Some California voters don't want Trump to move to their state.

Trump also warned attendees that California could "increase in size to 500 million people" if Newsom gets elected.