Don Jr.'s Line Mysteriously Cut Out During an Interview About the Trump Tower Meeting, and Anderson Cooper Roasted Him Perfectly 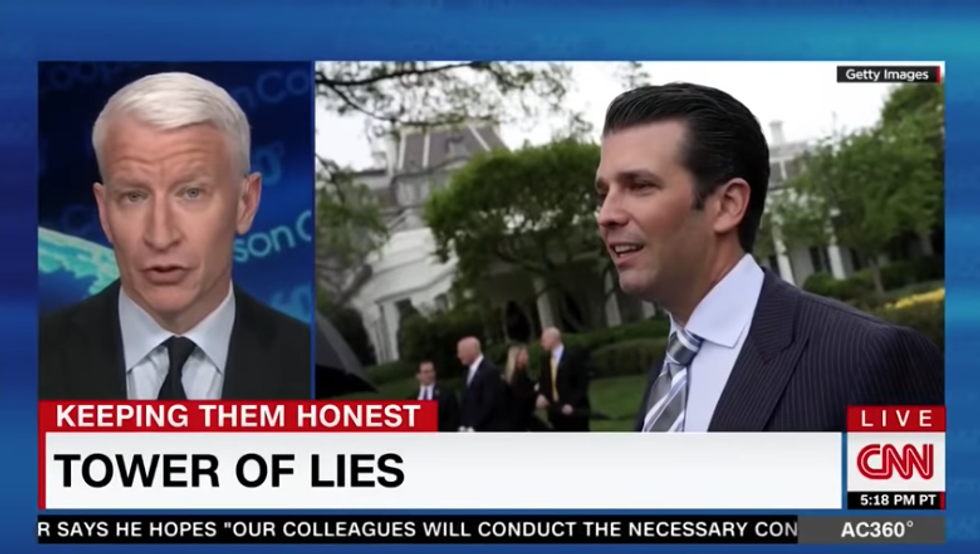 Anderson Cooper is a highly-respected journalist, but that didn't stop him from having a little fun at Donald Trump Jr.'s expense on Monday night.

During a phone interview with Fox News host Laura Ingraham, Trump Jr.'s phone suddenly seemed to cut out, with seven seconds of silence and a brief "hello" before dropping all together. While technical issues happen from time to time on live television, the drop was impeccably timed. Ingraham had just asked Trump Jr. about the Trump Tower meeting, which his father, President Donald Trump, revealed had been an effort to get dirt from the Russians on Hillary Clinton.

Anderson Cooper couldn't help but laugh at the poor timing (around the eight minute mark), invoking Ben Stein's portrayal of the droning teacher from the 1986 John Hughes film "Ferris Bueller's Day Off" with his own "Bueller...? Bueller...?"

A dropped phone call is likely the least of Donald Trump Jr.'s worries. As Cooper explained in the coverage leading up to the Bueller joke, Trump Jr.'s actions leading up to the Trump Tower meeting are looking more and more like conspiracy. The eldest Trump son made waves last year when he tweeted email correspondence proving that he knew the intermediaries he was meeting were acting on behalf of the Russian government. The screenshots were accompanied by what Trump Jr. said was his statement, however it was later proven that the statement was dictated by his father.

With President Trump's admission that the meeting was to get dirt on Hillary Clinton, Twitter hasn't been exactly merciful to either of them.

The botched Laura Ingraham call isn't the first time that even technology seemed to give up on Trump officials. Just last month, President Trump found himself in a similar situation.

Trump was doing damage control after his disastrous Helsinki conference and what seemed to be a denial that Russia was continuing its efforts to influence the 2018 midterm elections.

As Trump stressed his "full faith" in his intelligence agencies, the lights no longer seemed to have faith in him.

Like the Ingraham call, the incident was ridiculed across social media.

@JordanUhl I was hoping when they went back on he'd been raptured away.
— MJdowntheshore (@MJdowntheshore) 1531856849.0

While the glitches have been great for laughs, the reason for the Trumps' appearances--answering for their interactions with Russian officials--are much more serious. For many Americans, each new revelation seems to sully our national standing and leave thousands asking "Mueller...? Mueller? Mueller?"