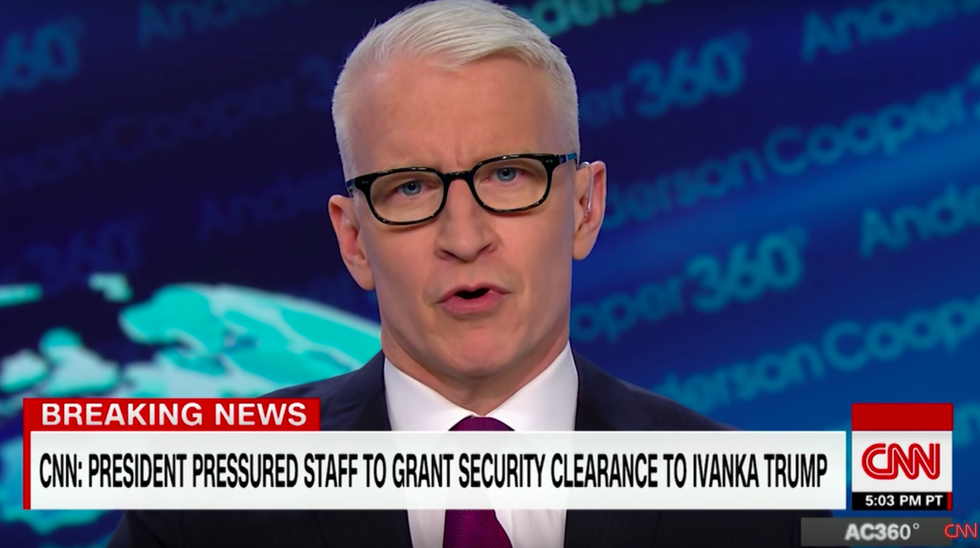 Cooper and Haberman were discussing the recent revelation that the President demanded a security clearance for his daughter, despite leading security experts' recommendations against it. Ms. Trump reportedly sought the high-level clearance to study briefing books on foreign trips, prompting Cooper to ask Haberman:

"What does sh—Why is she in the White House? Like what does she actually do?"

"In terms of foreign trips, it's a great question...I think there is an addictive quality to having access to this kind of information. What exactly Ivanka Trump needs to do with that information is unclear. She does have certain programs she has pushed for that have global impact, but those are economic, not national security based."

She also pointed out that Ivanka Trump still makes money from the Trump organization and hotels. "It's going to raise a ton of obvious questions...about not actually stepping back from businesses she has...and it is going to once again raise questions about the fact that the President and his family who are serving in the government did not really step away from the business," Haberman said. "And these are just obvious questions, there's nothing surprising about them."

Others provided additional answers to Cooper—none of them good.

@thedailybeast Ivanka has an office in the White House so, when she has an issue with any of her business enterpris… https://t.co/UnpbxgZYs5
— Frances Birnie (@Frances Birnie) 1551847536.0

@thedailybeast Travels at govt expense to collect trademarks all over the world for use by her businesses in the future.
— Windsoar G. (@Windsoar G.) 1551848292.0

@thedailybeast At this point it’s reasonable to suspect she & her husband are monetizing US intelligence for privat… https://t.co/TswrCoC7tu
— blog alley (@blog alley) 1551846973.0

@thedailybeast @sandyagraves She embarrasses the US and annoys world leaders by showing up as a representative for… https://t.co/xV8JS6OaPR
— Maxine Kingsbury (@Maxine Kingsbury) 1551878523.0

Anderson Cooper went on to point out a vicious double standard. Cooper asked:

Seeing as just last week, Trump supporters were still chanting for Hillary Clinton to be locked up, the answer is probably yes.

This comes despite the fact that Chelsea Clinton has foreign policy acumen in spades.

@andersoncooper No the Democrats would not go along if Hillary Clinton had been elected President and put Chelsea a… https://t.co/xxW8Ta8JqH
— Marcel Loup (@Marcel Loup) 1551491033.0

@andersoncooper @CNN, It’s easy to compare @realDonaldTrump hiering @IvankaTrump to how republicans would feel if… https://t.co/odAaHni8iv
— Best Michael Ever (@Best Michael Ever) 1551837838.0

@thehill If Hillary was President and pulled the crap the Trumps have the GOP would already be impeaching her. ##hypocrites
— Shae (@Shae) 1504821996.0

The only high-level clearance Ivanka Trump should profit from belongs on her fashion line.