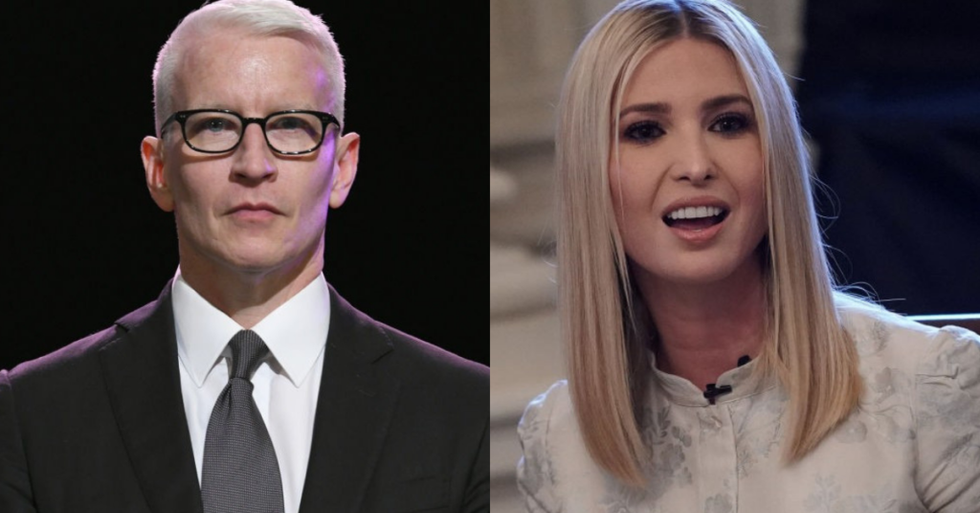 President Donald Trump continues to face backlash over comments he made about Jewish Americans who vote Democratic.

But two of Trump's favorite White House advisers are American Jews: Jared Kushner and Ivanka Trump. What did they think of the President's comments?

Anderson Cooper had a few thoughts on the matter.

"Ivanka Trump must be very proud of her dad tonight."

"And you can probably just watch for an Ivanka leak in the coming days about how she tried to talk [to] her father, you know, to change that kind of language."

To be fair, the First Daughter would have learned the tactic from the man who used to call reporters and radio shows and pretend to be someone else to brag about himself, Donald Trump.

In regards to the President and his attack against American Jews, Cooper said:

"It should be noted that throughout history, calling Jews ‘disloyal’ has been a common anti-Semitic trope. A pretext to exclude Jews or take their businesses or put them in ghettos or expel them from schools or exterminate them."

This is not the first time Ivanka Trump received negative feedback over her methods. It isn't even the first time Cooper has called her out for claiming to quietly advise behind the scenes while achieving no results.

Stories leaked that the White House adviser was working behind the scenes to  tone down her father's comments regarding Baltimore and his immigration and family separation policies and gun control and family leave and...

But in an interview with Abby Huntsman earlier this year, the First Daughter said about disagreements with her father:

"My job as a member of this administration is not to share my viewpoint when they diverge."

So which is it? Quietly working or not her job?

People had thoughts about Ivanka's White House role and her commitment to her faith.

@joncoopertweets @IvankaTrump She is Jewish in name only. Just like she pretends to know about world affairs.
— Nancy (@Nancy) 1566438933.0

@joncoopertweets @IvankaTrump Her go-to play: wait a few days, then tweet something about how Trump's economy is he… https://t.co/2oj0ZXW84g
— Chris Griffith (@Chris Griffith) 1566483404.0

As of Thursday morning, neither White House adviser addressed the President's remarks publicly nor was a leak sent to media about Ivanka quietly working behind the scenes.