Anderson Cooper Just Savagely Mocked Donald Trump for Saying George Washington Should Have Put His Name on Mt. Vernon, and Cooper Has Just the Name for It 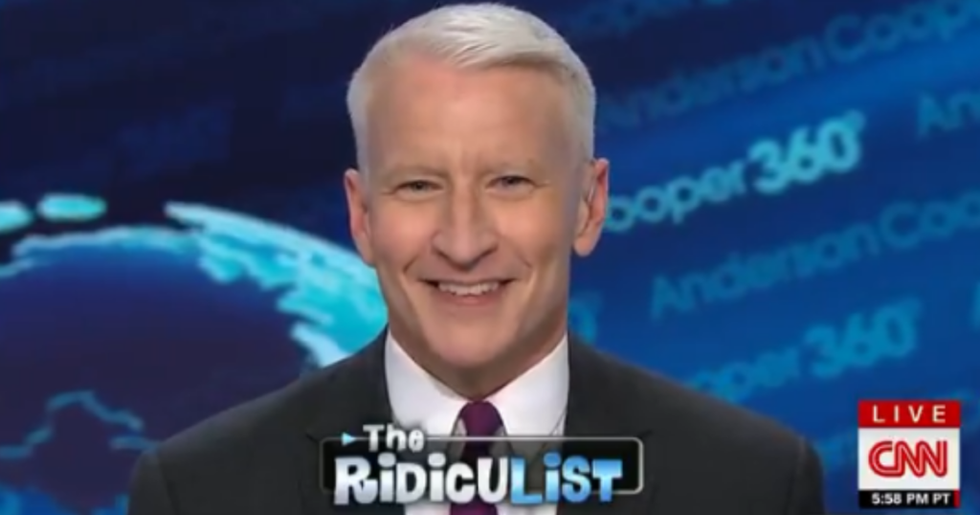 During a visit to Mount Vernon in April of last year, President Donald Trump reportedly could not fathom why George Washington did not name the estate after himself.

“If he was smart, he would’ve put his name on it,” Trump said according to Politico. “You’ve got to put your name on stuff or no one remembers you.”

“I mean, really, who remembers George Washington. Am I right?” Cooper said. “I mean, he doesn’t have a Broadway musical the president hates. Hamilton! He’s got a musical.”

As for Washington? "He's got what, that monument and that city, what's it called? Oh yeah, Washington," Cooper joked.

Cooper mimicked what he imagined was going through Trump's head as he toured the first president's home.

"Washington's ratings are low, his wall is low, he's choking like a dog in the street. John Hancock; him we remember, am I right? I mean he signed that... whatcha call it... Declaration of Independence with a huge signature. I mean, that's branding. Washington? Drawing a blank."

Cooper next went over a list of defunct products that were brandished with the Trump name. These include Trump Steaks (sold at The Sharper Image, yum!), Trump's failed casinos, his ill-fated airline, and Trump's former yacht - the Trump Princess - that was sold to Saudi Prince Alwaleed bin Talal in 1991 when Trump was bankrupt.

"It's probably best to not dwell on how those ventures turned out financially. Let's just say they're in the file cabinet marked 'very stable genius.'"

Let us not forget Trump University, or as Cooper referred to it: "a $25 million class action settlement." Trump also had a vodka brand that flopped.

Cooper posited that Washington should have named Mount Vernon "Washington's Joint" because "that would be memorable... and why not do something the whole family could enjoy?"

@AC360 @andersoncooper Lol 😂 This was the best #Ridiculist yet! A good measure is how many times Anderson breaks in a chuckle #cutestgiggler
— Jeannie (@Jeannie) 1554947617.0

Trump's ego blinds him, and we should remember the opposite was true of Washington. How do we know this?

Because Washington willingly gave up power after two terms as president.

Washington has no depictions on nothing today, what a shame.

Trump and Washington do share one distinction, however. Prior to Trump, Washington was considered to be our richest commander in chief.