Anderson Cooper Just Debunked a Day's Worth of Donald Trump's Lies, and Hoo Boy, Yeah, It's a Lot 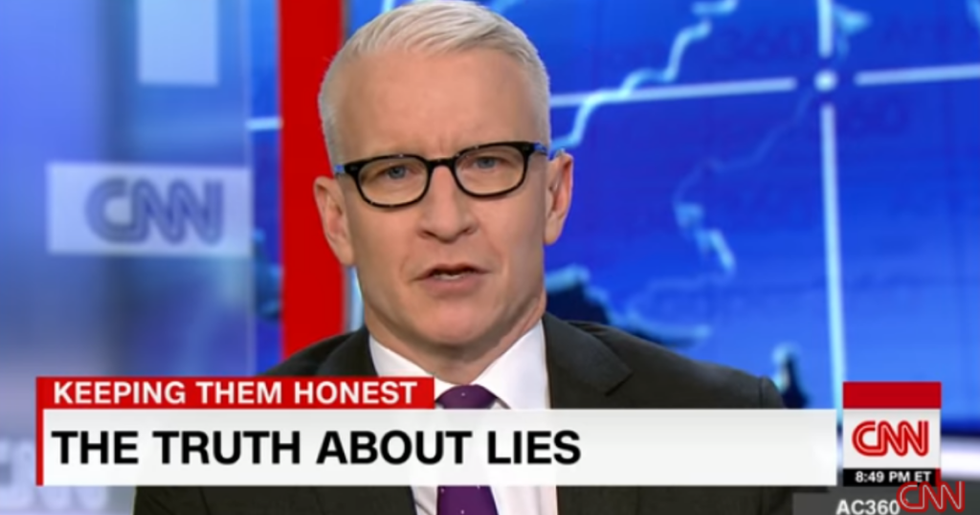 As of April 1, 2019, President Donald Trump has made 9,451 false or misleading statements since taking office, The Washington Post reported earlier this week. That adds up to an average of 22 "fishy claims" per day - an almost three-fold increase from 5.9 in his first year.

On Wednesday, Anderson Cooper debunked a bundle of the president's trumped-up zingers from the previous 24 hours.

Cooper began by nailing Trump on his promise to release his tax returns after they are done being audited. They are neither being audited nor has he released them. There is also no rule against making tax returns that are under audit public, which they are not.

Here is a quick rundown of Cooper's fact-checking, with some of our own:

Check out Cooper's commentary below:

From claiming his Bronx-born father is from Germany, to falsely touting the cancer-causing properties of windmills,… https://t.co/61oOO0tnVF
— CNN (@CNN) 1554347449.0

This is getting to be exhausting.

The windmill thing is just... yeah.

We have to laugh right?

@CNN @andersoncooper Please let me know if you or anyone you know has suffered from Windmill Cancer so we can start… https://t.co/qvnZYHWHGZ
— AngryGayLiberal (@AngryGayLiberal) 1554388111.0

Trump also struggled to say the word 'origins' while referring to Special Counsel Robert Mueller's investigation and report, which Trump has deemed "illegal," a "hoax," and a "witch hunt."

Instead, he said "oranges." Multiple times.

At least tomorrow is Friday.