Short and not sweet. 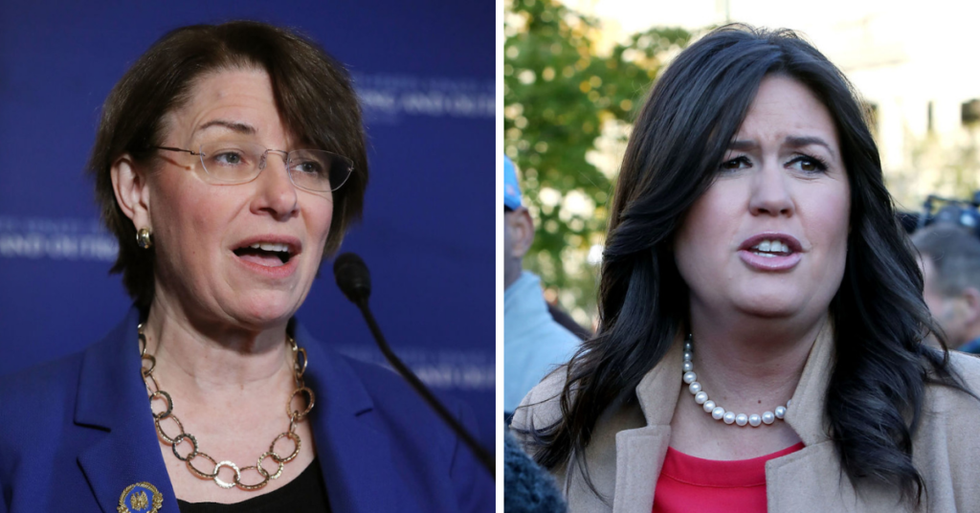 "This is a dangerous, dangerous road and frankly, Chris, I don't think Congress, particularly not this group of congressmen and women, are smart enough to look through the thousands of pages that I would assume that President Trump's taxes will be. My guess is most of them don't do their own taxes, and I certainly don't trust them to look through the decades of success that the President has and determine anything."

Chris asks @PressSec if the President will tell the IRS not to release his tax returns #FNS https://t.co/RBaVniYMKj
— FoxNewsSunday (@FoxNewsSunday) 1555249866.0

These remarks prompted a simple two-word response from Senator Amy Klobuchar (D-MN), who has been vocal in demanding that the president release his own tax returns:

And it looks like people want Klobuchar to go right ahead:

@amyklobuchar The spokesperson for the most incompetent administration (and president) ever is questioning the inte… https://t.co/ZptefNCAoX
— Jeff Mulligan (@Jeff Mulligan) 1555346799.0

Ten members of Congress are accountants, according to the Congressional Research Service. They would undoubtedly have the knowledge required to look through the president's returns thoroughly. Three are trained as certified public accountants, professionals licensed by their states to do exactly what Sanders claims they're not "smart enough" to do.

Sanders' statements came after House Ways and Means Committee Chairman Richard Neal issued a second formal request for the IRS to release Trump's tax returns. Neal cited IRS code 6103, a law that states that the House Ways and Means chairman, the head of the Joint Committee on Taxation and the Chairman of Senate Finance can ask for anyone's personal tax information for their committee's use.

"Those conversations have started, but it would be premature for me to conclude how long that will take, because as I've said these are complicated issues," said Mnuchin. "And I think it's more important to the American taxpayers that we get this right than we hit an arbitrary deadline."

"I'm not going to make a commitment prematurely as to whether we will be able to conclude our legal review within that deadline or not. Obviously, given the importance of this issue we have people working on this diligently. But again I would just emphasize this is a decision that has enormous precedence in potentially weaponizing the IRS. The chairman gave us a deadline last time. Again, we responded by that deadline. The Chairman is giving us a new deadline. I'm sure we'll respond by that deadline."

Trump is the first president in decades to break norms and not release his tax returns, citing an IRS audit. The IRS has said it does not prevent people from releasing their tax returns even if they are under audit.

Senator Klobuchar released her own tax returns ahead of the president's visit to her home state to tout his 2017 reforms to the tax code. These changes increased the size of the standard deduction, capped the state and local tax deduction at $10,000, and eliminated the deduction for unreimbursed business expenses.

Senators Elizabeth Warren (D-MA) and Kamala Harris (D-CA) are among the Democratic presidential contenders to have also released their tax returns.