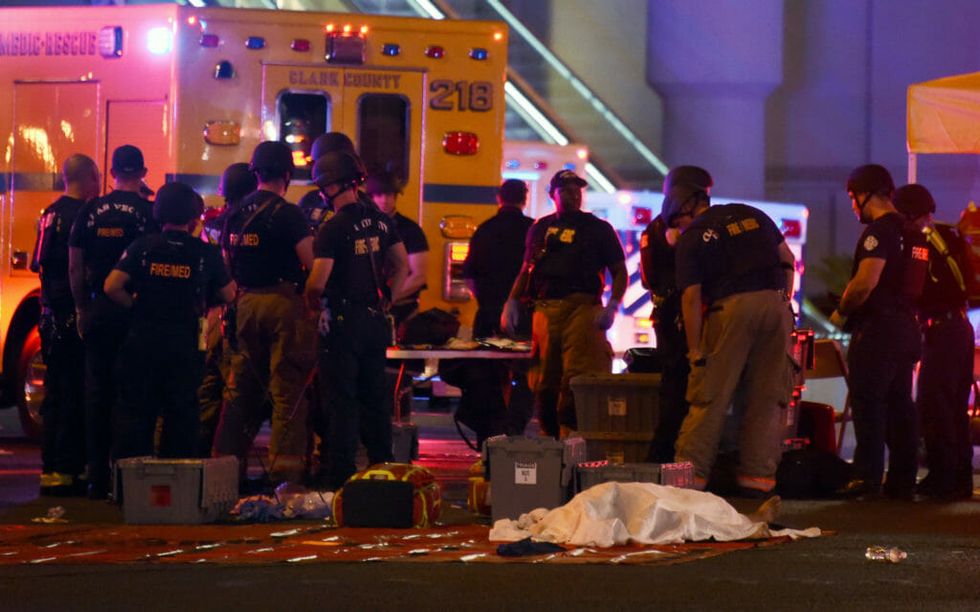 LAS VEGAS, NV - OCTOBER 01: A body lies under a sheet as fire and rescue personnel gather at the intersection of Las Vegas Boulevard and Tropicana Ave. after a mass shooting at a country music festival nearby on October 1, 2017 in Las Vegas, Nevada. A gunman has opened fire on a music festival in Las Vegas, leaving at least 20 people dead and more than 100 injured. Police have confirmed that one suspect has been shot. The investigation is ongoing. (Photo by Ethan Miller/Getty Images)

Former Arizona Representative Gabrielle "Gabby" Giffords was among the prominent voices to send out her condolences after 58 people were killed and, reports now estimate, more than 515 others were injured in the deadliest mass shooting in modern American history when a lone gunman opened fire on country music festival attendees from the 32nd floor of the Mandalay Bay Resort and Casino.

Giffords has been at the forefront of the movement to curb gun violence since she survived an assassination attempt in January 2011. Giffords was shot in the head by Jared Lee Loughner during an event outside a Tuscon grocery store. Six others were killed and an additional 12 were injured during the attack.

Heartbroken by the scene our nation is waking up to this morning. No person should endure the horror Las Vegas experienced last night.
— Gabrielle Giffords (@Gabrielle Giffords) 1506947288.0

Just days ago, Giffords expressed her support for Representative Steve Scalise (R-LA), the House Majority Whip, who returned to the House following months of rehabilitation after he survived a shooting in June during a congressional baseball practice that left several others, including Congressional aides, wounded. Scalise also sent out his condolences to victims of last night's attack.

Jennifer and I are praying for the victims of this unspeakable violence in Las Vegas.
— Steve Scalise (@Steve Scalise) 1506950011.0

Elected officials, both present and former, also weighed in.

My warmest condolences and sympathies to the victims and families of the terrible Las Vegas shooting. God bless you!
— Donald J. Trump (@Donald J. Trump) 1506942697.0

Michelle & I are praying for the victims in Las Vegas. Our thoughts are with their families & everyone enduring another senseless tragedy.
— Barack Obama (@Barack Obama) 1506948076.0

How long do we let gun violence tear families apart? Enough. Congress & the WH should act now to save lives. There's no excuse for inaction.
— Joe Biden (@Joe Biden) 1506956499.0

Words fail this morning. The friendship & support of Canadians is with the victims in Las Vegas & the people of the US.
— Justin Trudeau (@Justin Trudeau) 1506949412.0

Pope Francis also weighed in, referring to the killing as "a senseless tragedy."

“Deeply saddened to learn of the shooting in Las Vegas, Pope Francis sends the assurance of his spiritual closeness to all those affected by this senseless tragedy,” said a message sent to the Roman Catholic bishop of Las Vegas today.

The attack on the Las Vegas Strip now holds the morbid record for being the deadliest mass shooting on American soil since the mass shooting at Orlando’s Pulse nightclub last summer, which left 49 dead and 53 injured.