After Impeachment Vote, Congressman Who Left the GOP Has Dire Warning for Republicans Who Defend Trump 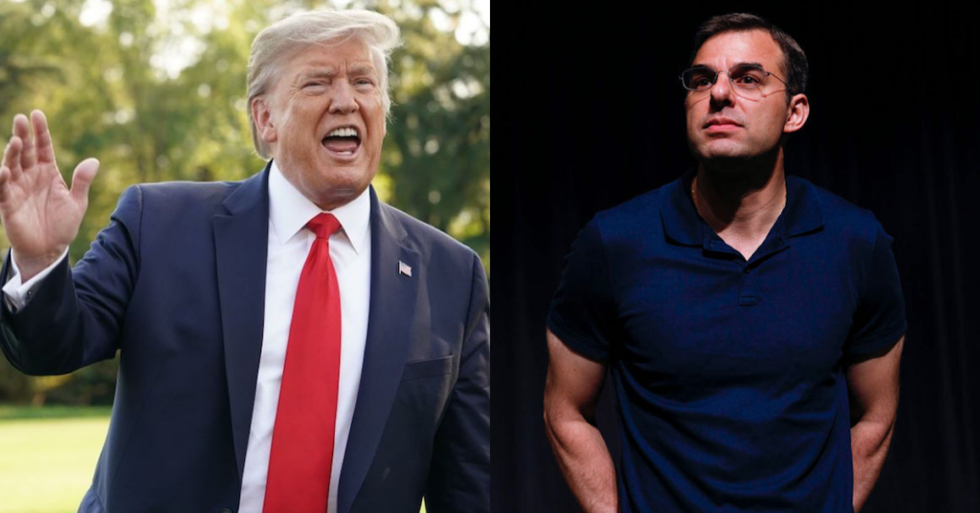 "The House of Representatives ... shall have the sole Power of Impeachment." ~ Article I, Section 2, Clause 5

The permission of the President, the Senate or the minority party in the House is not required to proceed with impeachment despite GOP and White House claims to the contrary.

The power to impeach has only been used for a President twice in United States history—for Andrew Johnson and Bill Clinton. President Richard Nixon resigned before he could be impeached.

Despite historical precedent and constitutional backing, segments of the Republican Party have gone to extraordinary measures to try to disrupt and discredit the impeachment inquiry of President Donald Trump for a laundry list of so-called violations. But a former Republican—who left the party in July 2019 over his party's embrace of Trump—has called foul on the shenanigans and misinformation.

Representative Justin Amash of Michigan—now an  independent—took to Twitter to admonish his fellow members of Congress. And to advise them to consider how history will judge them.

"This president will be in power for only a short time, but excusing his misbehavior will forever tarnish your name. To my Republican colleagues: Step outside your media and social bubble. History will not look kindly on disingenuous, frivolous, and false defenses of this man."

This president will be in power for only a short time, but excusing his misbehavior will forever tarnish your name.… https://t.co/bC8InVZEJs
— Justin Amash (@Justin Amash) 1572531360.0

People concurred with the Michigan Congressman's assessment and advice.

@justinamash I seriously do not understand how so many are making this so political, and plain ignoring obvious, bl… https://t.co/rMtjtS0Q2a
— Steven Myers (@Steven Myers) 1572531690.0

While some posited the sound advice would fall on deaf ears. And some—like Amash—also left the GOP as a result.

@Alphabitch27 @TheWrightJohn @justinamash @Lawrence I look at the more as being supporters of fascism or a dictatorship
— k hank #resist (@k hank #resist) 1572534377.0

@airbagmoments @justinamash @DogMoosey This is a great point. There's a lot of talk about Trump changing who people… https://t.co/pKK4guNYC7
— Erik Nelson (@Erik Nelson) 1572533921.0

@justinamash And what’s at stake is free and fair elections. If Senators or Reps support this President’s actions,… https://t.co/o674EUoZfu
— Citizen Commenter (@Citizen Commenter) 1572533626.0

@justinamash We have a “Russian asset” in the White House. PERIOD. The only question is this: How MUCH cooperati… https://t.co/VHoKRXfTUR
— Buddy Tumbarello (@Buddy Tumbarello) 1572532143.0

Amash earned respect for his stance and integrity from some, despite largely differing with him on politics.

The President did have a few supporters in the comments, although their message seemed awash in the type of conspiracy theories Amash advised against.

@justinamash You are a disgrace Justin Amash. Siding with Democrats who announced their impeachment of Trump the ni… https://t.co/UBjWxKWGqK
— Melissa A. (@Melissa A.) 1572542276.0

The Congressman's message referred to the actions of several GOP members of the House who earned themselves the moniker MAGA minions for their actions to derail the impeachment inquiry. Appearing on news broadcasts, the House floor and posting on Twitter, the GOP group earned accolades from Trump supporters and derision from other members of Congress and an informed public for the inaccuracy of their claims.

As Amash pointed out in his advice, the lies and grandstanding play well to a base unfamiliar with constitutional law or the rules of Congress. But a reflective, informed gaze back to this moment will not be as kind.

The book Everything Trump Touches Dies: A Republican Strategist Gets Real About the Worst President Ever is available here.