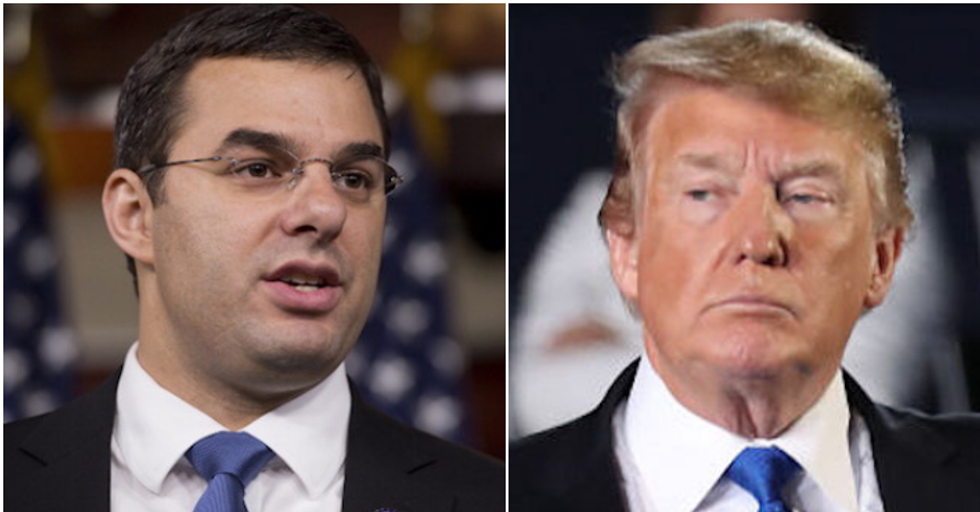 The House of Representatives intends to vote on a resolution to oppose President Donald Trump's border wall funding ploy some time Friday. While the House is now controlled by the Democrats, that does not mean Republicans all endorse the trumped up national emergency that even the President admitted was created just to bypass appropriations law and the legislative branch.

Representative Justin Amash, a Michigan Republican, is one of those who oppose the President's plan to bypass Congress to get his legacy project border wall funded. A Republican controlled Congress refused to fund Trump's wall for over two years while they held both the House and Senate majorities so GOP opposition to the wall was clearly demonstrated.

But now that the President is using the guise of a national emergency to take the funds without congressional approval, GOP pushback is scarce.

Amash took to Twitter to explain why he should not be alone in his opposition.

The United States Constitution that every member of federal service—whether elected, employed or enlisted—takes an oath to uphold and defend.

@justinamash The Republican Party has sworn fealty to one-man over its country. Republicans like @LindseyGrahamSC p… https://t.co/46PXBR9PVd
— scjr (@scjr) 1550290255.0

The US Constitution set up three branches of government: judicial, executive and legislative. Trump and his cabinet and advisers make up the executive branch while Congress constitutes the legislative and the judicial is comprised of the federal court system with the Supreme Court as the ultimate authority.

Going back to the Framers of the Constitution, Americans have recognized the president’s inherent power as chief ex… https://t.co/p3qP8HfKJp
— Justin Amash (@Justin Amash) 1550269853.0

However there are times waiting for congressional spending authority is impractical so the ability of the executive branch to declare a national emergency was created. The purpose is to provide aid quickly in the event of a natural disaster or terrorist attack, such as Hurricane Maria or 9/11.

But the Trump administration decided to use the national emergency option as a political ploy to address something Congress had years to act on. Congress decided not to fund the "most expensive and least effective" form of border security—Trump's border wall—but the President refuses to accept a hard "no" from his own party as an answer.

Amash further explained his stance and why everyone who honors their oath to defend and uphold the Constitution should feel the same.

He went on to explain how and why national emergency declarations do not trump Congress.

Over the years, Congress has passed laws to create an orderly process for receding the president’s inherent emergen… https://t.co/F8MRJYQEPd
— Justin Amash (@Justin Amash) 1550269853.0

Laws like the War Powers Resolution and the National Emergencies Act are not—and, under our Constitution, cannot be… https://t.co/Ajxq8wfTXA
— Justin Amash (@Justin Amash) 1550269854.0

Congress cannot turn the executive branch into the legislative branch. Such an effort fails for lack of conformity… https://t.co/PpSMjRXys0
— Justin Amash (@Justin Amash) 1550269855.0

Can Congress make a law permitting the president to conduct the entire appropriations process by his declaring an e… https://t.co/ycbOP6FCm8
— Justin Amash (@Justin Amash) 1550269855.0

Amash adds that having to create a law to overturn presidential abuse of powers not granted to them by the Constitution should not be necessary and should not require presidential approval.

In the end, Amash vows to take tools away from a President who cannot be trusted to use them in accordance with the Constitution.

Congress should (and I will) work to repeal laws that ostensibly grant legislative powers to the president. But eve… https://t.co/6S4iRFUwip
— Justin Amash (@Justin Amash) 1550269856.0