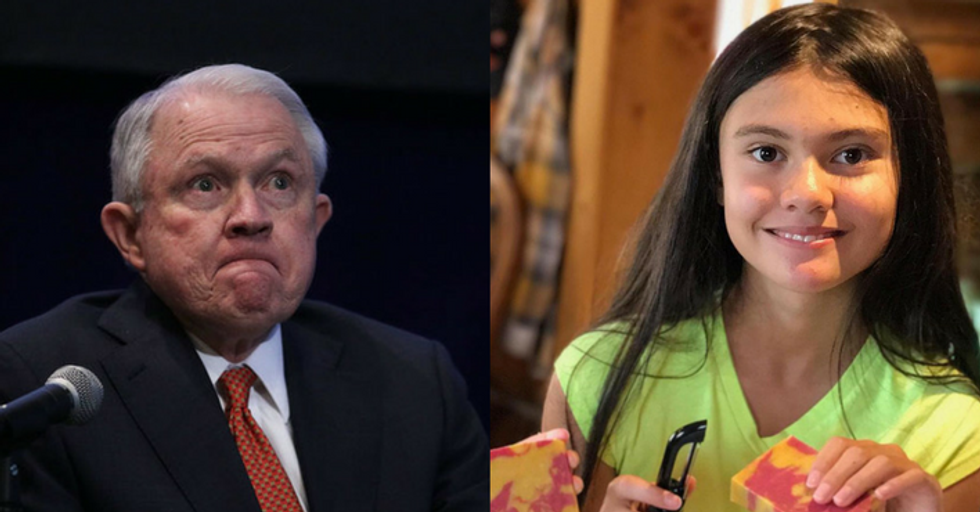 A 12-year-old girl with epilepsy filed suit against Attorney General Jeff Sessions over federal marijuana policy, specifically medical use. Colorado resident Alexis Bortell and her family moved from their home in Texas just because of laws denying her access to her life altering medication: cannabis oil.

"Ever since I've been on this cannabis (oil), I've actually been seizure-free for – today it's 974 days, so we're coming up on 1,000. So I think that's pretty good," Alexis states. Previously Alexis suffered one or more seizures daily. Epilepsy medications failed to work for her and brain surgery was her last alternative in Texas.

But AG Sessions made his stance on marijuana, all uses, very clear when he spoke to the Heritage Foundation in October.

I do think that this whole country needs to not be so lackadaisical about drugs.”

Sessions remarked marijuana use leads to drug addiction, especially opioid abuse, according to "many police chiefs" he heard from.

The lawsuit demands "cannabis for the treatment of their illnesses, diseases and medical conditions."

Alexis refers to her epilepsy as her seizure monster. An oil made from marijuana taken twice a day tamed the beast, but wasn't legally available in Texas. Her parents made the decision to move to Colorado three years ago for Alexis' health needs.

Alexis hopes the lawsuit will make medical marijuana legal across the country so others don't have to make the same tough choice and to help those who can't leave their home state.

I think it's really unfair, 'cause I feel like they're basically punishing us because we're sick."

The medical community is divided on the use of cannabis for treatment because of the lack of studies supporting it's use. However the federal classification of marijuana as a controlled substance in the same category, Schedule 1, as heroin and LSD doesn't allow the FDA or other researchers to conduct human medical testing. It's a Catch-22.