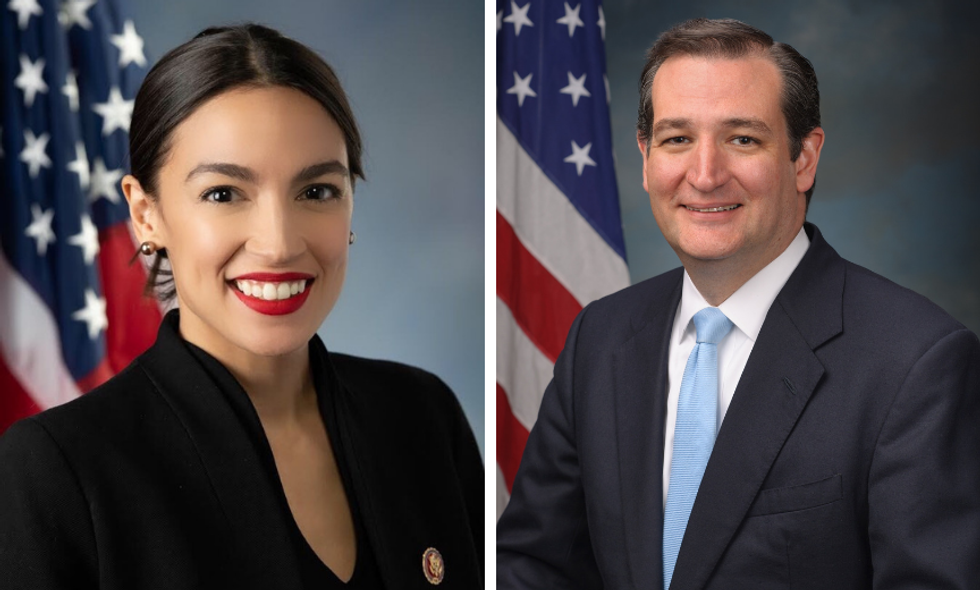 On Thursday, Rep. Alexandria Ocasio-Cortez (D-NY) and Senator Ted Cruz (R-TX) had a Twitter interaction that is giving people hope that perhaps bipartisan cooperation in Washington is not dead.

It all started with this tweet by AOC railing against the practice of former members of Congress turning around and becoming paid lobbyists:

"I don’t think it should be legal at ALL to become a corporate lobbyist if you’ve served in Congress.

At minimum there should be a long wait period."

To which Ted Cruz, to the surprise of many, replied that he agreed with AOC's assessment:

AOC then pitched bipartisan legislation to ban former members of Congress from becoming a lobbyist:

"If you're serious about a clean bill, then I'm down. Let's make a deal."

And Cruz tweeted back a simple:

Then Democratic Senator Brian Schatz said he was in as well, as did Republican Congressman Chip Roy, after which AOC tweeted:

Even Democratic Senator Michael Bennet, who is running for President, weighed in to remind folks that this is an effort he has been championing for a long time, and welcomed this bipartisan progress.

The reason he had trouble getting co-sponsors?

"Because everyone wanted to be lobbyists."

People were heartened by this transparent display of policy making.

@AOC @brianschatz @tedcruz @chiproytx If someone had told me yesterday that Ted Cruz & AOC would be teaming up to f… https://t.co/vpcAzVKFBK
— Keith Apland (@Keith Apland) 1559256321.0