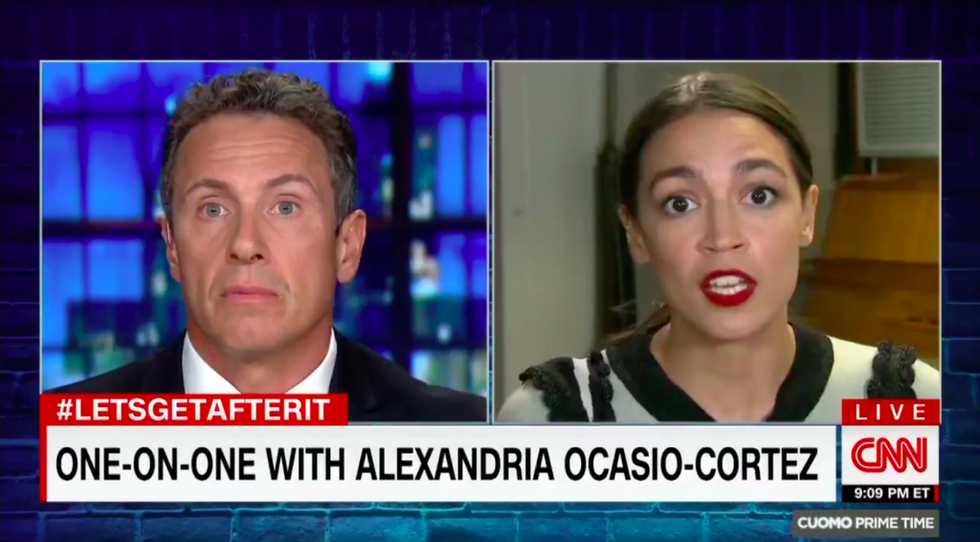 Alexandria Ocasio-Cortez, who, in perhaps the biggest upset of the 2018 midterm election season, won the Democratic primary in New York's 14th congressional district, defeating the incumbent, Joe Crowley, questioned why Congress seems to have no money when it comes to paying for “Medicare for all” but seems to have no problem finding the funds to support “unlimited war” and tax cuts for the wealthiest Americans.

Health care for all Americans “is not a pipe dream. Every other developed nation does this ― why can’t America?” Ocasio-Cortez asked.

She continued, calling out the Republican Party for its spending habits, saying that the United States only has "empty pockets when it comes to the morally right things to do":

We write unlimited blank checks for war. We just wrote a $2 trillion check for that GOP tax cut and nobody asked those folks how they are going to pay for it...Why is it that our pockets are only empty when it comes to education and health care for our kids? Why are our pockets only empty when we talk about 100 percent renewable energy that is going to save this planet and allow our children to thrive?... We only have empty pockets when it comes to the morally right things to do. When it comes to tax cuts for billionaires and when it comes to unlimited war, we seem to be able to invent that money very easily. To me, it belies a lack of moral priorities that people have right now, especially the Republican Party.

Naturally, her statements made her a target for conservatives, including Representative Jason Chaffetz, who insists "her facts are totally wrong."

And others piled on.

@FoxBusiness @jasoninthehouse This woman's understanding of the world is so shallow its hard to take her seriously.… https://t.co/HxfVbEiyN3
— RickN (@RickN) 1533834359.0

This isn't the first time Ocasio-Cortez has made similar points. Last month, while speaking to Trevor Noah, she said many of the current crop of politicians in Congress lack the moral courage to bring a health care rehaul to the forefront.

It's been shown time and again that a Medicare for All plan as pushed by Ocasio-Cortez and Vermont Senator Bernie Sanders before her would save billions in health care costs, though this has not kept such a program from being routinely demonized by hardline conservatives.

In fact, although a report from the Mercatus Center at George Mason University, a libertarian-conservative think tank financed by Rebekah and Robert Mercer and the Koch brothers, found that a Medicare for All plan would cost the federal government $32 billion, it would still cost less than what it costs to maintain our current system while covering 30 million more people.

Ocasio-Cortez has been traveling in recent weeks and speaking at town halls, in the hope of galvanizing a progressive wave to take control of Congress this November.

Responding to her critics, she said the first thing she does when "the Right is being particularly feisty" is "see which bad news of theirs they're trying to distract from."

Ocasio-Cortez cited a report that Representative Chris Collins (R-NY) had been arrested by federal agents on securities fraud-related charges.