Alexandria Ocasio-Cortez Can't Stop Mocking Sean Hannity and Fox News for Their Obsession With Her, and 'The Daily Show' Even Got in on the Act 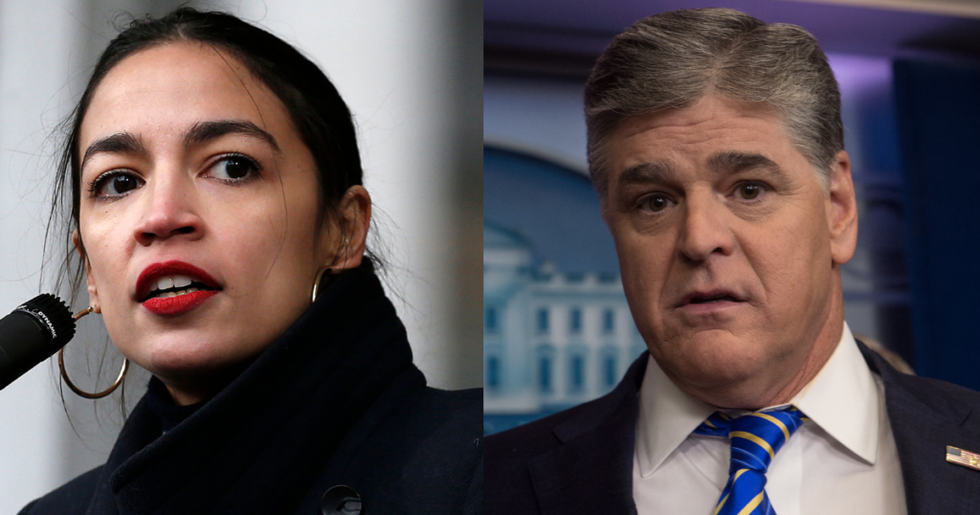 Congresswoman Alexandria Ocasio-Cortez on Wednesday ripped into Fox News over Sean Hannity's obsession with her, prompting The Daily Show to join in the fun.

Ocasio-Cortez said Tuesday she supports a 70 percent marginal tax on incomes over $10 million and has railed against the American economic system which allows a few people to amass vast fortunes while millions live in poverty.

“I do think that a system that allows billionaires to exist when there are parts of Alabama where people are still getting ringworm because they don’t have access to public health is wrong," Ocasio-Cortez told journalist and author Ta-Nehisi Coates. “I don’t think that necessarily means that all billionaires are immoral. It is not to say that someone like Bill Gates, for example, or Warren Buffett, are immoral people," she added, later clarifying she was referring to "hookworm."

Thus after Hannity tried to spin Ocasio-Cortez's message as anti-American, the Congresswoman clapped right back on Twitter, true to form.

"I also love that such an Official TV News Network™ called him “policy guy” as his official title," the Congresswoman wrote. "What are they trying to do, compete with the Daily Show? Or is Fox News actually just elaborate, postmodern performance art? Have we been misreading it this whole time??"

The Daily Show replied: "We'll never be as funny tho."

So did the Mediaite writer who referred to Riffle as the "policy guy."

Some thought that "performance art" was too nice of a term for Fox, and so an alternative was proposed.

Fox brings the mockery upon itself.

Earlier Wednesday, The Daily Show joked that Hannity would invite President Donald Trump to give the State of the Union address from his house. Trump caved to House Speaker Nancy Pelosi's (D-CA) demand that he postpone his annual address until the government shutdown, now on its 34th day, ends.

Hannity ended up doing exactly that.