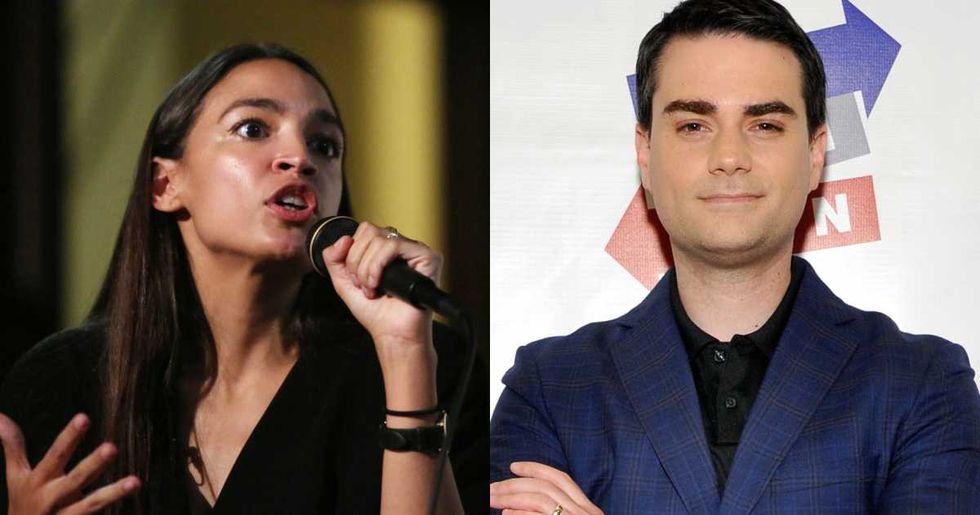 Conservative commentator Ben Shapiro said that he would donate $10,000 to self-described Democratic Socialist Alexandria Ocasio-Cortez's campaign if she agreed to debate him. Then she fired back.

“Miss Ocasio-Cortez, I’m really excited that you’ve been elevated to that position and I would love to have a real conversation with you about the issues. You’ve noted that you think Republicans are afraid to debate you or talk to you or discuss the issues with you. Not only am I eager to discuss the issues with you, I’m willing to offer $10,000 to your campaign today for you to come on our Sunday special," Shapiro said on "The Ben Shapiro Show."

Shapiro initially tweeted a video in which he mocked Democratic National Committee chairperson Tom Perez for referring to Ocasio-Cortez, whose upset win over incumbent Representative Joe Crowley in New York's 14th congressional district sent shockwaves through the Democratic Party, as the "future of the Democratic Party,” before challenging her.

Ocasio-Cortez did not respond right away, a point which did not escape Fox News's coverage.

.@benshapiro challenges Alexandria Ocasio-Cortez to debate: "I've heard nothing at this point, nor do I expect to h… https://t.co/IVwcLoM1LA
— FOX Business (@FOX Business) 1533819447.0

But then, later that evening, she did.

"Just like catcalling, I don’t owe a response to unsolicited requests from men with bad intentions," she said of Shapiro's request. "And also like catcalling, for some reason they feel entitled to one."

But sure, go with “the Orthodox Jew who has never catcalled a woman in his life is ACKSHUALLY a sexist catcaller fo… https://t.co/Dn6runYiYD
— Ben Shapiro (@Ben Shapiro) 1533866176.0

Although Ocasio-Cortez has not engaged Shapiro again, he has shared numerous criticisms of Ocasio-Cortez's response from conservative voices, some of which are featured below.

It’s not about “owing” a response. It’s about stepping up to the plate and defending your platform against someone… https://t.co/OAaJXdorqg
— Allie Beth Stuckey (@Allie Beth Stuckey) 1533865767.0

While Ocasio-Cortez's response spotlights the, as Alternet puts it, "gendered dimension" of the attention she has received––she has been subject to increased attacks from the right and has had her credentials questioned by many who have not expected more established male candidates to justify their candidacy the same way––it's important to note that Ocasio-Cortez has run a quintessentially grassroots campaign and that she has refused to accept donations from super PACs and other members of the political establishment. Accepting Shaprio's offer would compromise that.

Ocasio-Cortez was the first person to challenge Joe Crowley in the Democratic primary since 2004, and she won despite being at a significant financial disadvantage.

"You can't really beat big money with more money. You have to beat them with a totally different game," she said in May.

Ocasio-Cortez has been traveling in recent weeks and speaking at town halls, in the hope of galvanizing a progressive wave to take control of Congress this November. She made headlines this week after she questioned why Congress seems to have no money when it comes to paying for “Medicare for all” but seems to have no problem finding the funds to support “unlimited war” and tax cuts for the wealthiest Americans.

Healthcare for all Americans “is not a pipe dream. Every other developed nation does this––why can’t America?” Ocasio-Cortez asked.

She continued, calling out the Republican Party for its spending habits, saying that the United States only has “empty pockets when it comes to the morally right things to do”:

We write unlimited blank checks for war. We just wrote a $2 trillion check for that GOP tax cut and nobody asked those folks how they are going to pay for it…Why is it that our pockets are only empty when it comes to education and health care for our kids? Why are our pockets only empty when we talk about 100 percent renewable energy that is going to save this planet and allow our children to thrive?… We only have empty pockets when it comes to the morally right things to do. When it comes to tax cuts for billionaires and when it comes to unlimited war, we seem to be able to invent that money very easily. To me, it belies a lack of moral priorities that people have right now, especially the Republican Party.