Before Being Deported to Mexico, the Wife of an Iraq War Veteran Just Sent Donald Trump a Blistering Message 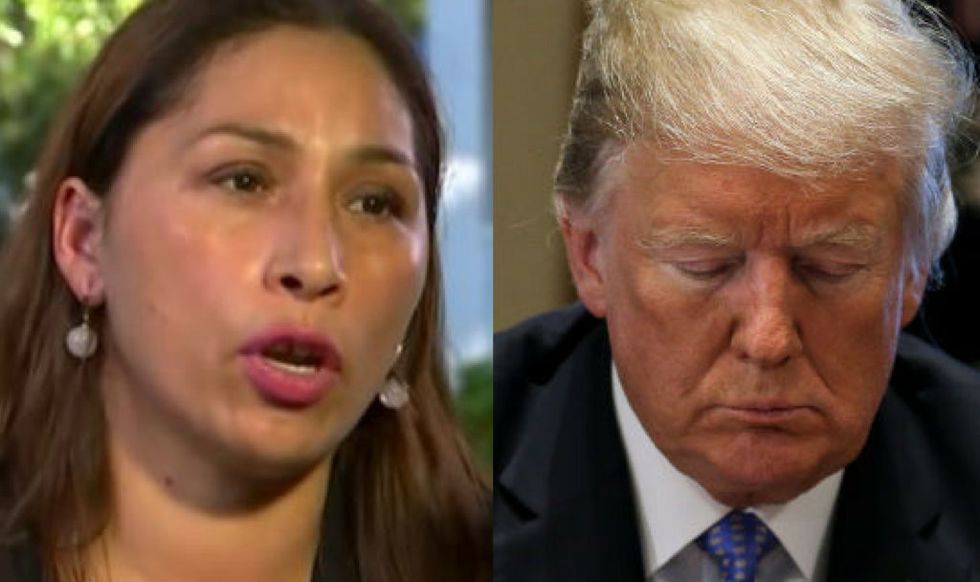 It's well-documented by now that the Trump administration didn't hesitate to separate immigrant children from their families, so it shouldn't be surprising that it's willing to separate husbands and wives as well.

That's what happened to Alejandra Juarez, who was deported to Mexico on Friday after living in the United States for two decades. Despite her husband, Cuauhtemoc “Temo” Juarez, being a military veteran who served two years in a combat unit in Iraq as well as two other tours overseas, Immigration and Customs Enforcement (ICE) did not make efforts to keep the military family together. Temo will now have to work over time to support the family. The family's local congressman, Darren Soto (D-FL), who'd been assisting in an effort to extend Juarez's residence in the United States, vowed not to give up on the family.

After a tear-filled goodbye to her husband and young daughters, Juarez left a scathing message for President Donald Trump:

I hope this makes you happy. May God forgive you.

Activists and journalists covered Juarez's heartbreaking goodbye to her husband as well as her 16 and eight-year-old daughters.

Alejandra Juárez, a Central Florida mother of two children and the wife of a U.S. Marine, is being deported today b… https://t.co/aMbd7RTVFw
— Monivette Cordeiro (@Monivette Cordeiro) 1533295816.0

In 2013, Juarez was pulled over in a traffic stop and an officer discovered her to have been in the country illegally. At the time, United States Military spouses were not prioritized for deportation. Because Juarez's husband is a veteran, authorities told her to simply check in semiannually.

The previous administration's relaxed approach to undocumented spouses of U.S. Military members seems to be a thing of the past.

There are currently nearly 12 thousand service members whose spouses are facing deportation. The Trump administration has increasingly rejected veterans reaching out for assistance in remaining with their spouses. It appears that Juarez was one of those who went ignored.

Juarez wrote a letter asking the president to step in, hoping that her husband's service in the military would strike in him a merciful chord, but it was to no avail.

The coverage of Juarez's deportation made the inhumanity of the zero tolerance policy searingly clear.

@AnthonyNBCNews Very hard to sympathise with this man when he literally voted for this to happen to other families
— Xavidub (@Xavidub) 1533218950.0

The haunting footage of Juarez's goodbye--and her message to Donald Trump--has conveyed a sense of urgency in some and a sense of despair in others. It's unclear if the administration will ever show leniency. As Juarez's case shows, the administration's ire toward unauthorized immigrants seems to be devoid of moral limits.