This is worth fighting over. 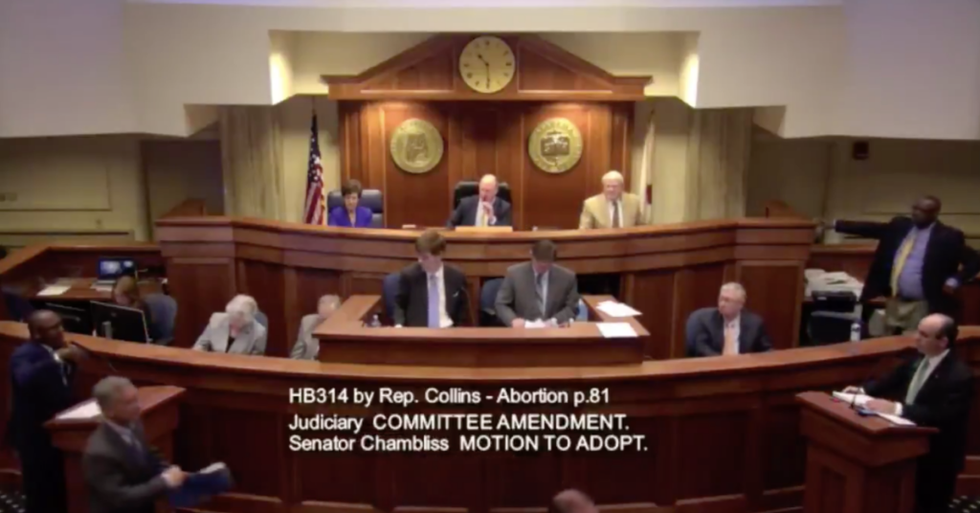 The Alabama Senate placed a highly contentious abortion measure on hold following a shouting match on the Senate floor.

The bill would make performing an abortion a felony punishable by up to 99 years imprisonment. Chaos erupted after Senate Minority Leader Bobby Singleton (D) requested a roll call vote on every question surrounding the bill. Singleton and other Democrats accused Alabama Lieutenant Governor Will Ainsworth of forcing the legislation through the Senate and ignoring their concerns as Ainsworth moved swiftly for a voice vote on an amendment.

“You’ve got 27 men over on the other side ready to tell women what they can do with their bodies," Singleton said. “You don’t have to procedurally just try to railroad us.”

You can watch what happened in the video below:

Once the ruckus died down, Senate President Pro Tempore Del Marsh (R) announced a vote on the measure, which amounts to an almost total ban on abortion except in cases that would pose a serious health risk to the mother, would be pushed to next week.

Terri Collins, a Republican member of the Alabama House of Representatives who sponsored the bill, says the measure was made specifically to challenge Roe v. Wade, the landmark 1973 decision that guarantees a woman’s right to abortion, and rise to the Supreme Court.

"I hear it has a good chance" of getting to the Supreme Court,” Collins said. "We've had a lot of the pro-life lobbyists working on it. We have a lot of national groups working on it."

Rep. Rich Wingo, a Republican House member who also worked on the measure, confirmed that Republicans are taking a more aggressive stance, after previous attempts to criminalize abortion in the state failed.

“The others haven’t worked," he told reporters. "We are going right through the front door directly after Roe.”

The spectacle on the Alabama Senate floor prompted many critics of the measure to rally for reproductive rights.

This is appalling. I don’t even have the words to express my disappointment & fear about the direction our country… https://t.co/9FYN6grb6F
— Sydney Poretsky (@Sydney Poretsky) 1557416652.0

I'm proud of Democrats standing up for women's rights in the Alabama Senate when Republicans are trying to railroad… https://t.co/e8CgmOLWnx
— Grant Stern (@Grant Stern) 1557422574.0

Randall Marshall, executive director of the American Civil Liberties Union of Alabama, said the Alabama Senate has more abortion measures in the "appellate pipeline" and characterized the current bill as a waste of taxpayer funds.

“With all of the problems that we face here in Alabama that cry out for funding, …. it makes no sense for this body to pass a bill that is just to going to add to the taxpayers’ bill and does nothing to address the real problems in Alabama,” Marshall said.