Democratic Congressman Asks Bank CEOs Whether Their Successor Will Be a Woman or a Person of Color, and Their Response Was Painfully Predictable 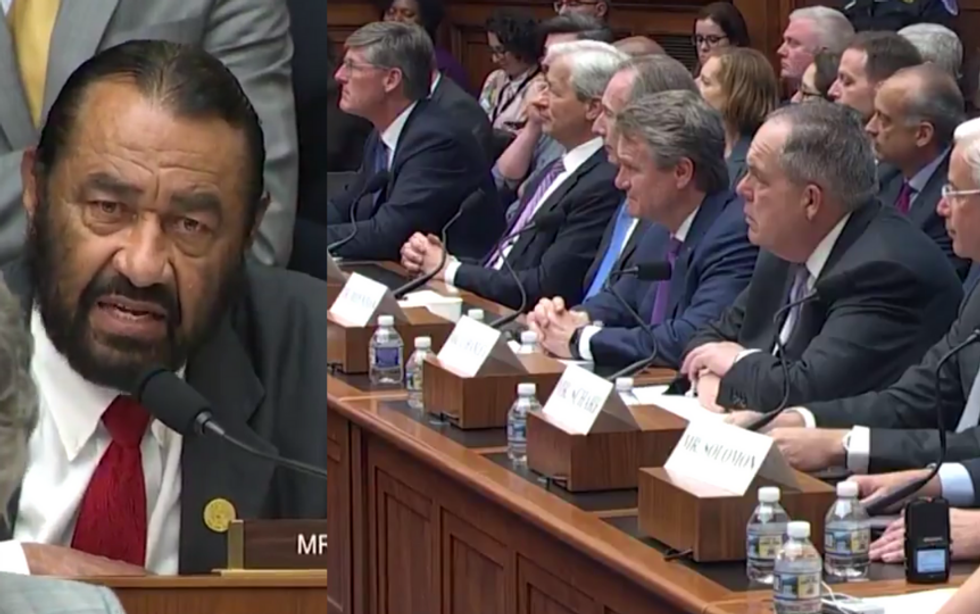 How many CEOs of the country's largest financial institutions think their successors will be women or people of color? If you guessed "none," you'd be right.

CEOs from the largest U.S. banking institutions, including JP Morgan Chase and Bank of America, testified before the House Financial Services Committee today at a hearing called "Holding Megabanks Accountable: A Review of Global Systemically Important Banks 10 Years After the Financial Crisis." Looking at the row of panelists, Rep. Al Green had a question.

"The eye would perceive that the seven of you have something in common," Green said. "You appear to be white men."

Then he very politely went for the jugular. "If you believe that your likely successor will be a woman or a person of color, would you kindly extend a hand into the air."

Not a single megabank CEO raised his hand.

"All white men, and none of you, not one, appears to believe that your successor will be a female or a person of color," said Green.

When asked whether those banks might have a woman or a person of color in the next decade, five of the panelists raised their hands. So that's something.

Jamie Dimon of JPMorgan Chase & Co. and Morgan Stanley’s James Gorman were the only two panelists who did not believe they might have a woman or a person of color as CEO in the next ten years.

@kylegriffin1 Not a question that would have even occurred to any of the white men on the committee. That is why representation matters.
— Lisa kaihara (@Lisa kaihara) 1554918407.0

"I know it's difficult to go on the record sometimes," Green said, "but the record has to be made."