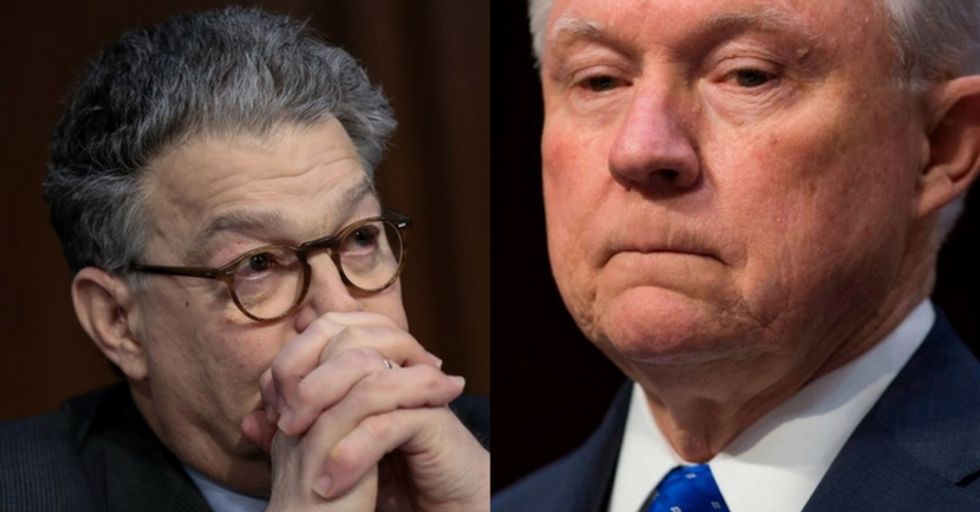 Senator Al Franken has some questions, about 8 pages' worth, for Attorney General Jeff Sessions about Russia and Sessions' Senate testimony.

The Minnesota Democrat sent a lengthy letter to Sessions Thursday, asking for his own account of interactions between the Trump campaign and Russian operatives. It follows in the wake of a guilty plea by a former Trump foreign policy adviser for lying to federal agents about his own contact with Russians.

Russia's ties to the Trump campaign have been a bone of contention since Sessions’ Senate confirmation hearing for Attorney General.

During that hearing, then Senator Jeff Sessions responded to a question from Franken with a claim he had no interaction with any Russians during the campaign. However Sessions later stated he met several times with the Russian ambassador.

At an October Senate Judiciary hearing, under questioning from Franken, Sessions said he was unaware of any communications between Trump campaign surrogates and Russians. He added his disbelief that any occurred.

“I don’t believe it happened,” Sessions said at the time.

Court documents state Papadopolous was present at a meeting with Sessions and Donald Trump where he discussed arranging a meeting between Trump and Russian President Vladimir Putin.

And this fact is at the crux of Senator Franken's letter.

“You failed to tell the truth about your interactions with Russian operatives during the campaign,” Franken wrote Sessions on Thursday.

This is an alarming pattern in which you, the nation’s top law enforcement officer, apparently failed to tell the truth, under oath, about the Trump team’s contacts with agents of Russia — a hostile foreign power that interfered with the 2016 election.”

Senator Franken asked AG Sessions to respond within the next two weeks to his questions. In his letter, Franken asks Sessions for his version of events described in Papadopoulos’ indictment documents. Those include e-mails and meetings where the policy adviser tried to set up meetings between Donald Trump and known Russian agents or Russian president Vladimir Putin.

“We must get to the bottom of what happened so that we can prevent it from happening again,” Franken wrote.

The Justice Department declined to comment at this time.

.@SenFranken: "I have a lot of questions for the Attorney General." WATCH: pic.twitter.com/vw8QYum4ka