Mitch McConnell's Campaign Used a GIF of Adam Scott to Make a Questionable Point, and Scott Just Clapped Back Hard 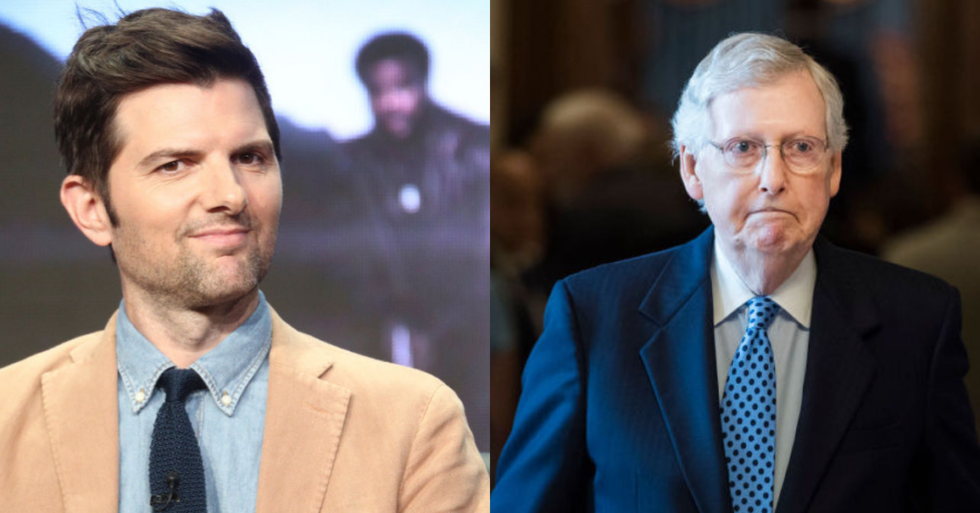 Celebrities have minimal control over the use of their likeness, especially with memes and gifs. But they can still speak out when they see their image used to promote an agenda or person they oppose. And that is what actor Adam Scott did after seeing a gif of himself used by Team Mitch.

Team Mitch is the official Twitter account for Mitch McConnell for Senate. McConnell is the embattled Republican Senate Majority Leader who routinely gloated about using his position to obstruct legislation and President Barack Obama's appointments and nominees.

On Monday evening, Team Mitch posted this gif on Twitter.

The Adam Scott gif was a response to an article posted by The Hill Senior Washington Correspondent Saagar Enjeti. The article reported President Trump "tells us on-camera he would fill Supreme Court vacancy before 2020 election despite past support of [Republican] decision on Merrick Garland."

Team Mitch included a link to The Hill article in their post.

When actor Adam Scott saw how his likeness was used, he responded.

"Dear Mitch McConnell & all those representing him,"

"Please refrain from using my image in support of anything but your own stunning & humiliating defeat. Thanks!"

Dear Mitch McConnell & all those representing him, Please refrain from using my image in support of anything but y… https://t.co/xZNayVslXJ
— Adam Scott (@Adam Scott) 1561568584.0

McConnell's team decided to reply with a fake newspaper clipping created for the show Parks and Recreation with Scott's character Ben Wyatt. The reason was a mystery as they included no caption.

Parks and Recreation followed the formula of filming their show like a documentary, made popular by the show The Office.

But since Team Mitch decided to share an embarrassing story from a fictional character's fictional past to counter Scott, the actor did one better by sharing a real photo from the real life of Mitch McConnell.

And people tagged Adam Scott to make him aware.

However one person suggested a gif Team Mitch could use without any backlash.

In addition to Parks and Recreation, Scott also did The Good Place. He most recently played Ed Mackenzie in Big Little Lies. The actor won awards and critical acclaim for the 2009 film The Vicious Kind with veteran actor J.K. Simmons and Brittany Snow.

A complete set of Parks and Recreation is available here.

The Vicious Kind is available as part of a triple feature here.