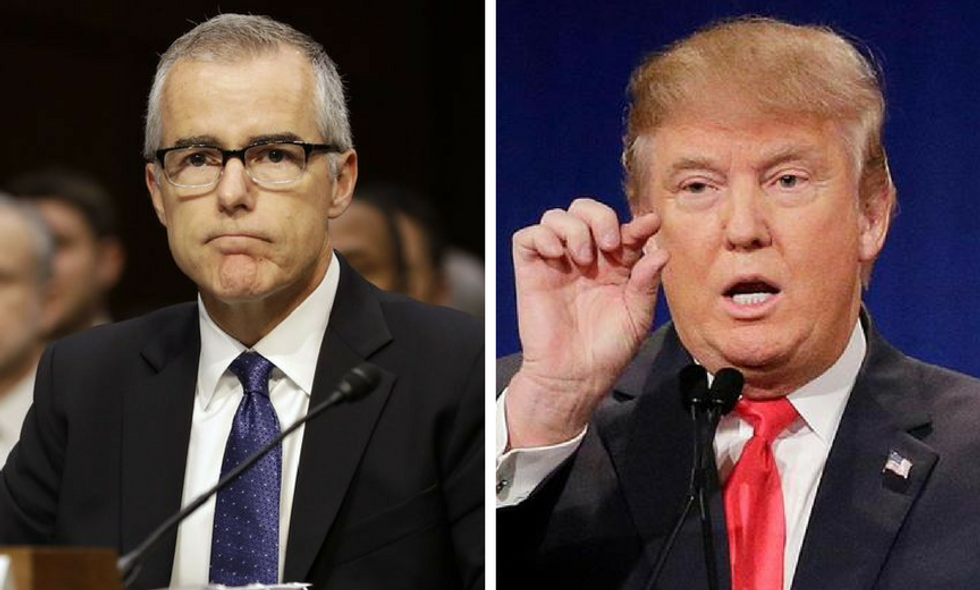 On Thursday, two days after Donald Trump fired FBI Director James Comey, the now acting head of the FBI, Andrew McCabe, testified in front of an open session of the Senate Intelligence Committee alongside other intelligence agency heads. In the previously scheduled hearing, the questioning focused largely on Comey's firing and in his testimony, McCabe repeatedly contradicted White House claims.

On Wednesday, in her effort to explain Comey's sudden firing, White House Deputy Press Secretary Sarah Huckabee Sanders asserted "the rank-and-file members within the FBI had lost confidence in the director." It was a claim that White House defenders from Kellyanne Conway to Paul Ryan would go on to repeat. But in his testimony on Thursday, McCabe directly contradicted this, saying, "Director Comey enjoyed broad support within the FBI and still does to this day." He added, "I can confidently tell you that the vast majority of FBI employees enjoyed a deep, positive connection to Director Comey."

Further, in his letter firing Comey, Donald Trump made a point of thanking Comey for "informing [him], on three separate occasions, that [he] is not under investigation." During Thursday's Senate Intelligence hearing, McCabe was asked whether such conversations between the FBI Director and a potential target of an investigation was "standard practice." While McCabe said he could not comment directly on any conversation between James Comey and the President, he assured the committee that a conversation like that was not standard practice for the FBI.

Another standard talking point from the White House on the Russia investigation is that, as Sarah Huckabee Sanders told Fox News on Wednesday, "There is no 'there' there. It's time to move on." She went on to say this investigation is “one of the smallest things that they’ve got going on their plate.” Yet McCabe, in his testimony on Thursday, contradicted this portrayal as well, telling Senator Angus King that "we consider it to be a highly significant investigation."

If Trump had hoped to put the Russia investigation behind him with the ouster of Comey, he seems to have badly miscalculated, instead fanning the flames of the investigation even further.

"It's hard to avoid the conclusion that the president's decision to remove Director Comey was related to the Russia investigation," Senator Warner concluded at the hearing, "and that is truly unacceptable."

McCabe assured Senators that "the FBI will continue to pursue this investigation vigorously and completely."