Sarah Sanders Just Posted a Questionable Video of Jim Acosta Supposedly 'Placing His Hands' on a White House Intern, and People Are Calling Her Out 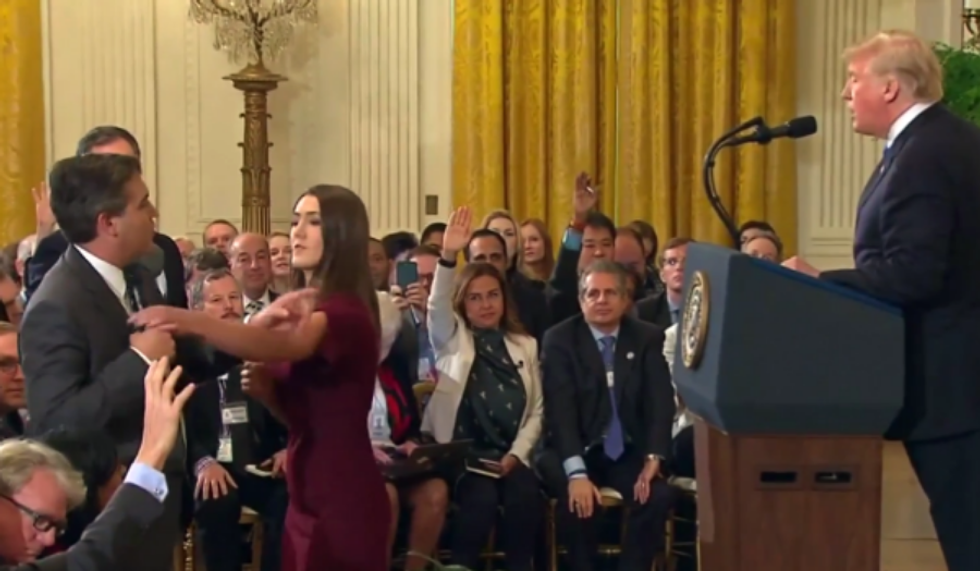 Wednesday during a verbal sparring match between President Donald Trump and CNN White House correspondent Jim Acosta—during a press conference described as "off the rails"—a White House intern attempted several times to grab the microphone from Acosta's hand while he spoke with the President.

Video of the interaction with the President and the actions of the White House intern was widely shared immediately after the press conference.

Then that night, Acosta reported on Twitter that his press credentials were revoked at 7:46pm EST.

Sarah Huckabee Sanders made a statement to the press regarding the decision to revoke Acosta's credentials, stating the CNN employee "put his hands" on the intern who was "only doing her job."

President Trump believes in a free press and expects and welcomes tough questions of him and his Administration. We… https://t.co/XxV2eSklwK
— Stephanie Grisham (@Stephanie Grisham) 1541638103.0

This conduct is absolutely unacceptable. It is also completely disrespectful to the reporter’s colleagues not to al… https://t.co/k12sulMUGb
— Stephanie Grisham (@Stephanie Grisham) 1541638209.0

Contrary to CNN’s assertions there is no greater demonstration of the President’s support for a free press than the… https://t.co/cu7gB1mwqh
— Stephanie Grisham (@Stephanie Grisham) 1541638395.0

...over the course of 1.5 hours including several from the reporter in question. The fact that CNN is proud of the… https://t.co/v3jPpSuKYr
— Stephanie Grisham (@Stephanie Grisham) 1541638495.0

As a result of today’s incident, the White House is suspending the hard pass of the reporter involved until further notice.
— Stephanie Grisham (@Stephanie Grisham) 1541638598.0

Other members of the media and the White House Correspondents Association (WHCA) all came out in support of Acosta. WHCA posted an official response at 9:26pm EST.

"Journalists may use a range of approaches to carry out their jobs and the WHCA does not police the tone or frequency of the questions its members ask of powerful senior government officials, including the president. Such interactions, however uncomfortable they may appear to be, help define the strength of our national institutions."

Other members of the press, including some that attended the same press conference and sat next to Acosta, added their support.

If this is a decision by the White House because it doesn't like the coverage, it's the first time I can remember t… https://t.co/iJYzawEiPv
— Peter Baker (@Peter Baker) 1541638592.0

The WH is now denying @Acosta access to the WH grounds do his job. This is incredibly concerning. https://t.co/lnZICQIGim
— Yamiche Alcindor (@Yamiche Alcindor) 1541638651.0

This is not what happened. You could have banned him simply for refusing to abide by any of the normal rules of the… https://t.co/XaiFB9PI7x
— Ben Shapiro (@Ben Shapiro) 1541641061.0

So to silence critics, Sanders shared video as proof of the incident.

At 10:33pm EST, Sanders shared footage missing the audio, zoomed in and repeated. Critics on Twitter cited the alteration of the speed of the footage as well.

We stand by our decision to revoke this individual’s hard pass. We will not tolerate the inappropriate behavior cl… https://t.co/xLP6P2Mm9k
— Stephanie Grisham (@Stephanie Grisham) 1541647999.0

People are calling out the source of the video and saying it was doctored.

This video is doctored. It's slowed down and then sped up at the moment Acosta's hand comes down to make it look li… https://t.co/xO0EGxJByO
— Dana Schwartz (@Dana Schwartz) 1541654238.0

The government is literally falsifying evidence to wrongfully accuse a private citizen of a crime in order to revoke his rights.
— Dana Schwartz (@Dana Schwartz) 1541654614.0

The video was created by alt-right personality Paul Joseph Watson of Prison Planet, an affiliate of Infowars, known for their conspiracy theories and disproven evidence.

However video of the full interaction was already widely available online without the alterations. CNN shared it again as proof that any contact between Acosta and the intern was initiated by the intern and inadvertent on the part of Acosta, who immediately says "Pardon me, ma'am" when his already lowering hand touches her.

In response, Sarah Burris of Raw Media shared her own video only slowed down and showing the full interaction with the intern.

Whether Acosta regains his credentials and whether there are repercussions for Sanders sharing altered video from a known conspiracy theorist—to accuse a private citizen of actions they did not commit—remains to be seen.