The Snowden Film Gets Its Release Today. Could a Pardon Follow? 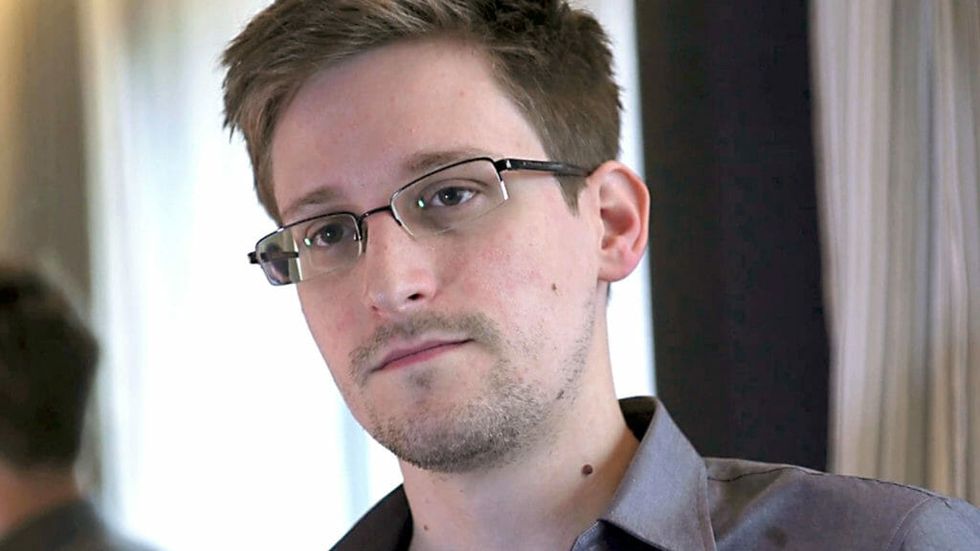 Former U.S. spy agency contractor Edward Snowden is interviewed by The Guardian in his hotel room in Hong Kong...Former U.S. spy agency contractor Edward Snowden is seen in this still image taken from video during an interview by The Guardian in his hotel room in Hong Kong June 6, 2013. Snowden was on July 24, 2013 granted documents that will allow him to leave a Moscow airport where he is holed up, an airport source said on Wednesday. The official, who spoke on condition of anonymity, said Snowden, who is wanted by the United States for leaking details of U.S. government intelligence programmes, was expected to meet his lawyer at Sheremetyevo airport later on Wednesday after lodging a request for temporary asylum in Russia. The immigration authorities declined immediate comment. Picture taken June 6, 2013. MANDATORY CREDIT. REUTERS/Glenn Greenwald/Laura Poitras/Courtesy of The Guardian/Handout via Reuters (CHINA - Tags: POLITICS MEDIA) ATTENTION EDITORS - THIS IMAGE WAS PROVIDED BY A THIRD PARTY. FOR EDITORIAL USE ONLY. NOT FOR SALE FOR MARKETING OR ADVERTISING CAMPAIGNS. NO SALES. NO ARCHIVES. THIS PICTURE IS DISTRIBUTED EXACTLY AS RECEIVED BY REUTERS, AS A SERVICE TO CLIENTS. NO THIRD PARTY SALES. NOT FOR USE BY REUTERS THIRD PARTY DISTRIBUTORS. MANDATORY CREDIT

This week, the American Civil Liberties Union (ACLU) joined several prominent human rights organizations––including Human Rights Watch and Amnesty International––to launch a formal campaign asking President Obama to pardon National Security Agency whistleblower Edward Snowden. Snowden has been living in an undisclosed location in Moscow and has sought asylum elsewhere since leaking classified information about the NSA’s mass surveillance programs in 2013. The campaign kicked off two days before the premiere of Oliver Stone’s film, Snowden. The human rights organizations created the website Pardon Snowden to promote the case for Snowden across the nation.

Ben Wizner, Snowden’s attorney, believes Stone’s largely sympathetic portrayal of Snowden will “do more for Snowden in two hours than his lawyers have been able to do in three years.” Wizner, who directs the ACLU’s Speech, Privacy, and Technology Project, detailed the campaign’s objectives after a screening of the film at the Brooklyn Public Library. "We are going to be doing both a mass signature campaign around the world and trying to get prominent individuals and organizations to join our call to President Obama to pardon Snowden before he leaves office," he said.

Snowden’s legal team will make the case for a pardon before Obama leaves office at the end of the year. Speaking to a reporter at the Toronto Film Festival, Oliver Stone said that he is hopeful Obama will pardon Snowden, but that he has reservations that it will actually happen. "Mr. Obama could pardon him, and we hope so. We hope Mr. Obama has a stroke of lightning, and he sees the way," the Academy Award-winning director said at the time.

However, Stone noted that Obama’s administration has prosecuted more whistleblowers under the Espionage Act than previous administrations and that Obama himself has overseen an expansion of the NSA’s global surveillance network since Snowden fled the United States. "He's been one of the most efficient managers of this surveillance world. His is the most extensive, invasive surveillance world that has ever existed. He created it, built it," Stone said. "So rationally it doesn't figure [a pardon is possible], but we hope, we hope.”

A former CIA officer has also come forward to support the initiative to pardon Snowden. “All nations require some secrecy. But in a democracy, where the government is accountable to the people, transparency should be the default; secrecy, the exception. And this is especially true regarding the implementation of an unprecedented system of domestic bulk surveillance,

a mere precursor of which Senator Frank Church warned 40 years ago could lead to the eradication of privacy and the imposition of ‘total tyranny,’” writes Barry Eisler, who spent three years in a covert position in the CIA’s Directorate of Operations. Snowden “did not sell information secretly to any enemy of America,” Eisler continued, noting that Snowden instead shared this information with the press and the public.

Eisler argued that Snowden performed a “service” which prompted his detractors to cite national security concerns. “As always, the charge is backed by nothing but air, and ignores—in fact, is intended to distract from—the real damage caused by metastasizing governmental secrecy,” he wrote in an op-ed for TIME. “This includes not only disastrous government mistakes and cover-ups (see the Bay of Pigs, the “missile gap,” the Gulf of Tonkin, Iraqi weapons of mass destruction, etc.), but also the ongoing strangulation of democracy itself. The nation is not made more secure, but is instead more fragile, when the government knows more and more about the people and the people know less and less about the government.”

The Espionage Act dates back to World War I and does not distinguish between whistleblowers who deliver documents alleging illegal government activity to journalists and spies who leak information to foreign governments. Winning a case under the law would be difficult, says Ben Wizner, because the law forbids him from presenting evidence about congressional reforms since Snowden first leaked classified information. "Unless the government is willing to consider charging him with something appropriate, there's not going to be a trial if we have anything to say about it. That doesn't mean there couldn't be some other kind of agreement," Wizner said. "We think the proper response to Edward Snowden shouldn't be what the punishment should be, it should be how to thank him. And until that's the case, he is living safely where he is.”