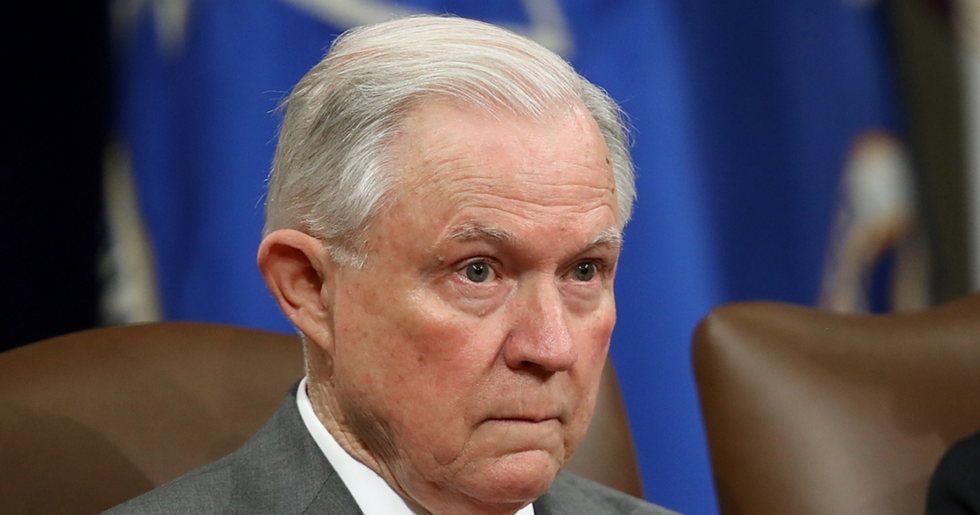 A federal judge in Washington D.C. threatened to hold Attorney General Jeff Sessions in contempt of court on Thursday after he learned the Department of Justice tried to deport a mother and daughter who were awaiting a court date for an appeal of a prior deportation order.

The judge ordered the government to turn the plane around and bring the asylum-seeking mother and child back to the… https://t.co/DEMPbkAwyC
— ACLU (@ACLU) 1533838591.0

Sessions and the Justice Department are the defendants in a lawsuit filed by the American Civil Liberties Union earlier this week, which alleges the federal government's new policy of rejecting asylum claims based on domestic and gang violence is "blocking thousands of migrants from seeking asylum in the United States," according to the Washington Post.

"Without an injunction, Plaintiffs and thousands of other immigrants like them desperately seeking safety will be unlawfully deported to places where they fear they will be raped, kidnapped, beaten, and killed," the complaint says.

The woman in question, "Carmen," had her case delayed until 11:59 P.M. Thursday night, but was escorted onto a plane along with her daughter Thursday morning in San Antonio, Texas to be thrown out of the country.

"This is pretty outrageous," Sullivan said. "That someone seeking justice in U.S. court is spirited away while her attorneys are arguing for justice for her?"

I’m not happy about this at all... this is not acceptable.

Sullivan then ordered Sessions to "turn the plane around" as part of his decision to stay Carmen's removal. Justice Department attorney Erez Reuveni told the court he didn't know where Carmen and her daughter were or whether they had yet left the United States.

Lawyers for the federal government later confirmed the pair were on their way to El Salvador and that the plane had been instructed to return, per the court's order.

The ACLU said the "disregard for commitments made to the court and the life or death circumstances that these immigrant women and children are facing is beyond unacceptable."

This disregard for commitments made to the court and the life or death circumstances that these immigrant women and… https://t.co/JCKeJsvp71
— ACLU (@ACLU) 1533838591.0

The ACLU responded to the court's decision and blasted the Justice Department for its treatment of asylum-seekers.

"In its rush to deport as many immigrants as possible, the Trump administration is putting these women and children in grave danger of being raped, beaten, or killed," said Jennifer Chang Newell, the ACLU attorney handling the case. "We are thrilled the stay of removal was issued but sickened that the government deported two of our clients — a mom and her little girl — in the early morning hours. We will not rest until our clients are returned to safety."

Co-counsel Eunice Lee of the University of California-Hastings Center for Gender and Refugee Studies also commented on the case.

"It must have been absolutely terrifying for them to think they would be returning to a country where they raised very credible claims of persecution and death," Lee said. "It’s outrageous to me that while we were working around-the-clock filing briefings for this case’s early morning hearing that people in the government were actively arranging for Carmen’s deportation."

Social media rallied in support of the ACLU, Carmen, and her daughter.

@ACLU Good. And again, everyone in the USA: Tell Congress to do its job and #RemoveSessions & #ImpeachTrump for all of their many crimes.
— Michael Busch (@Michael Busch) 1533839337.0

@ACLU That would be amazing. Sessions and all these other officials need to be held in contempt!
— LadyLiberty (@LadyLiberty) 1533839667.0

@ACLU I hope the judge follows through if necessary. This admin believes the other branches can't stand up to them.
— Coyotefe (@Coyotefe) 1533839277.0

Looks like the judge isn't the only person who holds Sessions in contempt.

@washingtonpost When they continue to go consequence free, why should they comply? I hope AG Sessions is held in co… https://t.co/VsRByhi3ls
— Alicia Flanery (@Alicia Flanery) 1533838018.0

The rule of law and the Constitution live to see another day.