Georgia's Republican Candidate for Governor Just Pulled Out of His Final Debate to Attend a Trump Rally, and Now He's Blatantly Lying About It

Up is down and water is dry. 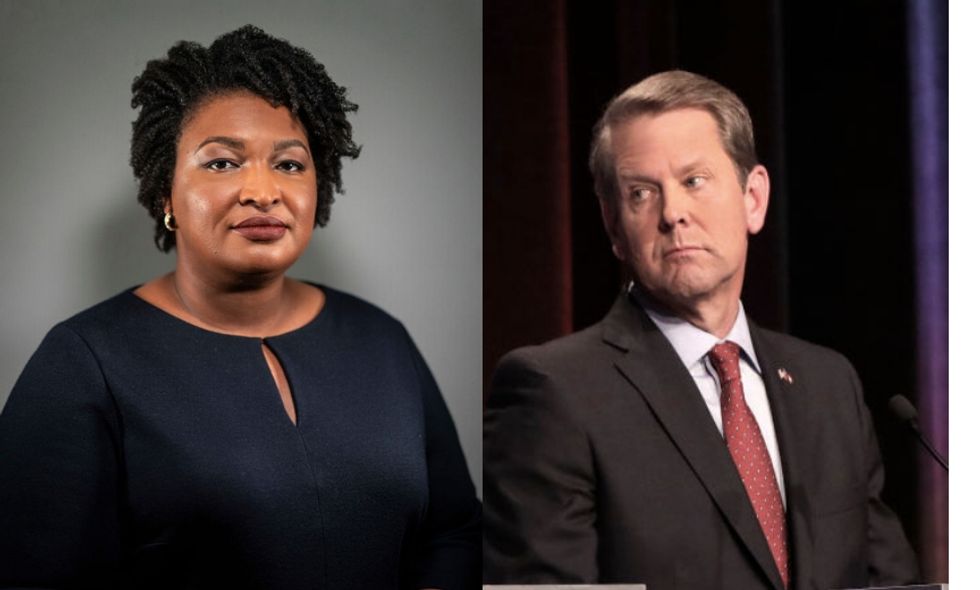 Stacey Abrams and Brian Kemp may be vying for voters in Georgia, but the campaign between the two ideological opposites has captivated the nation.

What was supposed to be the second and final televised debate has now been cancelled as Kemp, who is also Georgia's secretary of state, has opted to instead join President Donald Trump at a just-announced campaign rally in Macon.

The Kemp campaign said in a statement:

"Earlier today, radical Stacey Abrams announced that she will not participate in the WSB-TV debate...Abrams is ducking Georgia voters because she can't defend her extreme, radical agenda on live television."

Representatives for Kemp claimed to have tried to reschedule the debate for the night before the election, but Abrams chose to keep her remaining commitments to meet with Georgia voters instead of rescheduling a debate that had been on the books for six weeks. To the Kemp campaign, this somehow meant that she was to blame.

“We believe it would be irresponsible to break our commitment to accommodate his failures.” In lengthy statement,… https://t.co/smqFRdaN1B
— Greg Bluestein (@Greg Bluestein) 1541031077.0

The Abrams campaign said in another statement:

"Brian Kemp says he wants to be our next governor, but he's breaking his promise to show up for the job interview. This isn't a surprise since his entire career has been defined by his failure to keep his commitments."

WSB, the station that was set to air the debate confirmed that, despite the Kemp campaign insisting that the blame rested with Abrams, it was in fact Kemp's team that pulled out of the debate. The Kemp campaign's statement on the matter was false.

Now, people are calling out Kemp for lying about the decision.

@BrianKempGA "On Tuesday, six weeks after agreeing to participate, Kemp canceled his appearance in the debate. Abra… https://t.co/V5oSuss2aK
— cynsight (@cynsight) 1541032462.0

The lie appears to have backfired.

The announcement seems to have only boosted favor for Abrams, who - in the face of Kemp's attempts at voter suppression and now his lie about the debate - is widely regarded as the nobler candidate.

Many are now asking what will air instead. People have a lot of opinions.

@JeffreyCook @wsbtv I assume that @wsbtv will now give the hour to @staceyabrams? If he chickens out, she should get the hour
— Dane Venable (@Dane Venable) 1541007968.0

@JeffreyCook @chrislhayes @wsbtv They need to do aan hour with @staceyabrams like CNN did with @BetoORourke
— Dean Smith (@Dean Smith) 1541013042.0

WSB, the station set to air the debate, has been vague about what will happen in its place.

While Kemp leapt at the chance to join Trump at a campaign rally, Abrams isn't without influential endorsements either. The Democratic candidate for governor is campaigning with billionaire media mogul Oprah Winfrey today.