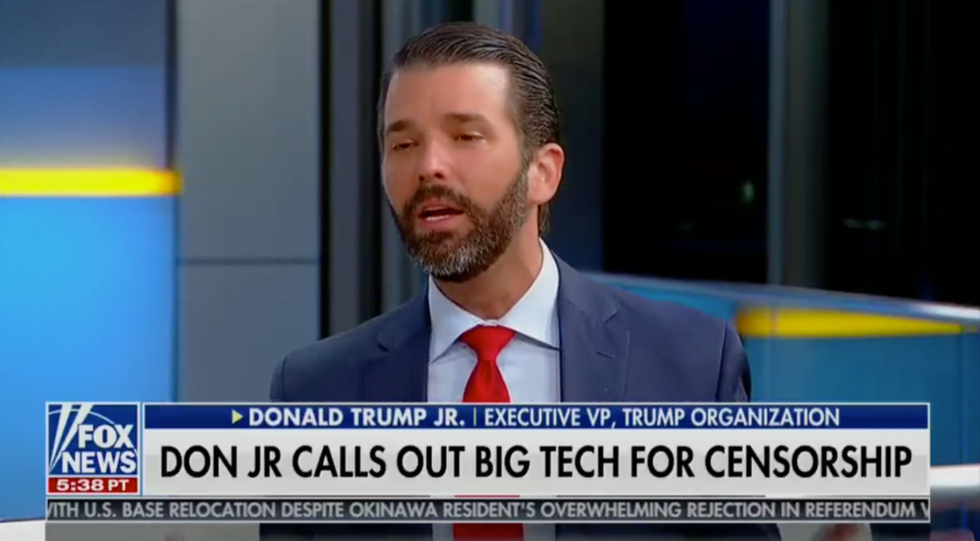 Fox and Friends is beloved by President Donald Trump and his supporters, largely because of what many see as a willingness to subvert facts in favor of perpetuating a positive portrayal of the current administration.

Such was the case in Donald Trump Jr.'s appearance on the show Monday morning. Claims like the majority of hate crimes being hoaxes, the Russia investigation being a witch hunt, and that residents of downtown Chicago shoot Trump supporters on sight went largely unchecked.

On @foxandfriends, independent businessman Donald Trump Jr claims that "there is not one economic metric where we'r… https://t.co/fdwMWOTRYe
— Aaron Rupar (@Aaron Rupar) 1551101868.0

While there has been economic growth under the Trump administration, the economy is growing at a slower rate than it did under Obama, whose policies are widely credited for ending the recession that began under Bush. The unemployment rate also began shrinking at a rapid rate under the Obama administration and continued as Trump inherited the Presidency in 2017.

There is no evidence that Instagram is censoring Donald Trump Jr. or other Conservatives on the basis of political beliefs.

In fact, many of the crimes are recent. The indictment of Trump associate Roger Stone details actions taken by Stone to circulate stolen emails obtained by Wikileaks. Trump's former attorney Michael Cohen, who pled guilty to campaign finance violations, said explicitly that he acted "at the direction of the candidate." These charges and pleas alone are directly related to Trump's 2016 presidential campaign.

The New York Times cites a study by California State University that found fewer than 50 false reports of hate crimes out of 21,000.

Trump Jr.'s willingness to spread a wealth of false or unsubstantiated claims drew the ire of many.

@atrupar Yeah anyone who's been to downtown Chicago knows that it's a terrible, violent, dangerous place full of ba… https://t.co/tItlFUuZsi
— Michał Kranz (@Michał Kranz) 1551103554.0

For all his claims that Instagram is censoring him, Trump Jr. continues to use the platform to disseminate memes chastising Liberals and praising his father.