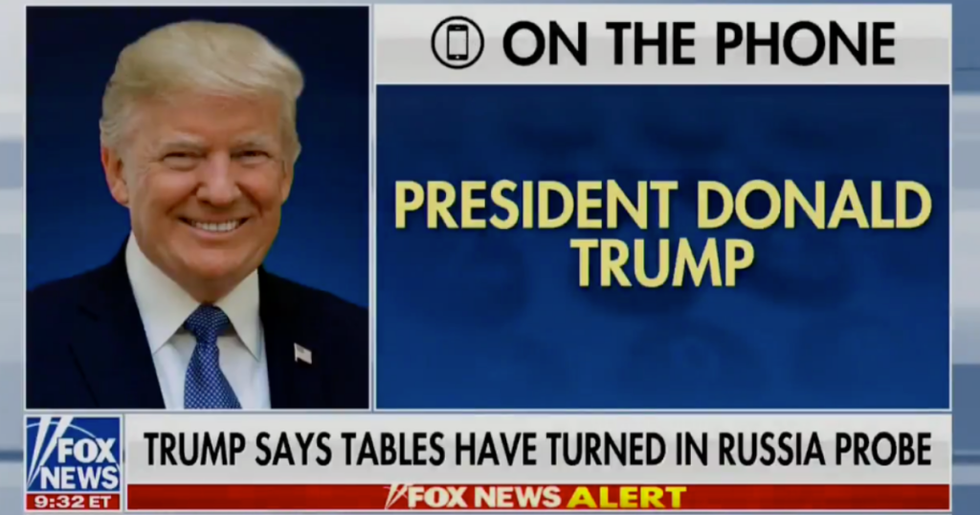 Vox's Aaron Rupar's "main takeaway from Trump's 45 minute interview with Hannity" is that he is "less confident than ever before that we will have a free and fair election next year."

My main takeaway from Trump's 45 minute interview with Hannity is that I am less confident than ever before that we… https://t.co/DcV7PPyR1y
— Aaron Rupar (@Aaron Rupar) 1556244817.0

He reached this conclusion after the absolutely bonkers things Trump rambled about on air, unchecked, on Fox News.

Trump rehashed his belief that his 2016 campaign was "wiretapped" under the orders of President Barack Obama. "Reality, it's a coup," Trump said of the alleged plot. Though there is no evidence this actually occurred, the rumor was rekindled by Attorney General William Barr earlier this month.

Trump accused Hillary Clinton of funneling "hundreds of thousands" of classified emails through "the Weiner server," which is not true.

Trump also said that Clinton "destroyed the lives of people that were on our campaign" and that Special Counsel Robert Mueller's report on Russian election interference "was a coup. This was an attempted overthrow of the United States government," Trump said.

Trump accuses Hillary Clinton of "destroying the lives of people that were on our campaign. She's destroyed their l… https://t.co/FjT88aCy5v
— Aaron Rupar (@Aaron Rupar) 1556242586.0

"This was a coup. This wasn't stealing information from an office in the Watergate apartments. This was an attempted coup. This was an attempted coup and it's inconceivable. Like a third world country," Trump complained. "There are a lot of people that are very nervous about things that are going on," he added, before suggesting that the Justice Department's Inspector General, Michael Horowitz, is on the verge of issuing a "blockbuster" report on FISA warrants issued during the Obama administration.

“I will say that the IG, Inspector General Horowitz, he, other than his conclusion where he said no bias—but he meant that in a different way than you would think—he gave a great report last time,” Trump said. “I don't know him, he was appointed by Obama, that bothers me a little bit, but everything I can see he's really an honorable guy. And I think he knows how big this is. I think he knows how big this is. And if he's as honorable as he's supposed to be, the IG report coming out in three or four weeks, from what I hear, is going to be, and should be, and almost has to be a blockbuster because he has access to information that most people don't.”

Trump insisted his campaign was spied on (it was not):

"The attorney general said it better than anybody the other day when he was asked. 'Yes, I think they were spying on the Trump campaign.' You can't say it any better than that."

In a bizarre turn, Trump targeted Senator Mazie Horono (D-HI) over her support of the "New Green Deal," claiming Hirono backs a ban on airplanes (no such proposal exists) and that she wants to build a "train to Hawaii" (this is both untrue and impossible).

Mueller in his report recommended that Congress probe deeper into multiple instances of obstruction of justice by Trump, whose attempts to have Mueller fired were blocked by aides refusing to carry out illegal orders - in other words, the report was a rubric for impeachment.

Trump is sounding increasingly authoritarian of late and people's concerns are growing.

@atrupar This is both bonkers and terrifying #DerangedDonald #ImpeachDonaldTrump
— Jenny Sampson (@Jenny Sampson) 1556242848.0

This is not the behavior of a man who was "exonerated," despite what Trump has insisted (the Mueller report specifically said Trump was *not* exonerated).

Trump's obsession with Clinton and political retribution is a masterclass in projection.

The coup - according to Mueller - was the Russian plot to get Trump elected and the willingness of his campaign to accept the help.

And on that front, little has changed since 2016. Our election systems have not been safeguarded, and American intelligence agencies have been sounding the alarms that future election tampering is a certainty.

Pairing this with Trump's constant attacks on the rule of law means that next year's election, as Rupar fears, could be an unprecedented mess.