ABC News Just Compiled All the Times Donald Trump Was Cited by Perpetrators of Violence, Threats or Assault 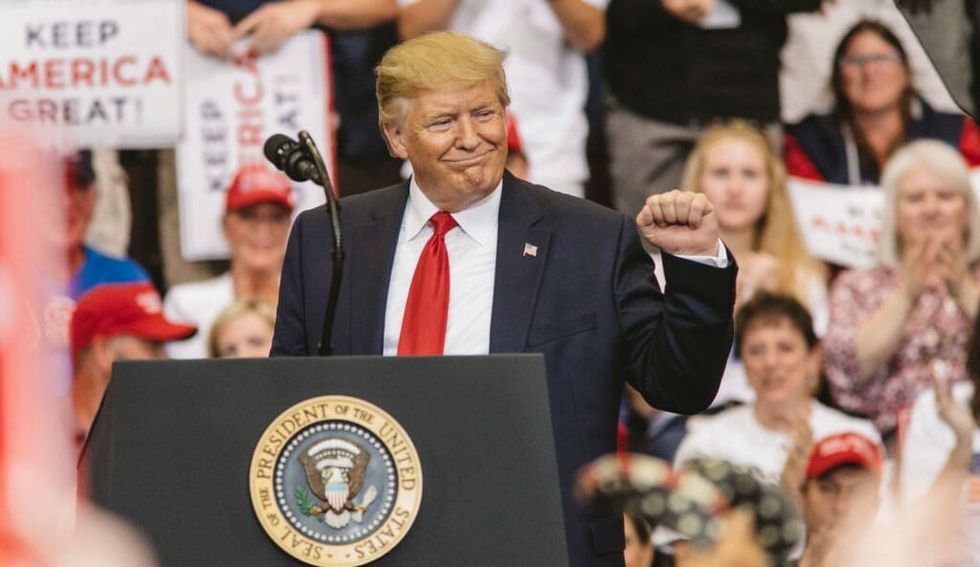 Pundits, political rivals and allies have warned of the dangers of the rhetoric and targeted attacks of President Donald Trump on Twitter and during his MAGA rallies. Yet Trump continues to refuse to accept any responsibility for bomb threats, violence and acts of domestic terrorism that mimic the President's own rhetoric from MAGA rallies and his Twitter feed.

But have any violent perpetrators specifically mentioned Trump as inspiration beyond mimicking his White nationalism, racist or xenophobic rhetoric? Is Trump inciting violence?

The President remarked after the act of domestic terrorism in El Paso:

"I think my rhetoric brings people together."

I asked Trump whether he thinks his rhetoric contributes at all to violence. “No, I don’t think my rhetoric has at… https://t.co/aSaPLU5JXq
— Jill Colvin (@Jill Colvin) 1565185914.0

But what kind of people and what are they rallying behind?

According to their research, in 36 criminal cases "Trump was invoked in direct connection with violent acts, threats of violence or allegations of assault."

In compiling criminal cases that invoked Trump, ABC News excluded vandalism and violent assaults on anti-Trump protestors at MAGA rallies. They also excluded cases where speculation made a connection to Trump ideology or the individual identified as pro-Trump, but court documents did not specifically name the President.

Researchers were unable to find a single criminal case linked to the 43rd or 44th Presidents, George W. Bush or Barack Obama. Trump related cases were identified by official court documents and law enforcement statements made under the penalty of perjury or contempt.

Court documents show the perpetrators and suspects identified in the 36 cases are mostly White men—teenagers to 75 years  old. Victims largely are from minority groups—African-Americans, Latinos, Muslims and gay men.

The actual number of violent acts or threats is likely far greater as in many cases, charges are ultimately not filed, perpetrators are not investigated or the assault or threat is never reported.

Federal law enforcement officials echoed the concerns of many. Trump's MAGA rallies, delivery style, White nationalist rhetoric and constant attacks against political opponents, the media or anyone who fails to praise him could easily incite violence.

Included is the so-called MAGA bomber who attended Trump MAGA rallies and targeted individuals and organizations the President himself targeted during speeches, interviews and on Twitter.

Another more recent case is not included of a 29 year-old man justifying fracturing the skull of a 13 year-old boy under orders from the President according to witnesses and his defense attorney. The boy "disrespected" the national anthem by wearing a hat—according to his attacker—and deserved to be picked  up and slammed into the ground.

This 37th case's court documents were filed after ABC News completed their research.

Prior to leaving for El Paso and Dayton, President Trump rejected the premise that his rhetoric has divided the cou… https://t.co/wT8deK92K2
— FactCheck.org (@FactCheck.org) 1565360105.0

Trump supporters are quick to point out the latest White nationalist domestic terrorist stated in his online manifesto that he held his views—which mirrored the President's—long before Trump. However the xenophobic mass murderer's math doesn't work.

If his manifesto—naming President Trump yet claiming Trump bears no responsibility for ideas and rhetoric he spread online—were to be believed, long before Trump would make the domestic terrorist 8-10 years old when he fully formed the identical talking points of President Trump and his administration.

@realDonaldTrump (2,2) You regularly use horrible language to incite hate and violence. You incite the kind of vio… https://t.co/DbeVgeU9pn
— Fred Guttenberg (@Fred Guttenberg) 1565713706.0

Whether the President tones down his Twitter attacks or his rhetoric at MAGA rallies remains to be seen.

If you think hate has no place in the USA, make your views known with this shirt  available here.