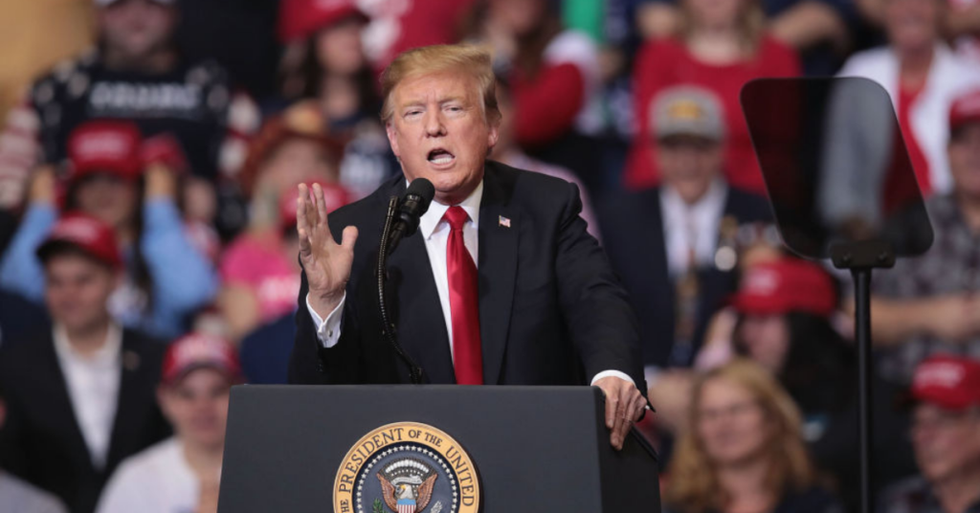 Dave Wasserman, the U.S. House Editor of the nonpartisan Cook Political Report, shared new Census numbers breaking down the voter turnout for the 2018 midterm elections and demonstrated exactly how Democrats were able to retake the House.

Comparing pre-election polling numbers with the new turnout data, Wasserman concluded that this is the "story of the midterms":

There is a catch, though, as Wasserman notes:

"The return of non-college voters to the electorate in '20 - specifically white men - is Trump's only path to a second term."

Observers suggested that the shift in the electorate would not bode well for Trump or the GOP.

@Redistrict The GOP better worry that they aren't, at Trump's lead, causing a realignment within the electorate the… https://t.co/NgkWFJim56
— EMU_Steve (@EMU_Steve) 1556120665.0

@Redistrict The electorate in midterms has always been more educated than presidential years. Those numbers should… https://t.co/JbiEXLQD1k
— Andrew JL (@Andrew JL) 1556120182.0

In January, an NPR/PBS NewsHour/Marist poll found that not only had the president's approval rating slipped but that he appeared to be losing the support of key members of his base.

The most surprising finding in the poll is that Trump's decline in approval came at the expense of traditionally supportive groups including Republicans, evangelicals, suburban men, and white men and women without college degrees. All of these groups were key to his victory during the 2016 presidential election: Losing them could spell trouble for the president’s chances at re-election in 2020.

Earlier this week, the latest Politico/Morning Consult and Reuters/Ipsos polls showed that the president's approval rating has taken a significant hit since the release of the Mueller report, a sign that Americans are not convinced by Trump’s insistence that the report exonerates him.

The Politico/Morning Consult poll found that Trump’s approval rating has dropped 5 points since the Mueller report was released last week, with only 39 percent of voters surveyed saying they approve of the job Trump is doing as president. As Politico observed:

“That is down from 44 percent last week and ties Trump’s lowest-ever approval rating in POLITICO/Morning Consult polling — a 39 percent rating in mid-August 2017, in the wake of violence in Charlottesville, Va.”

The poll found that 57 percent of voters surveyed disapprove of the president’s performance. Despite this, there isn’t too much support for impeachment. “Only 34 percent of voters believe Congress should begin impeachment proceedings to remove the president from office, down from 39 percent in January,” Politico wrote, noting that 48 percent believe Congress should not begin impeachment proceedings.

The Reuters/Ipsos poll found that Trump’s approval rating dipped to 37 percent, down three percentage points from a similar poll conducted just days earlier. Reuters says that’s “the lowest level of the year following the release of a special counsel report detailing Russian interference in the last U.S. presidential election.” The outlet also noted that’s lower than the 43 percent in a poll conducted shortly after Attorney General William Barr released his summary of the Mueller report’s contents.

The poll also found that 50 percent of Americans agreed that “Trump or someone from his campaign worked with Russia to influence the 2016 election,” and 58 percent agreed that the president “tried to stop investigations into Russian influence on his administration.” 40 percent of those surveyed believe Congress should begin impeachment proceedings compared to 42 percent who believe Congress should not.

Although Democrats are still divided on the matter of impeachment (with some expressing worry that moving ahead with impeachment proceedings could imperil their chances in 2020), pollster Mallory Newall, the research director at Ipsos Public Affairs, says the president's base appears to be "softening in the president's standing."

"[It's] not necessarily that those who support him have moved away from him," she observed, "it's just that they're a little more unsure than they were before."