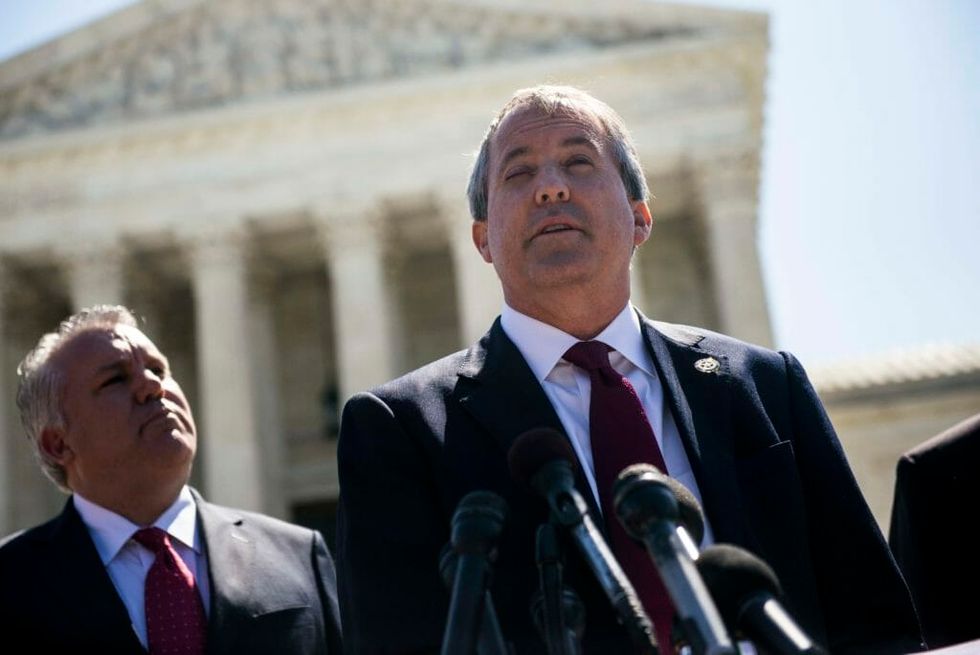 WASHINGTON, DC - JUNE 9: Texas Attorney General Ken Paxton speaks to reporters at a news conference outside the Supreme Court on Capitol Hill on June 9, 2016 in Washington, D.C. Paxton announced a lawsuit against the state of Delaware over unclaimed checks. (Photo by Gabriella Demczuk/Getty Images)

The Tax Cuts and Jobs Act of 2017, President Donald Trump's recent tax reform law, contains a provision eliminating the individual mandate in 2019, a cornerstone of the Patient Protection and Affordable Care Act.

Now, twenty states, including Texas, Wisconsin, Florida, Indiana, and West Virginia, filed lawsuits on Monday claiming that ending the individual mandate means Obamacare is unconstitutional, and thus the law should be done away with. "Following the enactment of the Tax Cuts and Jobs Act of 2017, the country is left with an individual mandate to buy health insurance that lacks any constitutional basis," the lawsuit states.

Texas Attorney General Ken Paxton is leading the charge against Obamacare and released a statement following the lawsuit's filing.

"Texans have known all along that Obamacare is unlawful, and a divided Supreme Court’s approval rested solely on the flimsy support of Congress’s authority to tax. Congress has now kicked that flimsy support from beneath the law," Paxton said in his statement. "The U.S. Supreme Court already admitted that an individual mandate without a tax penalty is unconstitutional. With no remaining legitimate basis for the law, it is time that Americans are finally free from the stranglehold of Obamacare, once and for all."

In the last year, this admin has continually attacked #Obamacare with their #ACAsabotage: -halving open enrollment… https://t.co/ingZms6qoD
— Obamacare (@Obamacare) 1519683225.0

The individual mandate requires people who choose not to purchase health insurance to pay a tax penalty.

The Supreme Court ruled in its 2012 National Federation of Independent Business v. Sebelius decision that Obamacare was constitutional because it falls under Congress's power to tax.

Scrapping the ACA has been the goal of Republicans since its passage in 2010 and was one of then-candidate Donald Trump's primary campaign promises in 2016. He has yet to put forth an alternative.

Despite what you hear in the press, healthcare is coming along great. We are talking to many groups and it will end in a beautiful picture!
— Donald J. Trump (@Donald J. Trump) 1489078877.0

Up to 20 million Americans have obtained health insurance under the Affordable Care Act. Of those 20 million, 14.5 million have gained coverage thanks to state expansions of Medicare, Medicaid, and other government subsidy programs. Because of Trump's tax law, however, 5 million people could lose their coverage in 2019.

And that's just the beginning. Should Obamacare be eliminated entirely, health premiums will skyrocket and estimated 32 million people could be left without essential health services.

Under the ACA, people with pre-existing conditions cannot be denied coverage, preventative health services such as checkups are covered, and there are no lifetime caps on costs of care. Obamacare also expands mental health services, which is a factor in our country's ongoing debate over gun control.

@thehill When mass shootings occur in our country, the Republicans who want to talk about mental health issues inst… https://t.co/0K0aafG3W9
— United We Sing (@United We Sing) 1518746425.0