The New York Attorney General and state legislators are moving forward with efforts that will allow criminal charges to be brought against individuals who receive presidential pardons. 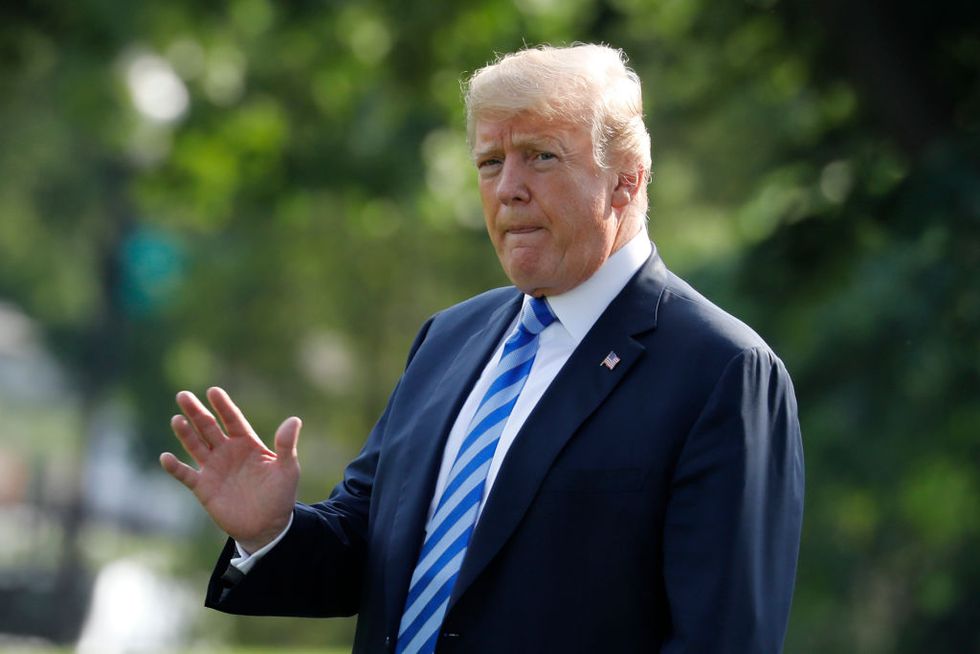 WASHINGTON, DC - MAY 14: U.S. President Donald Trump walks on the South Lawn of the White House before his departure to Walter Reed Medical Center on May 14, 2018 in Washington, DC. Trump is visiting first lady Melania Trump who is being treated for a kidney condition at the hospital. (Photo by Yuri Gripas-Pool/Getty Images)

At that time, Attorney General Eric Schneiderman urged the governor and state legislative leaders to eliminate a standing loophole that exists in New York double jeopardy law. As it currently stands, the law shields individuals who have received presidential pardons from state prosecution. However, on May 7th, Schneidermann resigned as Attorney General, in response to four women accusing him of abuse.

In the wake of Robert Mueller's continued investigation of Trump, this law would make it extremely difficult for Trump aides—and other individuals implicated with Trump—to escape criminal prosecution. This change would still allow those individuals the possibility of prosecution, even if the investigation of Russian interference in the 2016 presidential election produced no tangible results.

Although the president has no power to pardon perpetrators of state crimes, the current law means that individuals pardoned for federal crimes can be freed from culpability and “all accountability” under state laws.

Governor Cuomo reviewed Schneiderman’s proposal, while the state legislature introduced a bill that would enact the very change that Schneiderman proposed.

According to Cuomo’s Press Secretary, Cuomo “believes that the federal legal system should not provide a basis for any wrong doers to escape justice.”

“By closing New York’s double jeopardy loophole, lawmakers can ensure that no one accused of breaking New York’s laws will escape accountability merely because of a strategically-timed presidential pardon,” Schneiderman said in a statement. Changing the law would “substantially reduce the threat of lawless White House action.”

“We are disturbed by reports that the president is considering pardons of individuals who may have committed serious federal financial, tax, and other crimes — acts that may also violate New York law. We must ensure that if the president, or any president, issues such pardons, we can use the full force of New York’s laws to bring such individuals to justice,” Schneiderman said.

Schneiderman and Trump have a contentious history. The Attorney General led a three-year investigation against Trump University, which resulted in a $25 million judgment against the school. Trump had repeatedly attacked Schneiderman, calling him a “lightweight and total loser” on one occasion.

Legal experts believe that changing this law is of paramount importance. According to Jed Shugerman, a Fordham University law professor, the proposal would provide balance and gravitas. Changing the law would prevent harassment from prosecutors, while still “protects against pardons being used to obstruct justice.” Should this change be adopted, it would align New York with legal precedent already established in other states. Currently, 20 other states only provide the minimum legal protection required against double jeopardy.

Now that Schneidermann has resigned, the future of his actions to counter Trump has been brought into question. Currently, it is likely that the proposed legislation will continue to move forward in the short term. Beyond that is anyone's guess.

Barbara Underwood, New York’s Solicitor General, will immediately replace Schneidermann until the November midterm elections. Underwood is a Democrat and it is unlikely she will halt the actions that Schneidermann has already put into motion against Trump.

While it is unlikely that Underwood will reverse course, the ability of the legislation to quell Trump’s pardon abilities is decidedly less certain. In the past, Trump has promoted his presumed ability to pardon without restriction.

“While all agree the U.S. President has the complete power to pardon,” he tweeted last year. “Why think of that when only crime so far is LEAKS against us.”

Trump even reportedly asked his aides if he could pardon himself.

At this time, the Trump has made no comment on Schneiderman’s actions or the proposed legislation. However, this hasn’t stopped members of Trump’s administration from responding to the scandal.

Allegations are harrowing. Violence against women. Drunk with power. It’s so tough to read you must. https://t.co/Tvm0GdFo9Z
— Kellyanne Conway (@Kellyanne Conway) 1525736724.0

Summary: The New York Attorney General and state legislators are moving forward with efforts that will allow criminal changes to be brought against individuals who receive presidential pardons.