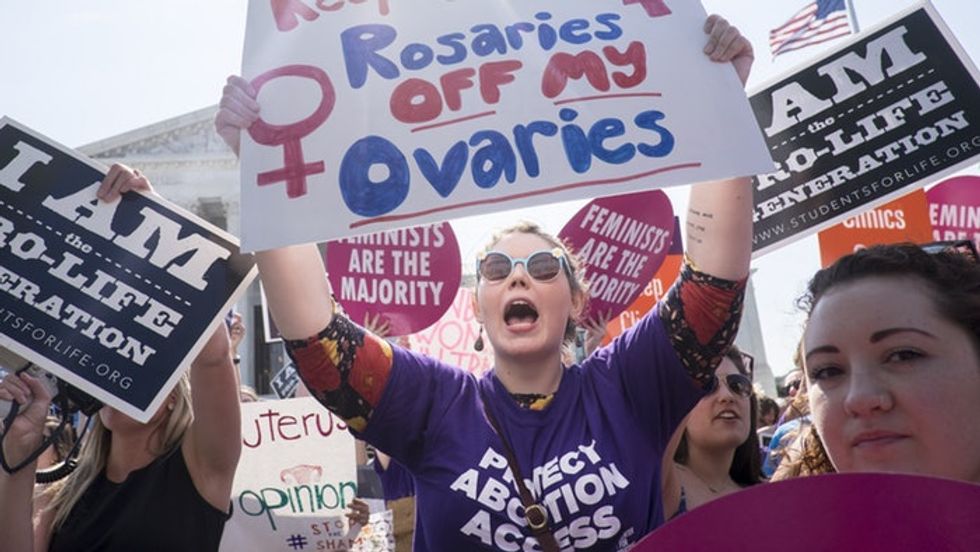 Last week, Texas’s Republican-controlled House voted 95-51 in favor of restricting abortion coverage in health insurance. Under the bill, known as House Bill 214, certain health insurance plans (including Texas’s Affordable Care Act, public employee health plans, and others) would be prohibited from covering abortions. Instead, women wanting abortions covered in their insurance plans would have to purchase private supplemental insurance—even in the cases of women who are victims of rape or incest.

“Women and parents will be faced with the horrific decision of having to purchase ‘rape insurance’ to cover them if they are victimized,” said Democratic Representative Chris Turner. “This is not only ridiculous, but it is cruel.”

Turner tried to offer an amendment to the bill to allow insurance companies to cover instances of rape or incest, but it was unsuccessful. Republicans also voted down proposed democratic amendments that would allow exceptions for severe fetal abnormalities, ectopic pregnancies and the mental health of the mother.

Some proponents of the bill tied the underlying motive to arguments of economic freedom. Republican Representative John Smithee, the bill’s sponsor, called it a “question of economic freedom and freedom in general.” He continued: “This isn’t about who can get an abortion. It is about who is forced to pay for abortion.”

Smithee believes it should be the woman—or rape victim as the case may be—who should be forced to pay for it. He estimated it would cost women who elected for coverage between $12 and $80 a year.

In Texas, as in the rest of the country, women make less money on the dollar compared to men. Texan women make an estimated 21-25 percent less than men. In the United States as a whole, when a woman has a child, her weekly earnings drop an average of three percent compared to her childless counterpart. (Men’s, in contrast, jump 15 percent.) Texas also has no state-level family leave laws, with no paid leave laws on the state or federal level. Meanwhile, annual infant care costs in the state run over $8,700 on average. So Smithee’s argument that women should be the ones to bear the cost is certainly in line with precedent.

Democratic representative Ina Minjarez, however, thought women should not be forced to pay a premium for health insurance that would protect their mental and physical health. “In Texas, women earn less, are paid unequally and lack child care or paid family leave laws. That’s why the economic impact of having the child is the No. 1 factor women consider when making this incredibly difficult and personal decision.”

The bill, if passed, would disproportionately affect low-income women, who may not be able to afford supplemental insurance or an unexpected abortion.

“If a woman of means needs a procedure, she is able to pay for it out of pocket. A woman who does not have resources is not able to do so,” said Yvonne Gutierrez, executive director of Planned Parenthood Texas Votes.

The bill will not become law unless it passes in the state senate. However, given that the Senate passed an identical bill in late July, it seems likely that it will. If it does, the Republican governor, Greg Abbott, would need to sign the bill to make it law.

“We fully expect this to get to the governor’s desk, and we’re delighted,” said Joe Pojman, executive director of Texas Alliance for Life.

If passed, the law will go into effect in December of this year, joining ten other states that require the purchase of supplemental insurance for abortion coverage.