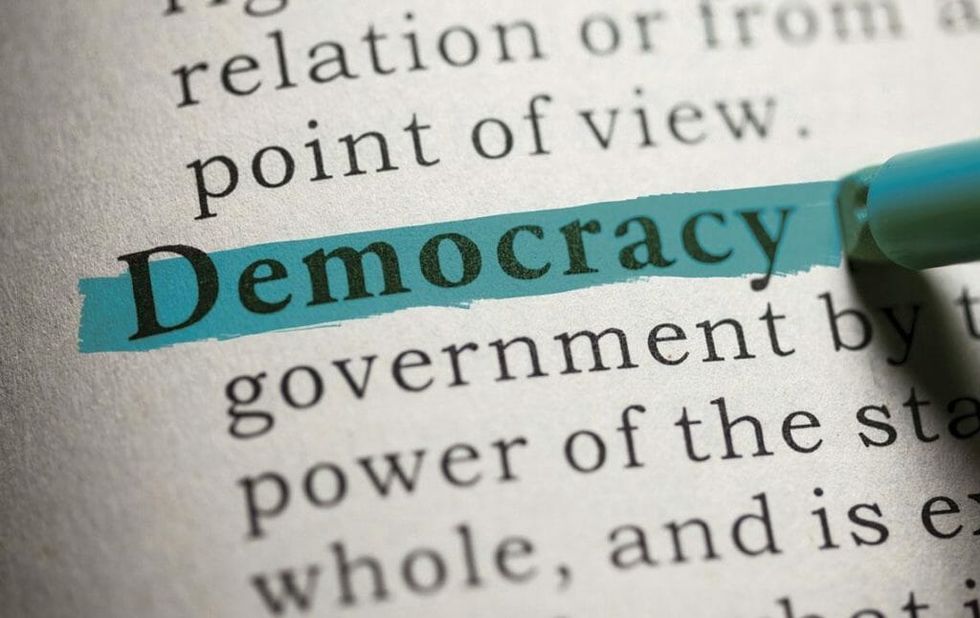 For ten consecutive years, analysts at the non-profit Freedom House have measured a decline in global freedom and democratic governance.

In 2015 China launched harsh campaigns against dissent, and renewed efforts to control political, social, and economic life; Russia enhanced its propaganda efforts in the Ukraine, and decreed that publishing military casualties is a crime against the state; Poland intensified a campaign against press freedoms; and Venezuela's government prosecuted leading opposition figures.

Even the United States, analysts say, is now slightly less democratic, thanks to the power the super-rich and special interest groups wield over the democratic process.

In 2002, the ostensible justification for invading Iraq wasn’t just to topple Saddam Hussein; it was to create a democratic government that would transform the region. Imagine, the argument went, a functioning Arab democracy in the heart of the Middle East. This could

trigger a domino effect for freedom, creating peace and prosperity in its wake.

Nobody’s talking like that now. The Arab Spring came and went and left dictators in charge. As we debate whether to send troops to topple ISIS, no one suggests that what the region needs is democracy. No presidential candidate has suggested that we should extend the vote to the disenfranchised in Iraq, at which point democracy will work its magic in bringing different groups together in the bonds of self-governance.

We no longer believe democracy can do that. The global champion of democracy is no longer interested in speaking up for it. America just wants to feel safe. And without a strong voice actively making the case that a democratic system of government is capable of living up to the challenges of the 21st century, democracy may gradually slip away.

By the 1990s, much of the Western world assumed that there were no alternatives to liberal democracy. Francis Fukiyama made this point explicit in his book, The End of History. Fukiyama argued that the great debates about how humanity should be politically organized were over, and that, over time, every nation would come to resemble America.

Twenty years later, that’s not working out. There are alternatives.

The most terrifying among them is probably the fanatical theology of ISIS—but it is an alternative. Acculturated and successful citizens in western countries around the world (including white Americans) have decided to leave the safety and comfort of liberal democracy for what they consider a superior society free of “secular perversions”—a

political system built on fundamentalist theology. It offers a level of certainty, moral clarity and a sense of meaning that western democracies don’t. It is an alternative that many people, over the last decade, have chosen over democracy, suggesting a massive failure on the part of western “liberators.”

Another alternative—more challenging because many find it more palatable—is the “Chinese Dream” that Chinese premier Xi Jinping has proposed as a contrast to the inspiring power of the American dream.

The Chinese Dream (or “China Dream,” as it is rendered in Chinese) has become the trademark slogan of Xi’s administration since he first publicly uttered the words in a November 2012 speech at the opening of an exhibition in Beijing called the “Road to Renewal,”the Atlantic notes.

“It’s not just a slogan, but a particular vision of utopia that could materialize in 34 years if the Chinese people are willing to stick with the Communist Party.” A vision of society that focuses on economic prosperity and personal security without individual rights and liberties, the Chinese Dream is a direct challenge to the idea that a democratic system is the only legitimate option for a modern nation.

Another option that’s playing surprisingly well in America right now is Vladimir Putin’s cult-of-personality style of leadership. One of the strangest phenomena reported in recent political media has been the conservative movement’s sudden approval and admiration for Vladimir Putin, a former KGB agent who has actively worked against the interests of democratic governance during and after the Cold War.

Vladimir Putin addresses a rally of supporters in Moscow in 2012. (CREDIT: Source)

Republican front-runner Donald Trump has praised Putin so enthusiastically that CNN has called their mutual admiration a “bromance.” Rudy Giuliani has said Putin is “what you call a

That Republican leaders would praise a foreign dictator whose major accomplishment has been to strangle his country’s democratic institutions is strange, but that it would be rewarded with front-runner status suggests that a substantial number of Americans not only aren’t offended by the tyrant, but actually like what they see. He may not respect the rule of law, but he looks strong.

U.S. government approval ratings are at historic lows. What’s more, the lack of faith in our traditional constitutional democracy is shared by both the left and the right.

The Republican electorate is especially hostile to people who have used the democratic system to get things done. Its leading candidates are a businessman, and a doctor with no record of public service (Trump and Carson, respectively), and a junior Senator with virtually no substantive legislation to his name (Cruz). Meanwhile, the GOP turns its nose up at candidates that—like them or hate them—have been widely seen as effective state leaders with long lists of signature initiatives.

It says something about our faith in democracy when the electorate prefers leaders who have kept their distance from actual governing. When experience in anything other than democratic government is being touted as both a virtue and a winning campaign strategy, it’s a clear signal that—to many people—democracy has failed. Similarly, it’s worth noting

that a cornerstone strategy of Republican politicians has been to reduce voter turnout in urban areas. Is it possible that citizens view democracy as an impediment to governing?

The American left’s presidential candidates are not similarly anti-democratic, but the major activist movements over the past several years have been very different from get-out-the-vote drives and traditional lobbying.

Occupy, the most extensive grassroots liberal movement of the past decade, was notable for its refusal to participate in the democratic process. Activists seized public land, made vague demands and insisted that they be addressed without any concern for political or legal processes.

In fact, they often saw themselves and their movement as a replacement for such processes, refusing to form coalitions or to endorse a slate of candidates at any level. The whole point of Occupy was that democratic approaches to solving social problems had failed, and mass action was needed.

A similar pattern has recently emerged. The student activist movements also reject the democratic process. Amherst students explicitly called for students who do not share their political perspective to be given corrective coursework; students at Yale have stated that those who do not share their perspective on safe spaces and racial justice have no legitimate claim to authority.

Black Lives Matter highlights the ways in which American democracy has failed to live up to its promises, and its sense of urgency comes from the belief that time will not cure

these ills. Black Lives Matter supports working within the political system as one among many tactics, but its existence is an implicit critique of American democracy. They tried the democratic process, it failed, and now they’re taking matters into their own hands.

America has had plenty of anti-democratic movements, beginning with slavery and continuing with the Ku Klux Klan, anti-labor coalitions and secret FBI programs to spy on and discredit dissidents. None of this is new.

In the past, however, these dalliances were met with a vigorous belief in democracy—the idea that the solution was to extend democracy to everyone, and these problems would be solved. Today, that vigorous belief has become a reflex, an empty habit. We use democratic institutions because they’re what we have, but nobody’s really enthusiastic. Nobody seems to believe anymore that if we get it right, we can solve entrenched social problems.

American conservatives look for strong paternalistic leaders who don’t follow rules; American liberals look to direct action movements that circumvent democratic institutions; and around the world, nations are asking whether the “Chinese Dream” is more appealing than America’s.

Democracy can’t advance when nobody really wants it. Unless someone is willing to defend it, we may slip out of the habit of democracy.