In late November a shocking video alerted the world to the slave trafficking crisis in Libya. Here’s a look at how things got to this point, and what’s being done to address the problem. 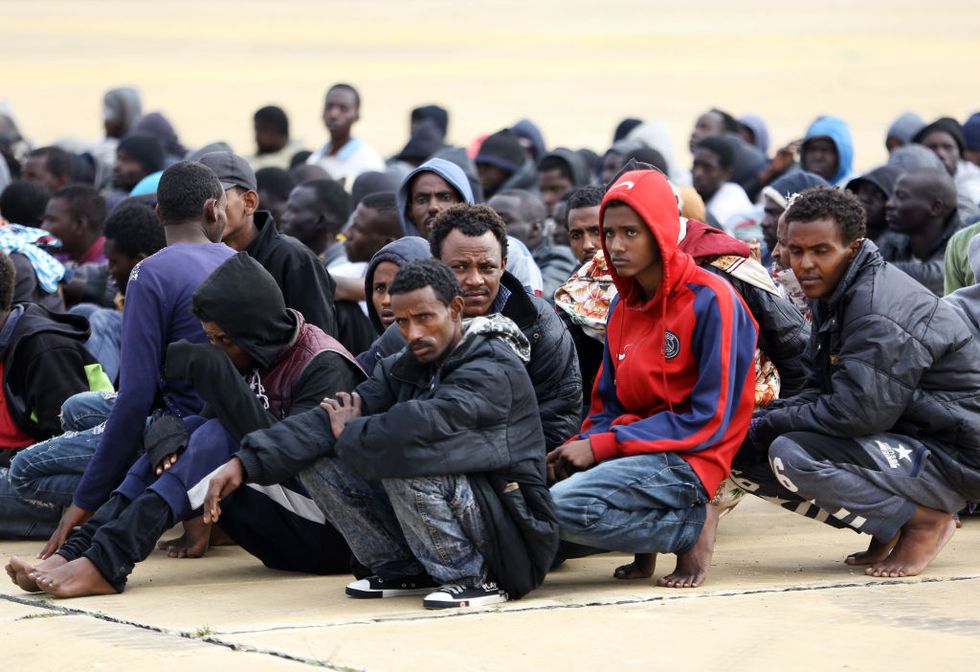 Illegal immigrants arrive at a naval base in Tripoli on December 16, 2017, after they were rescued off the coast of Garabulli, 60 kilometers (40 miles) east of the Libyan capital. / AFP PHOTO / Mahmud TURKIA (MAHMUD TURKIA/AFP/Getty Images)

The Middle East, Northern Africa, and Europe have been staggering under a refugee crisis for several years. Thousands of people have attempted to flee from politically unstable and war-ravaged regions to safer shores, and many take that journey through Libya, which borders the Mediterranean Sea. Though tens of thousands have made it to Italy and Greece, and some travel through Europe to find shelter in various countries, many do not survive the trek. According to the International Organization for Migration, a migration agency affiliated with the United Nations, more than 3,000 refugees have died during each of the past four years while attempting to sail to Europe from Libya.

This crisis has caused unrest, famine and family separation, but in late November a new horror was brought to the world’s attention when video surfaced of refugees in Libya apparently being sold into slavery. The video set off a renewed international uproar over the refugee crisis, but the complicated and dangerous political situation in the region may make it difficult for aid to reach those who need it most.

In the video, apparently filmed on a cell phone in the capital, Tripoli, a man is shown auctioning off two people, who are ultimately sold for 1,200 Libyan dinars, or about $800. CNN verified the video’s authenticity and sent journalists to Libya to investigate. Thanks to those journalists’ hidden cameras, the network was able to capture its own footage of people who had hoped to gain safe passage out of Africa being sold as “big strong” workers.

These human auctions are allegedly happening in at least nine locations around Tripoli and the surrounding area, and experts say they are the result of a general lawlessness that has gripped Libya since the ouster and killing of Muammar Gaddafi in 2011.

“There is no central government to speak of,” said Stephen Zunes, a professor of politics and international studies and coordinator of Middle Eastern Studies at the University of San Francisco. “There is no coast guard or border patrol to stop refugees coming from other countries to flee through Libya, or to prevent this kind of trafficking.”

How Did We Get Here?

To understand how things could get to this point, it helps to think about the region’s history.

For centuries, most of North Africa was under the control of the Ottoman Empire. Italian colonizers took over in the early 20th century, hoping to lay claim to a region they called Tripolitania. After Italy was defeated there during WWII, the Allies signed a 1947 peace treaty and decolonization began. In 1951, Libya became an independent kingdom under King Idris, and the discovery of oil reserves several years later helped bring a significant amount of wealth to the country. The wealth was mostly concentrated with Idris, however, and this led to unrest.

Muammar Gaddafi led a coup in 1969 and took the helm of the country himself. He was credited with modernizing the country significantly, but he was also known as a tyrant. In the West, he was best known for his support of terrorist organizations, and for the off-the-wall comments he often made, such as when he called Ronald Reagan “mad” and an “Israeli dog.” Still, Libyans were relatively quiet even throughout the Arab Spring, which began in late 2010 and saw uprisings in much of the Middle East.

“Unlike in Egypt and Tunisia, Libya had very little in the way of civil society or any kind of independent ways of organizing,” said Zunes.

This changed with the Libyan Civil War of 2011, during which the military saw major defections, ambassadors resigned, and in less than a week the people took up arms against Gaddafi’s government. As he responded with a fierce crackdown, the international community decided to intervene. The U.S. led in carrying out strikes in the country in order to help protect civilians, a decision that President Barack Obama defends, but wishes had been better planned. He’s not alone. Some experts have gone so far as to lay the blame for the current slavery crisis at Obama’s feet.

“When you break a state and then don’t stick around to rebuild it, you create a failed state,” Alan J. Kuperman, a professor at the University of Texas at Austin, has said.

Zunes, too, argues that the actions went beyond their mandate and violated UN security resolutions. In fact, many believed the intervention made things worse.

“It certain ways, it made it more difficult to act in those rare situations where foreign military intervention might be morally and legally justifiable to save civilian lives,” he said.

After the videos and further reporting became public in late November, the United Nations called an emergency session of its security council in New York. French UN Ambassador Francois Delattre led the call for new sanctions against Libya to address the issue. (The UN established some sanctions in 2011 because of human rights abuses, but they can be expanded.)

Donald Tusk, president of the European Council, responded to the reports of trafficking by arguing that Europe and Africa share responsibility for the safety of refugees. “It is in all our interests to have orderly migration that is more controlled, more humane and sustainable,” he said in opening remarks at the summit. “The recent reports about the treatment of Africans—especially young people—by smugglers and traffickers are horrifying.”

In late November, Libya, the EU and African leaders agreed to move refugees and at-risk migrants out of Libya and back to the countries they fled, as well as to open a transit center to assist the most vulnerable as they wait to be resettled.

President Donald Trump does not appear to have spoken publicly about the issue, but his tweets about CNN have made an impact. After CNN published its report from Libya, media inside the country called it “fake news.”

The broadcaster Libya 218 referred to the tweet as a reason to question the veracity of CNN’s reporting, arguing that the network’s reports are simply political.

“Here the possibility arises that the channel has published the report of slavery in Libya to secure an as yet hidden political objective,” the broadcaster reportedly said.

The Libyan government has said that it would investigate reports of human trafficking, but some Libyan diplomats have jumped on the anti-CNN train and argued that the reporting is simply meant to disparage their country.

Meanwhile, the International Rescue Committee has people on the ground in Misrata and Sirte providing health care, and said it plans to expand to Tripoli. But, according to the IRC, “Unless Libya’s leaders reach a compromise and global leaders press for a political resolution to the conflict, the horrific trade in the lives of human beings will only continue, and the huge humanitarian need will only grow.”

The Council urged Libyan authorities and all UN Member States to comply with international human rights and refugee laws, and urged the transfer of any detainees in Libya to state authority. The Security Council also recommended new measures to counter slave trafficking, and urged coordination of efforts to “tackle the root causes of large movements of people.”

Toward the end of December the UK Parliament debated whether to take action, with some MPs accusing the British government of failing to effectively use its power to protect the migrants.

It may be some time before real action is taken, especially considering the turbulent political climate in other parts of the region.