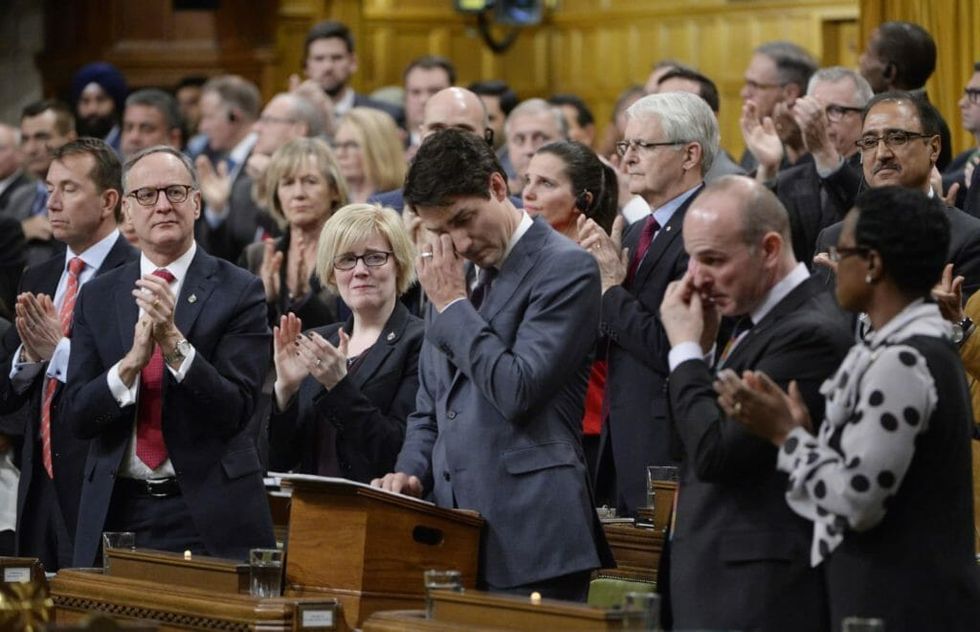 Canadian Prime Minister Justin Trudeau delivered an apology to the LGBT community on Tuesday, on behalf of the Canadian government, for decades of "state-sponsored, systematic oppression and rejection." Speaking in the House of Commons, he expressed shame, sorrow, and regret to to the military and civil servants, as well as those criminalized, who endured discrimination and injustice based on their sexual orientation.

"To all the LGBTQ2 people across this country who we have harmed in countless ways, we are sorry," Trudeau said. "You are professionals. You are patriots. And above all, you are innocent. And for all your suffering, you deserve justice, and you deserve peace. We betrayed you, and we are so sorry."

Earlier on Tuesday, the government introduced legislation which, if passed, will allow the expungement of criminal records belonging to people convicted of consensual sexual activity with same-sex partners. “This is the devastating story of people who were branded criminals by the government — people who lost their livelihoods, and in some cases, their lives,” Trudeau says in prepared remarks.

The apology comes with $145 million in compensation; $110 million is earmarked for LGBT civil servants and members of the military whose careers were sidelined or ended because of their sexuality. The money is part of a class-action settlement with employees who were investigated, sanctioned and sometimes fired as part of the “gay purge.”

An additional $15 million will go toward historical reconciliation, education and memorialization efforts. Plans include community projects to combat homophobia and provide support for people in crisis, and a commemoration in 2019 to mark the 50th anniversary of the federal decriminalization of homosexual acts.

The discriminatory policies that ruined careers and lives had their roots in federal efforts that began as early as the 1940s to delve into the personal lives of people who were seen as vulnerable to blackmail by the Soviet Union, simply because their hidden sexual orientation was considered a character weakness. Trudeau described these discriminations as "nothing short of a witch hunt."

A special unit of the Mounties underwent a broad campaign to remove gay and lesbian members from the military and other government institutions. To identify their targets, the authorities conducted surveillance, made threats, and even developed a “fruit machine” they believed could detect homosexuality. Many women were raped as a twisted form of treatment, and some victims of the purge committed suicide after losing everything. Although Canada partially decriminalized homosexual acts in 1969, the program continued until 1992.

"From the 1950s to the early 1990s, the government of Canada exercised its authority in a cruel and unjust manner, undertaking a campaign of oppression against members, and suspected members, of the LGBT communities," said Trudeau.

"Those who admitted they were gay were fired, discharged, or intimidated into resignation. They lost dignity, lost careers, and had their dreams and indeed, their lives, shattered."

This is the third apology for Trudeau as prime minister, following his apology in May 2016 for the Komagata Maru and last Friday for the treatment of Indigenous children and their "profound cultural loss" in residential schools in Newfoundland and Labrador. An fourth apology, this one for turning away Jewish refugees during the Second World War, is expected soon. Trudeau hopes these apologies will be a turning point that will allow Canada as a whole to move forward into their future.

“It is my hope that in talking about these injustices, vowing to never repeat them, and acting to right these wrongs, we can begin to heal," said Trudeau.

READ: "We betrayed you. And we are so sorry" - Trudeau’s apology to members of LGBTQ community.