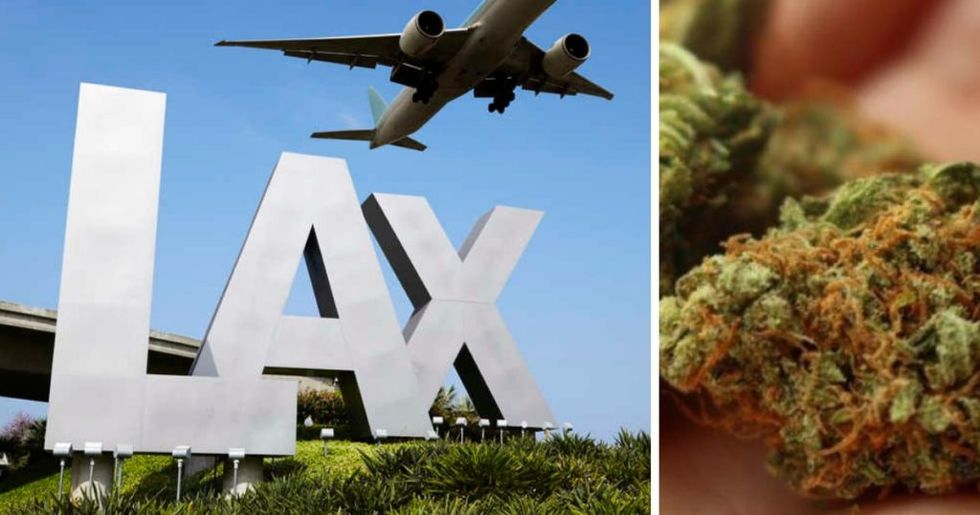 In 2016, the state of California passed Proposition 64, commonly referred to as the Adult Use of Marijuana Act. The law went into effect two years later, on January 1, 2018. The proposition stated that it is now legal in California "for individuals 21 years of age or older to possess up to 28.5 grams of marijuana and 8 grams of concentrated marijuana for personal consumption."

In a new advancement, LAX is now honoring the same regulations established by the new law. Travelers in the airport over the age of 21 will be allowed to pass through the airport with permissible amounts of marijuana.

"The Los Angeles Airport Police Department will allow passengers to travel through LAX with up to 28.5 grams of marijuana and 8 grams of concentrated marijuana," reads a statement on LAX's official website, posted in September 2018.

The full statement reads as follows:

“As of January 1, 2018, California law allows for individuals 21 years of age or older to possess up to 28.5 grams of marijuana and 8 grams of concentrated marijuana for personal consumption. With the change in state law, the policy and procedures of the Los Angeles Airport Police Division (APD) regarding marijuana were updated to reflect this change. APD officers, who are California Peace Officers, have no jurisdiction to arrest individuals if they are complying with state law. However, airport guests should be aware that Transportation Security Administration (TSA) screening stations are under federal jurisdiction. Also, passengers should be aware that marijuana laws vary state by state and they are encouraged to check the laws of the states in which they plan to travel.”

“Based on our policy, we’re not going to arrest you or confiscate marijuana,” said Los Angeles Airport Police representative Alicia Hernandez.

Despite the change in policy, it is important to note that you can still get arrested for marijuana possession if you are traveling to a state where it is still illegal. Individuals are still subject to local laws, even if they have a valid medical marijuana prescription.

Planes are subject to federal aviation and drug laws, meaning that an individual carrying marijuana on a plan can still face fines or penalties, even if the Los Angeles Police decline to press charges.

Basically, this is not an unrestricted policy. The aforementioned federal laws are something of a catch-22. Once a travel makes it through a TSA checkpoint, they are the subject to those rules and restrictions. Technically, an individual can be federally prosecuted for possession or transportation of illegal substances across state lines. Despite this, it doesn’t necessarily mean that your weed will get confiscated, however, since the TSA is focused on more imminent threats, such as terrorism. However, it can cause some delays in the travel process. Even if small, there is still a risk.

In essence, if you fly high, be smart, be safe and stay educated on laws that will still affect you.