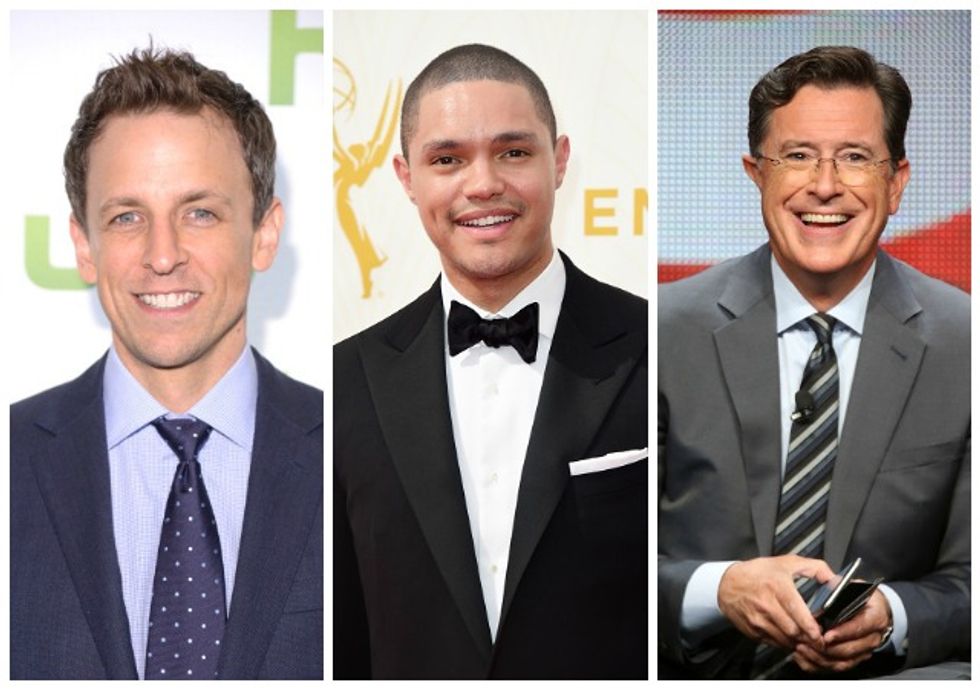 Late night talk show hosts Stephen Colbert, Seth Meyers and Trevor Noah all weighed in on the “Bernie or Bust” contingent, which staged a walkout during the Democratic National Convention in Philadelphia last night. Party unity was chief among their collective concerns, which they voiced on their respective programs following a historic evening culminating in Hillary Clinton becoming the first female nominee of a major U.S. political party.

Stephen Colbert’s surprise guest was Sen. Cory Booker, who appeared live via satellite after speaking at the DNC the night before. Colbert asked Booker if he believes that Sanders supporters are “being ridiculous,” a reference to a similar comment comedienne Sarah Silverman, a former Sanders supporter, ad-libbed on Monday criticizing those who’ve voiced their displeasure for the Democratic Party’s nominee. Booker’s response was measured, even judicious. “No, I absolutely don’t,” he said. “What’s ridiculous is that the Republicans had a convention and their folks just boycotted it. Past presidents didn’t show up. Twenty-two of my Republican Senate colleagues just boycotted it.”

On the matter of party unity, Booker was firm. “We in the Democratic Party said everybody come under this tent. When we come under this tent, there may be a lot of friction, a lot of saltiness, but at least we come under the tent,” he said. He also expressed admiration for Sanders, who audience members greeted with thunderous applause when he took the stage to deliver his speech. “It just shows that we recognize this man, Bernie Sanders, changed the national conversation,” Booker said. “He changed the Democratic Party platform and because of his fierce competition he made Hillary Clinton more ready to lead this nation.”

By contrast, Seth Meyers’ response was decidedly less diplomatic. “We don’t have time for this,” he said of “Bernie or Bust” in a clip he posted to his Twitter account ahead of his 12:35 AM airtime. “I tuned in last night and there was more white booing than the Casper movie. Look, I know you’re ‘Bernie or Bust’ but the results are in and ‘Bust’ won.” Meyers’s response to some recent general election polls which place Donald Trump ahead of Hillary Clinton was similarly pragmatic. “The house is on fire. Stop crying because we’re not putting it out with your hose.” Donald Trump, Meyers asserted, is a “racist demagogue” and history has shown that “never ends well.”

However, Meyers also found time to laud Sanders fans for their commitment, which produced the most progressive platform Democrats have seen in years. “Bernie did a great job. You did a great job,” Meyers said. “Your passion changed

the Democratic Party and that is no small thing. You should be proud of yourselves for his campaign. But also, you have to be quiet now!”

On The Daily Show, Trevor Noah said that Democrats tried to mitigate the damage from the recent DNC email hack by asking chairwoman Debbie Wasserman Schultz to “step the fuck out of here,” but noted that not even Sanders could calm his supporters, who booed him for endorsing Hillary Clinton. “You’ve got to love Bernie Sanders,” Noah said. “He spent the last year teaching people to dream the impossible dream — universal health care, trillions in infrastructure, free college, all paid for with historic tax hikes. And now in a room full of the people who love those ideas he's coming out like a disillusioned Peter Pan.”

The Daily Show sent its correspondents to the DNC earlier that evening to ask the “Bernie or Bust” contingent if they agreed with their favored candidate that they should do everything they can to stop a possible Donald Trump presidency. Many of those interviewed asserted that their support did not include voting for Hillary Clinton. Noah urged Sanders supporters to reconsider the stakes. “You can't give the same boo to Hillary as you do to the discrimination of gay people, it’s not the same thing,” he said.

Sanders’ 2016 run “is over,” Noah concluded. “And it really was a bittersweet moment for everyone involved, especially for the liberal wing of the Democratic Party, some of whom were actually in tears as Bernie delivered his swan song. There were so many white women crying, I thought Pinterest had died.”

A new report published Monday indicates that “Bernie or Bust” is little more than a vocal minority. According to the Pew Research Center, which traced Democratic voters’ support for candidates from March 2015 to June 2016, 90% of Democratic voters that have consistently backed Bernie Sanders have now thrown their support behind Hillary Clinton in the general election.