Kit Harington Just Used the Most Disturbing 'Game of Thrones' Metaphor to Describe Donald Trump's Presidency, and It's So True It Hurts 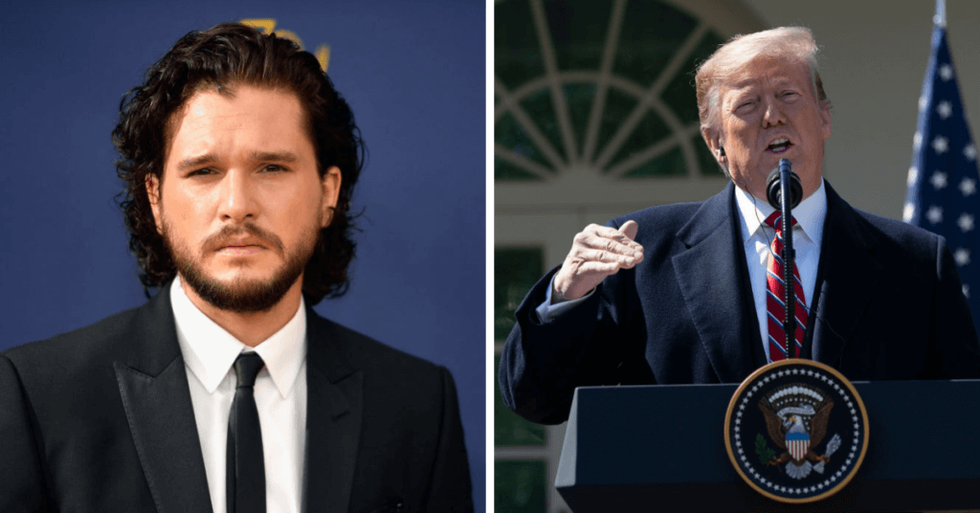 In an interview with Variety, actor Kit Harington, who plays Jon Snow on HBO's Game of Thrones, discussed how the show, whose final season premiere premieres April 14, and its storylines mirror real-world politics.

“I think it’s always been about two things for me,” said Harington. “About dysfunctional families — or families in general, always where the best drama is — and the everlasting idea that people who seek power are very often the last people who should have it. Unfortunately, we’re leaving ‘Thrones’ with a Joffrey as the President of the United States of America.”

The mad king Joffrey Baratheon, the sadistic son of the equally sadistic Cersei Lannister, is a thin-skinned and tempestuous narcissist who is killed in the show's fourth season.

“I’m deeply sad of the state of the world as ‘Thrones’ ends. Because if it was prophetic, you’d hope that people would have watched ‘Thrones’ and tried to avoid some of the situations these characters find themselves in, and I feel like we are living in a more ‘Thrones’-like world.

Political commentators, television critics, and social media users have drawn comparisons between President Donald Trump and Joffrey Baratheon for years though and Harington's observations serve as confirmation that we are living in very strange times indeed.

Watching Game Of Thrones reruns and have decided that Donald J Trump is King Joffrey if he’d grown up.
— pat schwenk (@pat schwenk) 1553051771.0

Harington has been rather vocal about his disdain for Trump over the last few years, and previously compared Trump to Joffrey in 2017.

Mr. Donald Trump — I wouldn’t call him president, I’ll call him Mister,” Harington toldEsquire at the time. "I think this man at the head of your country is a con artist. I believe in experts."

Game of Thrones writer George R.R. Martin has expressed similar sentiments, telling the same publication that Trump reminds him of one of the most reviled characters in Westeros.

“I think Joffrey is now the king in America,” Martin said then. "And he’s grown up just as petulant and irrational as he was when he was thirteen in the books."

The intersections between Trump and Game of Thrones came a little too close to home for HBO last year when the president tweeted a Game of Thrones-inspired meme of himself declaring new sanctions against Iran.

As Second Nexus noted at the time:

The image, emblazoned with “SANCTIONS ARE COMING NOVEMBER 5,” is a play on “Winter is Coming,” setting the stage for the final battle between the living and the dead in HBO’s hit series. Trump’s poster also copied Game of Thrones’ signature font style.

A few minutes later, the White House retweeted Trump’s message along with a dark announcement of its own:

“The United States has launched a campaign of economic pressure to deny the regime the funds it needs to advance its bloody agenda!”

The United States has launched a campaign of economic pressure to deny the regime the funds it needs to advance its… https://t.co/UKhn592Iei
— The White House (@The White House) 1541174669.0

“We were not aware of this messaging and would prefer our trademark not be misappropriated for political purposes," said the network in a statement to The Hollywood Reporter.

It doesn't appear Trump has ever watched Game of Thrones; he has never mentioned it. His predecessor, former President Barack Obama was a huge fan of the series and received screeners for season six in 2016. Obama has never come right out and said it, but we're certain the comparisons of Trump to Joffrey have crossed his mind, too.