Jimmy Kimmel Just Responded to Donald Trump's 'Lowest Rated Oscars' Tweet, and It Hits Him Where It Hurts the Most 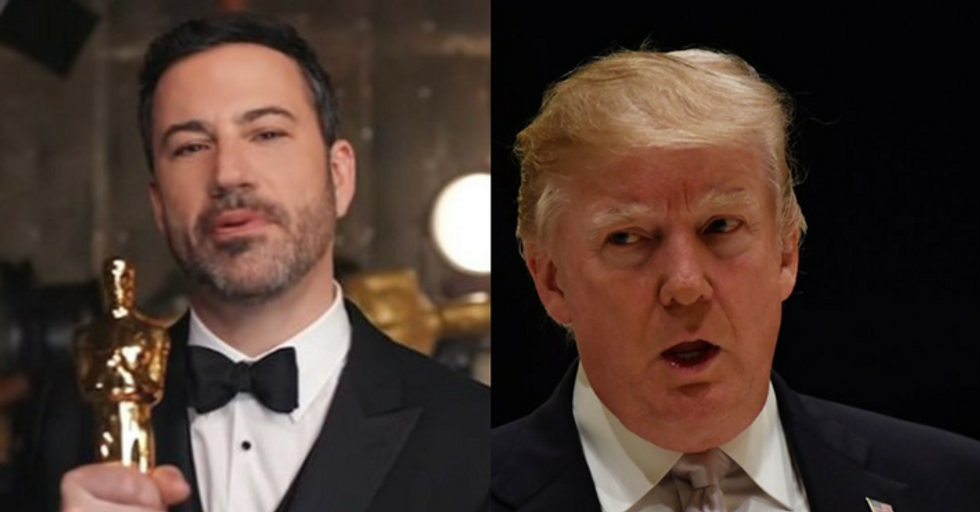 The 90th Academy Awards aired Sunday and recorded a 20 percent drop in viewership from 33 million to 26.5 million. While social trend analysts attribute the drop to the show's length, changes in American viewing habits, and smaller films garnering the majority of awards, President Donald Trump had his own theory.

The Oscars' host, late night comedian and talk-show host Jimmy Kimmel, thanked the president for his insight with a Tweet in response.

They both can back their claims with facts. Sunday night's telecast did have the lowest TV ratings in the modern era. But streaming services and DVR viewers are not included in the ratings totals.

And political polls, aside from ones from sources like the recent Conservative Political Action Conference (CPAC), all give President Donald Trump the lowest ratings of any president.

Trump's stab at the Oscars came as no surprise. The telecast took more than a few jabs at the president.

"Where there is light, there is always hope. Except at the White House. Hope quit on Wednesday," Kimmel said in reference to the resignation of White House Communications Director Hope Hicks.

Rapper Common included a message for the president in his Sunday night performance as well.

These days we dance between love and hate. ... A President that trolls with hate. He don't control our fate because God is great. When they go low we stay in our heights. I stand for peace, love and women's rights."

The Academy Awards remain the most-watched award show on TV, easily beating the Grammys and Golden Globes. But awards shows overall experienced drops in viewers. The Oscars saw a steady decline since 2014 when 44 million people tuned in.

As for the Twitter debate, there were plenty of voices on both sides.

@jimmykimmel Lowest rates oscars—you hosted!!! What happened to pure entertainment? You were kinda funny at one time!
— 🇺🇸AmericanGirl🇺🇸 (@🇺🇸AmericanGirl🇺🇸) 1520357174.0

@jimmykimmel The medium has changed, not the star power. Why doesn’t anyone point this out? TV just isn’t consumed… https://t.co/vyYdjStGc0
— Kyle Barton (@Kyle Barton) 1520358917.0