Kimmel did not mince words. 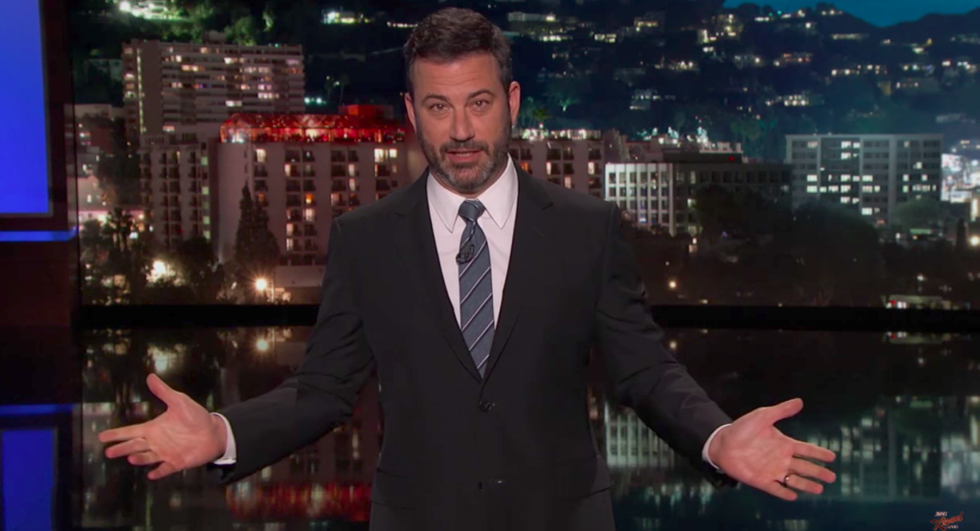 In the spring, Jimmy Kimmel made the case for the Affordable Care Act, detailing his son’s recent birth and heart surgery and urging Congress not to gut health care access. Kimmel's emotional monologue quickly went viral.

Now the late-night television host is in the spotlight again, this time weighing in on the Graham-Cassidy Obamacare replacement bill––named for Senators Lindsey Graham (R-SC) and Bill Cassidy (R-LA)––currently barreling through the Senate. The bill would strip the ACA's federal funding, and allow the states to run individual health care programs. It would also axe the "individual mandate" that requires people to buy insurance and roll back funding for Medicaid.

“I know you guys are going to find this hard to believe. But a few months ago, after my son had open heart surgery … a senator named Bill Cassidy from Louisiana, was on my show and he wasn’t very honest,” Kimmel said, referring to an appearance Cassidy made on his program, during which he stressed the importance of making health care affordable for the middle class.

Below is a transcript of most of Kimmel's remarks.

It seemed like [Cassidy] was being honest. He got a lot of credit and attention for coming off like a rare, reasonable voice in the Republican Party when it came to health care for coming up with something he called — and I didn’t name it this, he named it this — the Jimmy Kimmel test, which was in a nutshell: No family should be denied medical care, emergency of otherwise, because they can’t afford it. He agreed to that. He said he would only support a health-care bill that made sure a child like mine would get the health coverage he needs no matter how much money his parents make.

And that did not have annual or lifetime caps. These insurance companies, they want caps, to limit how much they can pay out. So for instance, if your son has to have three open heart surgeries, it can cost hundreds of thousands of dollars apiece. If he hits his lifetime cap of, let’s say, a million dollars, the rest of his life, he’s on his own.

Our current plan protects Americans from these caps and prevents insurance providers from jacking up the rates for people who have preexisting conditions of all types. And Sen. Cassidy said his plan would do that, too. He said all of this on television many times.

So last week, Bill Cassidy and Sen. Lindsey Graham proposed a new bill, the Graham-Cassidy bill. And this new bill actually does pass the Jimmy Kimmel test, but a different Jimmy Kimmel test. With this one, your child with a preexisting condition will get the care he needs — if, and only if, his father is Jimmy Kimmel. Otherwise, you might be screwed.

Now, I don’t know what happened to Bill Cassidy. But when he was on this publicity tour, he listed his demands for a health-care bill very clearly. These were his words. He said he wants coverage for all; no discrimination based on preexisting conditions; lower premiums for middle-class families; and no lifetime caps. And guess what? The new bill? Does none of those things.

Coverage for all? No. Fact, it will kick about 30 million Americans off insurance. Preexisting conditions? Nope. If the bill passes, individual states can let insurance companies charge you more if you have a preexisting condition. You’ll find that little loophole later in the document after it says they can’t. They can, and they will.

But will it lower premiums? Well, in fact, for lots of people, the bill will result in higher premiums. And as far as no lifetime caps go, the states can decide on that, too, which means there will be lifetime caps in many states. So not only did Bill Cassidy fail the Jimmy Kimmel test, he failed the Bill Cassidy test. He failed his own test. And you don’t see that happen very much.

This bill that he came up with is actually worse than the one that, thank God, Republicans like Susan Collins and Lisa Murkowski and John McCain torpedoed over the summer. And I hope they have the courage and good sense to do that again with this one, because these other guys who claim they want Americans to have better health care — even though eight years ago they didn’t want anyone to have health care at all — they’re trying to sneak this scam of a bill they cooked up in without an analysis from the bipartisan Congressional Budget Office.

They don’t even want you to see it. They’re having one hearing. I read the hearing’s being held in the Homeland Security Committee, which has nothing to do with health care. And the chairman agreed to allow two witnesses, Bill Cassidy and Lindsey Graham, to speak.

So, listen, health care is complicated. It’s boring. I don’t want to talk about it. The details are confusing, and that’s what these guys are relying on. They’re counting on you to be so overwhelmed with all the information you just trust them to take care of you, but they’re not taking care of you. They’re taking care of the people who give them money, like insurance companies. And we’re all just looking at our Instagram accounts and liking things while they’re voting on whether people can afford to keep their children alive or not.

Most of the congresspeople who vote on this bill probably won’t even read it. And they want us to do the same thing, they want us to treat it like an iTunes service agreement. And this guy, Bill Cassidy, just lied right to my face.

(Clip of Kimmel and Cassidy’s interview from May — Kimmel: “Do you believe every American regardless of income should be able to get regular checkups, maternity care, etc., all of those things, that people who have health care get and need?” Cassidy: “Yep.”)

So “yep” is Washington for “nope,” I guess. And I never imagined I would get involved in something like this, this is not my area of expertise. My area of expertise is eating pizza, and that’s really about it. But we can’t let them do this to our children, and our senior citizens, and our veterans, or to any of us.

And by the way, before you post a nasty Facebook message saying I’m politicizing my son’s health problems, I want you to know: I am politicizing my son’s health problems because I have to. My family has health insurance, we don’t have to worry about this. But other people do, so you can shove your disgusting comments where your doctor won’t be giving you a prostate exam once they take your health-care benefits away.

Kimmel also urged his viewers to call their elected representatives to stop the measure from advancing in the Senate.

Many praised his efforts; others confirmed that they had been able to speak with their elected officials.

@jimmykimmel @BillCassidy Thank you Jimmy! My niece has Cystic Fibrosis, she is also a constituent of the Senator,… https://t.co/AtbmnF2wWO
— Emily Egan (@Emily Egan) 1505874932.0

Cassidy addressed Kimmel's monologue during an appearance on CNN's New Day and took the opportunity to defend the legislation.

"I'm sorry he does not understand," he said. "States like Maine, Virginia, Florida, Missouri — there'll be billions more dollars to provide health insurance coverage for those in those states that have been passed by by ObamaCare," he said. "And we protect those with preexisting conditions."

Cassidy did not mention Kimmel in an official statement, and reiterated his commitment to the measure.

"We have a September 30th deadline on our promise," Cassidy said, referring to the plan to repeal the ACA. "Let's finish the job. We must because there is a mother and father whose child will have insurance because of Graham Cassidy Heller Johnson. There is someone whose pre-existing condition will be addressed because of GCHJ."