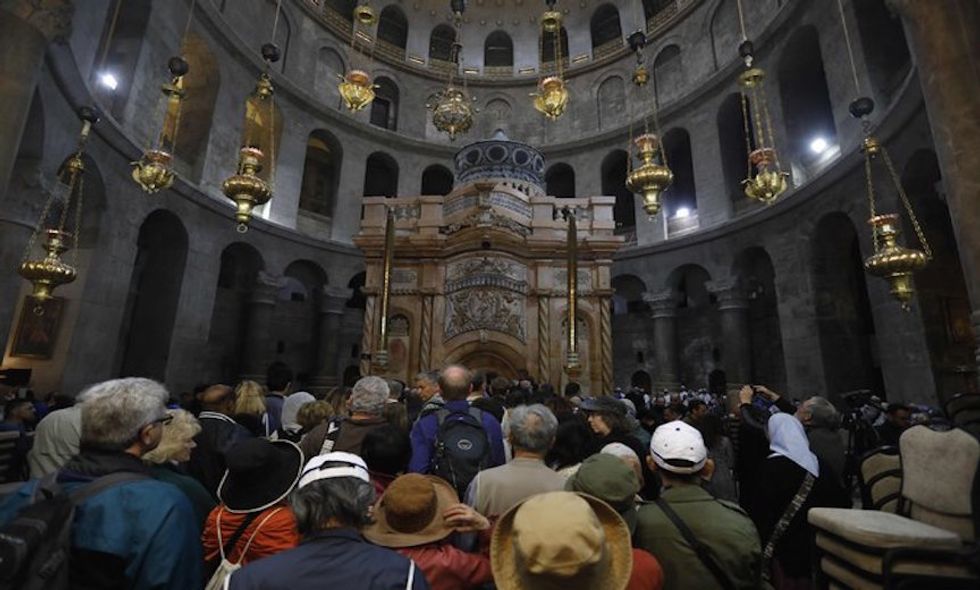 Renovations were completed late last month on Christianity’s holiest site: the tomb where Christians believe Jesus was buried and rose from the dead after his crucifixion.

The tomb lies within the Church of the Holy Sepulcher, a 12th-century structure built atop 4th century remains. A shrine, called the Holy Edicule, lies at the church’s center and is thought to encase the cave where Jesus was laid to rest.

The Edicule was built in 1810, and the structure was at risk of total collapse due to fire and water damage. It had been propped up with an unsightly iron cage for 70 years to try to prevent just that.

Yet repairs stagnated as feuding denominations who own the church—Greek Orthodox, Armenian Orthodox and Roman Catholic–were unable to agree on plans to fix it. Then last year, Israel’s Antiquities Authority declared the building to be unsafe, and briefly closed it. This declaration finally prompted the denominations to make the repairs. And last May, after approval from the pope and the head of the Eastern Orthodox Church, as well as $4 million in donations, restoration work began.

“I would venture to say that if this intervention hadn’t happened now, there was a very great risk that there could have been a collapse,” said Bonnie Burnham of the World Monuments Fund, a nonprofit that helped raise funds for the project.

The restoration effort was led by a Greek restoration team based in Athens. The team methodically removed parts of the Edicule and put them back together after installing titanium mesh and grout to strengthen the building’s core. Candle soot and pigeon droppings were scrubbed off the walls. Most dramatically, the iron cage was at last removed.

“The monument today is free,” said Antonia Moropoulou, who supervised the renovations. “It is emancipated from the iron grids.”

During restoration, the crew, along with priests, monks and scientists, also peeled back layers of marble to temporarily unveil the exact spot where many believe Jesus Christ was laid to rest.

“We had to be very careful, said Harris Mouzakis, an assistant professor of civil engineering at National Technical University who was working on the process. “It was not just a tomb we had to open. It was the tomb of Jesus Christ that is a symbol for all of Christianity—and not only for them but for other religions.”

After removing one layer or marble, they discovered another layer with a cross on it. Beneath that was a limestone slab built into the wall of the cave, which is believed to be where Jesus was placed after his death. The slab had not been seen since at least the 1500s.

“It was really important to see the bench, very flat and almost complete, from the right to the left, almost for the shape of one man [who] can stay on it,” said Eugenio Alliata, an Italian archaeologist who belongs to a group that looks after Christian sites in Jerusalem. “This was really something very important. And it was the first time it has been documented as it is.”

Although the group worked quickly to reseal the tomb, it did make one change to the inner sanctum. A window was installed, so that visitors can now see the original rock wall of Jesus’ tomb.