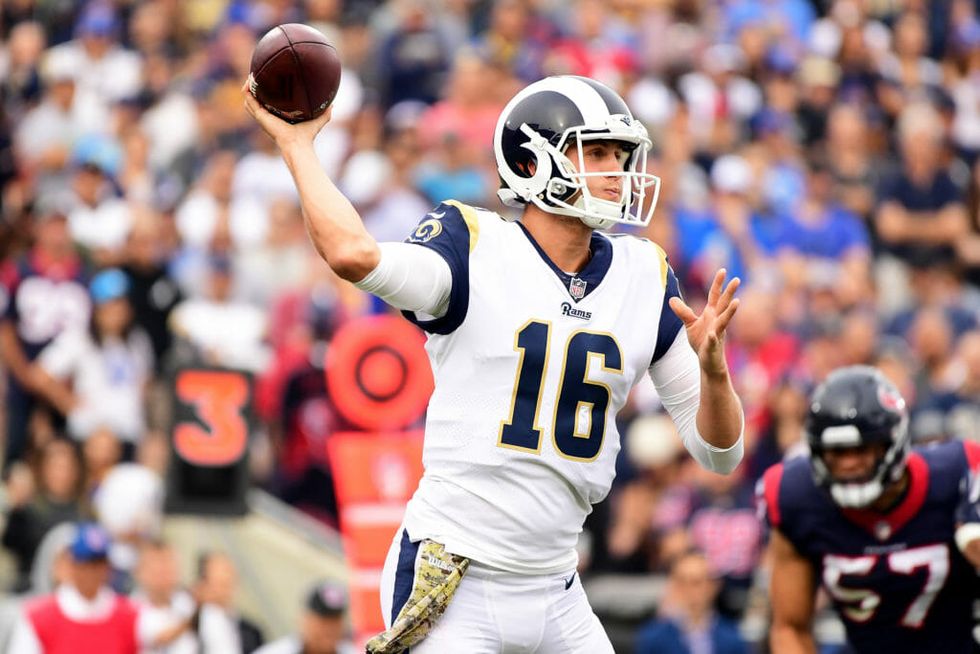 During Week 10 of the NFL season, sophomore Rams quarterback (and former number one overall pick) Jared Goff put up a second consecutive monster fantasy football performance. Goff's 311 passing yards and four touchdowns against the Giants in Week 9 netted him 28.4 fantasy points in standard leagues. In Week 10, he proved that was no fluke by throwing for 355 yards against Houston. He connected for another three scores, ending the day with 26.5 points. Two of the touchdowns came on passes to Robert Woods, who had the best game of his career.

Definitely. But it's tough to go all-in on Goff just yet. He took major advantage of two weak matchups; the Giants have allowed more fantasy points to opposing quarterbacks than any other team in football (20.8), while the Texans have allowed the third-most (20.1).

That's not to take away from Goff's performance. He did exactly what he was supposed to do: beat up on weak passing defenses. The problem is that his schedule gets a lot tougher from here on out. Below, we'll take a quick look at the opponents he'll face for the remainder of 2017. The number in parentheses is where that team rank on the list of toughest defenses against quarterbacks this season.

At first glance, it's not a terrible schedule. But your fantasy league most likely doesn't play into Week 17, if you have a half-decent commissioner. If that's the case, Goff will end up facing passing defenses in the top 50th percentile for four out of his remaining six weeks. Not to mention another defense that just barely misses the cut.

It's not grim by any means. Goff only faces one top-ten passing defense, so viewing it from that perspective makes the situation more palatable. Still, it's tough to trust a breakout when it comes against two of the three worst passing defenses. With matchups against the Vikings and Saints ahead in the next two weeks, now might be your best chance to sell high on Goff. If you can get anything resembling a top-20 wide receiver, I say make the trade.