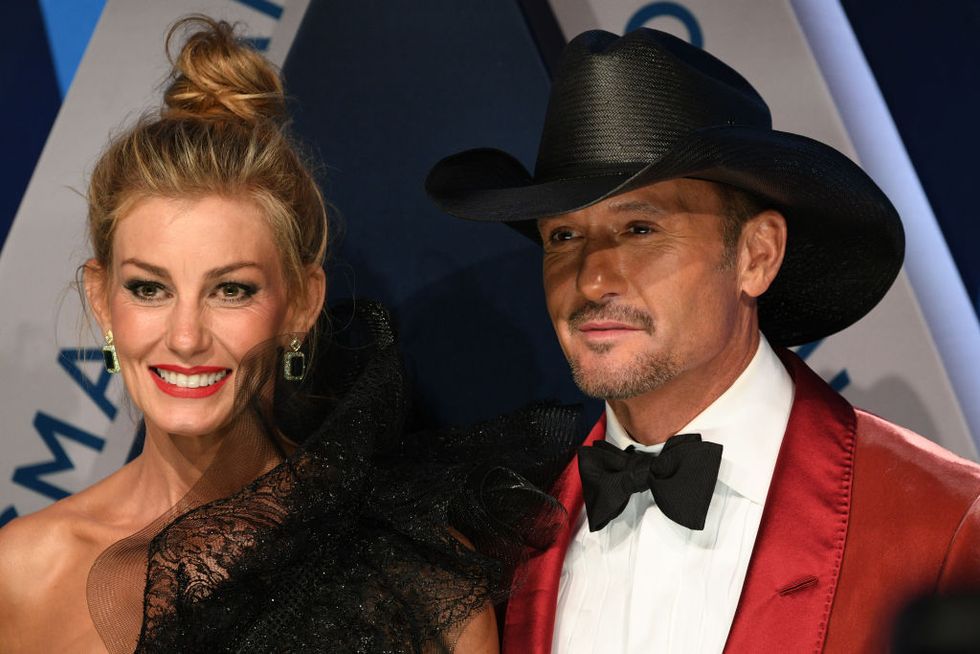 In a rare moment for the country music world, country music stars and couple Faith Hill and Tim McGraw spoke up about gun control in the wake of the Las Vegas mass shooting on October 1, which occurred at the Route 91 Harvest country music festival. Country stars tend to keep their more liberal opinions to themselves to avoid alienating their conservative fans, but this country music power couple are different from most.

In a new interview with Billboard, which took place before the Sutherland Springs, Texas church shooting, they reflected on the Las Vegas shooting and the many people they knew who were at the country music festival. More than that, they made it clear that they both support gun control.

Hill adds, “In reference to the tragedy in Las Vegas, we knew a lot of people there. The doctors that [treated] the wounded, they saw wounds like you’d see in war. That’s not right. Military weapons should not be in the hands of civilians. It’s everyone’s responsibility, including the government and the National Rifle Association, to tell the truth. We all want a safe country.”

It is difficult to get those in the country music industry to talk about gun control, because the average fan and consumer the industry depends on is conservative and big on second amendment rights. But then it became so bad that recent tragedies, as well as any subject involving guns, were forbidden from being mentioned.

The Country Music Awards this year placed a ban on reporters asking performers their thoughts about either the Las Vegas mass shooting, gun rights, or gun control. A week ahead of the 51s annual CMAs ceremony this past Wednesday night, the organization issued the new policy, claiming they wanted to focus on the celebrating the year in country music. Those who thought about violating the ban were threatened with revoked credentials and an immediate security escort out of the event.

Many in the country music community expressed their outrage over the ban on social media. CMAs co-host and singer Brad Paisley, who is friends with Hill and McGraw, criticized the music award organization for the ban.

Angry about the ban, Paisley tweeted: “I’m sure the CMA will do the right thing and rescind these ridiculous and unfair press guidelines. In 3…2….1…..,”

Shortly after, female vocalist of the year nominee Maren Morris denounced the ban as well: "Country music has always been about the truth. Out of respect for the Las Vegas victims, let’s keep it that way."

Country music has always been about the truth. Out of respect for the Las Vegas victims, let’s keep it that way.
— MAREN MORRIS (@MAREN MORRIS) 1509723224.0

Two hours after Paisley's tweet, the ban was lifted. The CMAs released this statement:

“CMA apologizes for the recently distributed restrictions in the CMA Awards media guidelines, which have since been lifted,” the company said in a press release. “The sentiment was not to infringe and was created with the best of intentions to honor and celebrate Country Music.”

Paisley applauded the change of heart: "Bravo CMA awards for doing the right thing & apologizing for this mistake. All are welcome, let's have a great show."

Bravo CMA awards for doing the right thing & apologizing for this mistake. All are welcome, let's have a great show.
— Brad Paisley (@Brad Paisley) 1509730879.0

Then at the CMAs Wednesday night, none of the performers shied away from the subject. Paisley kicked off the show acknowledging the tragedy: “The way we see it, the best way to honor our fans is to play our music — loud and proud. Our music lifts people up and that’s what we’re here to do tonight. So this year’s show is dedicated to all of those we’ve lost and to all of those who are still healing. We love you and we will never forget you.”

Co-hosts Brad Paisley and Carrie Underwood, joined by McGraw, Hill, and other country A-listers, honored the Las Vegas victims on stage with a performance of the Hootie and the Blowfish song, "Hold My Hand." Later in the evening, Underwood paid further tribute with “Softly and Tenderly” during the awards’ in memoriam.