ICE raids on undocumented communities occur daily, with the ultimate goal of deportation. Advocacy groups are working to prevent this from happening, but it is seemingly uphill. 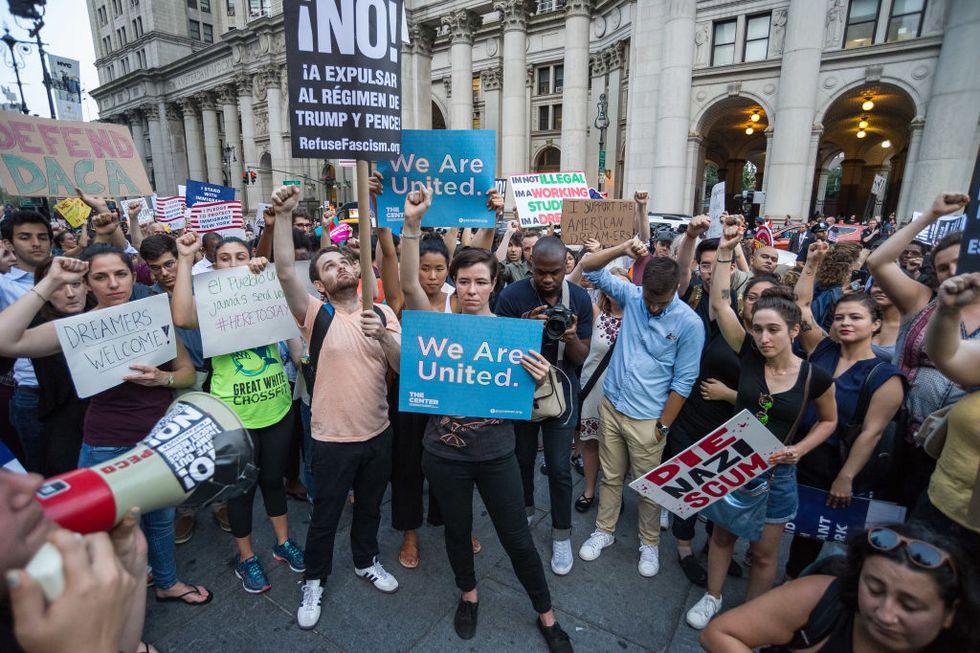 CITY HALL, NEW YORK, NY, UNITED STATES - 2017/09/05: Following President Donald J. Trump's decision to revoke the Obama-era DACA policy, thousands of activists rallied in Manhattan's Foley Square and marched across the Brooklyn Bridge. Before crossing the Brooklyn Bridge, a breakaway faction of the rally blocked Park Row near the Bridges's entrance and, after being ordered to vacate the street, were arrested by members of NYPD's Emergency Services Unit. Manhattan City Councilman Ydanis Rodriguez was among those detained by police. (Photo by Albin Lohr-Jones/Pacific Press/LightRocket via Getty Images)

Living in the United States without proper documentation is not easy, especially as raids on populations of immigrants living in small communities across the nation are rapidly increasing under the Trump administration’s watch.

The men and women of America’s Immigration and Customs Enforcement (ICE) make arrests daily. North Carolina is a recent and significant example, where ICE arrested at least 40 people in the second week of April alone, according to ICE spokesman Brian Cox.

There were about 15 arrests in western North Carolina during that time between Buncombe and Henderson counties. Cox is unsure of the precise number of individuals arrested.

Meanwhile, immigrant advocate group Compañeros Inmigrantes de las Montañas en Acción, known as CIMA, hosted an hour-long rally that week, during which family members of detained immigrants and recognizable city and county leaders spoke. The hastily-planned rally embraced the overarching message that these raids, and the actions of ICE as a whole, are unacceptable and intolerable.

“These are unjust moves from a rogue agency,” said CIMA coordinator Bruno Hinojosa, describing what he called ICE attacks on the Latino community of Buncombe and Henderson counties. “ICE has been given the power to do anything, and they’re terrorizing our community.”

Back in February, several reports emerged that ICE made arrests in Napa, California and the greater San Francisco Bay Area.

Facebook posts from user Omar Medina described the following: “ICE is all over Napa today, we’ve had several reports over the past three hours. They staged behind the Sheriff’s building. Also, possible spotting in American Canyon (unconfirmed). Several detentions in Central Valley yesterday and today as well. These images are from staging location this morning.”

Similar events occurred at a meat-packing plant and a school in Tennessee.

These are only a few instances of the many raids that have occurred across the U.S. in the past year. Most recently, an image has gone viral of children locked away and laying on a floor mat in a detainment center. Stories like this are becoming commonplace.

In an amplified example of ICE’s capabilities, immigrant rights leader Ravi Ragbir was detained at a procedural check-in meeting with ICE officials in Manhattan on January 11.

Ragbir, who was granted permanent residency in 1994, serves as the executive director of the New Sanctuary Coalition of New York City. Back in 2000, he was convicted of wire fraud, and his residency was revoked, accompanied by a 30-month prison sentence. He later requested the court revise their initial decision, citing flawed jury instructions and unsatisfactory legal representation.

His lawyers stated that the jury convicted Ragbir for “willful blindness,” which they consider an unfair determination.

According to Ragbir, he was a low-level employee at a now-nonexistent mortgage broker when he processed a real estate broker’s applications, which were afterward proven fraudulent.

“Ravi Ragbir means everything to this city. The fact that ICE has taken him, as if his spirit, family ties and contributions to the community mean nothing, is inhumane,” the New Sanctuary Coalition Co-Chairwoman Rev. Kaji Dousa said.

In a statement regarding the detainment, ICE spokeswoman Rachael Yong Yow said Ragbir had “exhausted” his petitions and appeals and would be deported. “(He) does not have a legal basis to remain in the U.S. He will remain in custody pending removal to Trinidad.”

However, those employed with ICE view arrests and detainments in a different way. Because searching for names on a target list falls under the job description, happening upon people living in the U.S. without documentation is not a violation of agency policy, according to Cox.

More complicating is that ICE sometimes quickly relocates its detainees. This is the case with some of the North Carolina arrests, where immigrants are commonly moved to one of four detention centers in Georgia, as ICE has no detention facilities in the Carolinas. In such cases, ICE's website does have a ‘detainee locator’ feature to assist in the location of missing people.

The frequency by which people go missing is why it is crucial that immigrants know their rights — like not consenting to searches or speaking to ICE agents — according to Shoshana Fried, an immigration attorney with Pisgah Legal Services and director of the Justice for All project, which helps undocumented individuals.

“It’s extremely difficult to know what your rights are, exercise them, and do that all in a language you may not fully understand. … Somebody can exercise their rights and still get detained, so I can’t stress enough how important it is to call an attorney as soon as a friend or family member is arrested. In these cases, time is of the essence,” she explained.

In perhaps an unanticipated turn, a determined advocate for the enforcement of detainments, arrests and deportation, Thomas D. Homan, recently announced that he is stepping down from his position as ICE’s acting director as of June. This could prove beneficial to the undocumented community, as he largely spent his year in that role advancing President Trump’s controversial agenda of deporting thousands of undocumented people from the U.S.

Homan, who worked in law enforcement for over 30 years — including time with the former Immigration and Naturalization Service, which preceded ICE — called his comparably brief, year-long time with ICE “the honor of his life” in a public statement.

Congressional Democrats, immigration advocacy groups and even some Republicans have accused Homan of supporting measures much harsher than necessary, like the targeting of people whose deportation was not sought under the Obama administration.

Considering his staunch attitude toward the enforcement of immigration policy, not limited to a vocal statement in late 2017 expressing that all undocumented migrants should fear deportation, and reinforcing those words at a border security conference in January, Homan has proven one of President Trump’s most forceful allies in forwarding the current administration’s controversial immigration plans, after having agreed to remain as acting director beyond his original resignation date of January 2017.

“I’ll never back down on those words. If you violate the laws of this country, if you enter illegally — which is a crime — it’s not going to be O.K. anymore,” Homan said.

One of Homan’s most egregious offenses to the undocumented community was his calling for the Justice Department to prosecute elected officials in “sanctuary cities” who attempt to protect undocumented immigrants. In such cases, if these policies persist beyond his resignation, elected officials like Mayor de Blasio of New York may face charges, as Homan has engendered a culture of pushing to see these officials locked up.

New York’s City Hall insists that Homan’s notion of sanctuary cities is not congruent with New York’s real life policies. Even so, the Department of Justice has threatened many times to defund these cities federally. Homan preferred to take these measures a step further, threatening to investigate and charge individual politicians for potential violations of a national “alien smuggling” statute.

“I think we charge some of these sanctuary cities with violating federal law,” he suggested.

Many advocacy groups have argued that Homan was incorrect in his claim that undocumented individuals are likely to commit subsequent crimes following an initial arrest. There is little evidence to his assertion, and other evidence argues immigrants are actually less likely to commit additional crimes.

Just following the ten-year anniversary of the Postville Raid, where ICE agents with military-style weapons stormed a kosher meat processing plant in Iowa and arrested almost 400 people, and in a climate where the U.S. president has the audacity to call undocumented people “animals,” it is worth addressing the issue of how to properly handle immigration. At present, it is difficult to see a way out of this highly-politicized climate. Though advocacy groups are working tirelessly to make the U.S. safe for those who live here, others believe mass detainments, arrests and deportation are the way to installing a sense of justice and safety for Americans. For those who subscribe to the latter school of thought, it is worth noting that undocumented people are still people, and the effects of immigration policies on children and communities are of great importance. The paramount goal of the government should be the safety of everyone in the country.