A Symbol of Pride or of Prejudice? Hope Rises as South Carolina Lowers its Confederate Flag 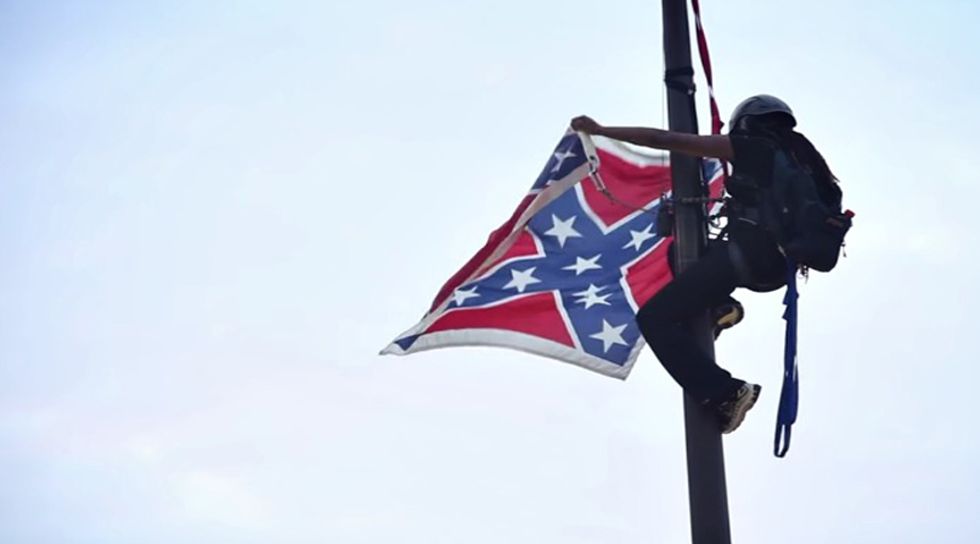 At 10:00 AM on Friday, July 10, 2015, the Confederate flag flying before South Carolina’s State House was lowered for the last time. Republican Governor Nikki Haley signed a bill into law on Thursday ordering the controversial flag’s removal. The New York Times reported that the flag will go to the Confederate Relic Room and Military Museum, and that the flagpole will also be removed.

The decision to remove the flag followed a week-long tumultuous and often deeply emotional national debate about what the Confederate flag actually represents and whether it is appropriate to display at all. While many Americans, including 72% of black Americans, view the Confederate flag as a symbol of racial oppression and hatred, others argue that the flag is imbued with alternative meaning: some claim it honors the soldiers, black and white, who fought and died under it in the Civil War; that it is a symbol of Southern heritage and pride; that it represents the “rebel”’ spirit. But after the senseless and racially motivated murders of nine innocent parishioners and the subsequent burnings of at least eight predominantly black churches (only three of which have been ruled to be arson thus far) those arguments have been soundly rejected. National retailers, for instance, including Wal*Mart and Amazon, pulled merchandise bearing the Confederate symbol from their shelves in the days following the horrific shootings.

South Carolina has displayed the Confederate flag on the State House grounds for decades. According to the New York Times, “[t]he flag was originally raised above the capitol dome in the early 1960s at the height of the anti-integration sentiment in the white south. It was moved in 2000 to a spot next to the Confederate Soldier Monument after an impassioned period of protest, and continued to be one of the most divisive issues in the state.”

Though South Carolina’s choice to prominently display the Confederate flag has long been a source of bitter debate, a new national debate erupted when photos surfaced of Dylan Roof, the young man accused of murdering nine African Americans during a Bible study session on June 17 at Emanuel African Methodist Episcopal Church in Charleston. The chilling photos, accompanied by a racist tirade, depict Roof posing with a Confederate flag; others show him aiming a gun at the camera. Soon after the widespread publication of the photos, demands for the flag’s removal from its prominent place on South Carolina’s state house lawn grew too numerous and loud for lawmakers to ignore further.

President Obama recently weighed in on the controversy, reportedly saying that he believes South Carolina’s flag belongs in a museum rather than flying high over the State House lawn. And activist Bree Newsome made headlines when she scaled the flagpole and removed the flag herself—it had been secured with a padlock and could not be lowered

from the ground. The Washington Post quoted Newsome: “We removed the flag today because we cannot wait any longer... We cannot continue like this another day. It’s time for a new chapter where we are sincere about dismantling white supremacy and building toward true racial justice and equality.”

Though Newsome was ultimately arrested and the flag retrieved by state officials as soon as she descended, her actions were lauded by many, including Reverend Jesse Jackson and filmmaker Michael Moore.

Even as South Carolina’s legislature made the historic decision to remove the Confederate flag, a few hundred miles north in Washington, D.C., Republican Representative Ken Calvert of California was attempting to preserve the right to display and sell the controversial symbol in some federally controlled spaces.

The House approved two measures on Tuesday banning the use and sale of Confederate flags in federal cemeteries and parks. Rep. Calvert’s amendment, had it passed, would have curtailed those efforts. Deirdre Walsh of CNN writes:

“The controversial amendment would reinforce two Obama administration directives, one from 2010 that limits Confederate flags at grave sites to certain state-designated Confederate Memorial Days only, and one issued June 29, that allows park superintendents to determine what items may appropriately be sold at concession stands.

But Rep. Nita Lowey, the top Democrat on the House Appropriations Committee, blasted the GOP move on Wednesday night and urged members to oppose it.

‘Tonight, after nearly 20 hours of debate on the Interior and Environment Appropriations Act and approval of three amendments banning sale and display of the Confederate flag in national parks and cemeteries administered by the National Parks Service, the Republican majority introduced an amendment reversing course,’ she said in a statement. ‘The Calvert amendment would shamefully challenge the emerging national consensus that government must not countenance such a symbol of hatred and intolerance.’”

GOP leaders cancelled the vote on the Calvert amendment, which had been scheduled to take place on Thursday—a decision that came on the heels of significant Democratic tongue-lashing as well as considerable public outcry. But announcement of the vote’s cancellation did not come until after South Carolina’s House voted 94-20 to remove the flag from its own State House grounds.

Though the meaning of symbols like the Confederate flag can arguably be obscured by time and through the stories we tell ourselves, to many the removal of South Carolina’s flag on Friday was decades overdue. The fact that a majority of a Americans currently believe it represents ”Southern pride” failed to cleanse the symbol of its darker history; despite whatever narrative our collective ideology prefers, to many, particularly African Americans, the flag also represents a terrible wrong and an old wound our country has been unwilling or unable to heal. There is renewed hope now that the final lowering of South Carolina’s flag will mark the beginning of a new chapter, where we are indeed just “one nation, indivisible.”

If you are curious at why South Carolina resisted and refused for so long to remove a symbol of hatred and oppression, you may also want to read what its neighbor to the north is attempting in North Carolina’s End Run Around Marriage Equality.