The taunt "bird brain" is unwarranted because even the dumbest of birds, the emu outsmarted Australian soldiers in The Great Emu War of 1932. 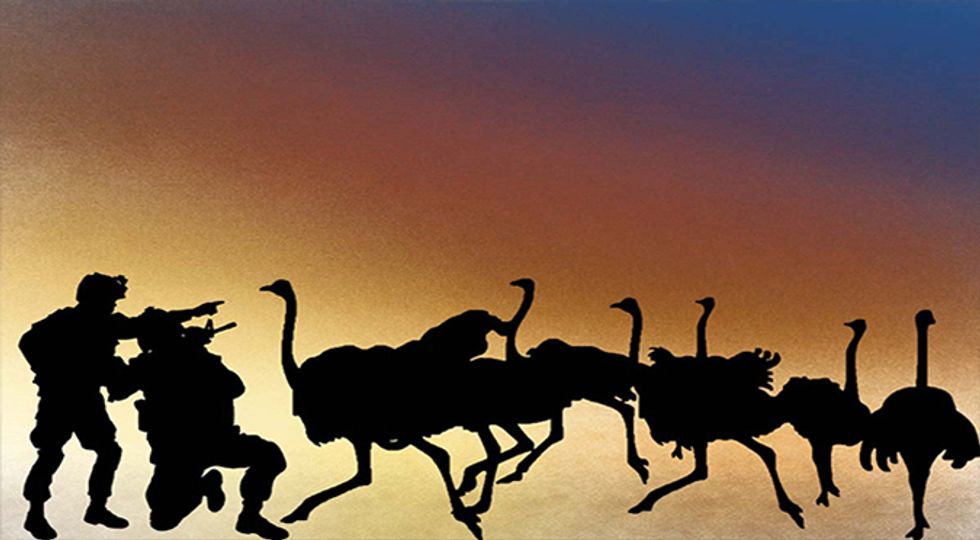 In the winter of 1932, Olympic athletes competed in Lake Placid, New York. In England, Agatha Christie published her 12th mystery, Peril at End House. In Asia, the “January 28 Incident” sparked a short war over the city of Shanghai between Japan and China. And farther to the south, in Australia, the Great Emu War broke out.

Yes, weird as it sounds, there was a war on the very creatures that inspired Sesame Street’s Big Bird. And the humans lost. There were casualties on both sides, but despite being heavily armed with rifles, humanity lost this fight.

After the First World War, many Australian soldiers shifted back into their jobs as farmers.  Following the Great Depression in 1929, the price of wheat tumbled. Then the wheat economy was disrupted in an unusual way. By 1932, about 20,000 emus stormed into the region as part of their breeding season activities. Finding the waterlogged agricultural lands of Western Australia particularly appealing, they rapidly set up shop, stealing as many of the crops as they could and causing pandemonium.

An adult emu will eat about a pound and a half of feed per day. This means 20,000 emus can eat a wheat field the size of New York City in just under three weeks.

The Australian Minister of Defense gave the former soldiers access to Lewis machine guns and plenty of ammunition, along with some top brass military guidance from Major G.P.W. Meredith of the Seventh Heavy Battery of the Royal Australian Artillery. The war to run off the emus began in earnest in November of 1932 after a wet fall. All indications pointed to an easy human victory. But the emu outran and outsmarted the soldiers.

Contrary to popular belief, many birds are not actually "bird brained.” Recent research from Eastern Kentucky University suggests that birds can be quite intelligent. There have been many sightings of fly-fishing herons catching insects and laying them on the water's surface to attract fish. Gulls frequently drop shells onto rocks to break them and small tits in

England learn to open milk bottles left on people's doorsteps. Among other examples of bird intelligence was a story of war zone vultures which waited by a minefield for stray animals to be blown up.

On the bird IQ index, corvids and falcons top the list, followed by hawks, woodpeckers, and herons. The world's first bird IQ index was compiled by Louis Lefebvre based on 2000 published observations of unusual feeding behavior.

With a brain the size of a walnut, the emu may not find itself at the top of the list, but as the Australian soldiers found out, they are incredibly fast. When avoiding predators — or in this case the guns of Australian soldiers — emus can sprint up to 31 miles or 50 km per hour,

During the Great Emu War, the emu took cover in dense scrub brush and behind trees, where the soldiers couldn’t get a clean shot. A newspaper report on the war pointed out that the “emus soon began to improve their own understanding of the science of warfare.” The emus appeared to realize that if they stood just far enough away, the soldier’s guns were too inaccurate to hit them.

One soldier remarked that the only way to kill an emu was to “shoot it through the back of the head when his mouth was closed” or “through the front of his mouth” when it was open. “That’s how hard it is,” he bitterly added.

Only around 1,000 emus were killed with nearly 10 times that number of bullets spent. The emus eventually left the region when they ran out of crops to eat. An expensive wall along the western territories was built to keep the emu out and bounty hunters to cull their numbers, killing 57,000 emus by 1934.

Today the emu is an officially protected species. And when they are not being shot at, chased or starved, emu can live to be 10 to 20 years old.