More than 4,600 Puerto Ricans died in the aftermath of Hurricane Maria, but has FEMA learned any lessons? 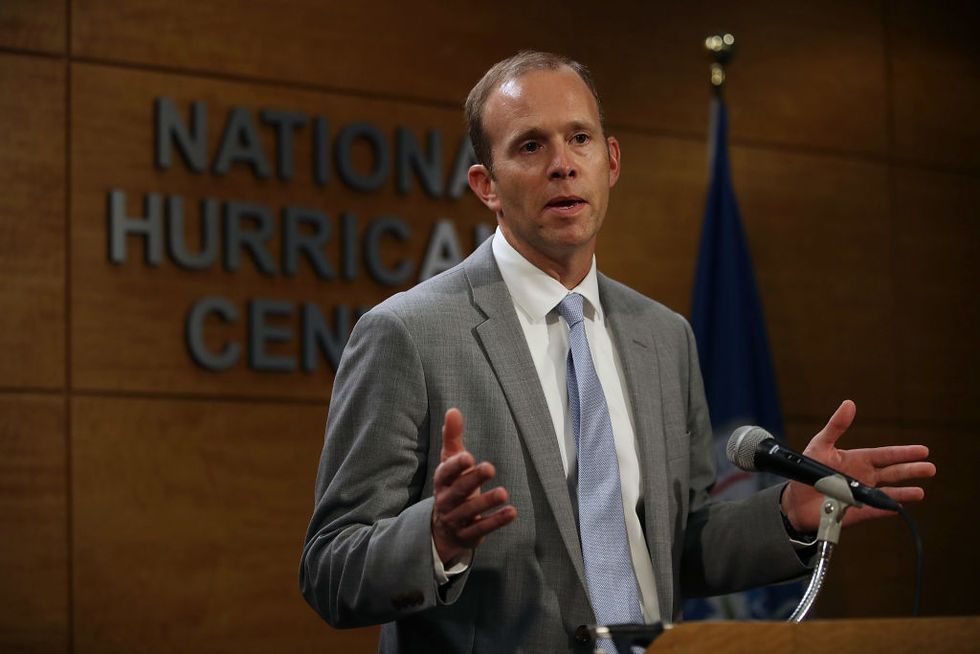 MIAMI, FL - MAY 30: Brock Long, FEMA's director, speaks to the media during a visit to the National Hurricane Center on May 30, 2018 in Miami, Florida. Mr. Long urged people to prepare for the upcoming hurricane season that officially begins on June 1, 2018 and ends on November 30th. (Photo by Joe Raedle/Getty Images)

As the 2018 Atlantic hurricane season approaches, FEMA has released its long-awaited report into its failures during the 2017 season. To its credit, FEMA acknowledges how it failed (and continues to fail) Puerto Rico. But FEMA administrator Brock Long alsoshifted some of the blame to the catastrophe’s victims.

“The 2017 hurricane season showed that all levels of government — and individual families — need to be much better prepared with their own supplies,” he said. “Particularly in remote or insular areas where commodities take longer to deliver.”

But even if Puerto Rico had been somehow better equipped to endure one of the worst hurricanes on record, FEMA was shockingly unprepared for Hurricane Maria’s after effects.

As a reminder, 4,645 Americans died in Hurricane Maria and its aftermath. For reference, an estimated 1,836 died as the result of Hurricane Katrina.

In fairness to FEMA’s staff, 2017 was a year heavy with disaster. More than five million people applied for FEMA relief in 2017; that number outstrips the applications following Hurricanes Rita, Wilma, Sandy, and Katrina combined. They served more than 130 million meals, 35 million in Puerto Rico alone. And they did it whiledesperately understaffed.

Obama-era FEMA chief Craig Fugate says that even if a resupply shipment had arrived, it would have been minimal.

“‘There are empty shelves here,’” Mr. Fugate remembers thinking during a visit to FEMA’s San Juan depot. “We leased the building and were only using some of it. ‘Why are we not stocking more stuff?’ They said: ‘This is based on what we have historically used here.’”

Recovery from the stormis still ongoing in Puerto Rico as the 2018 hurricane season approaches. As of July 16, electricity had been restored to just 95% of the island. In June, nine months after the storm, the local government released the official fatality count of 4,645,under duress. Previously, the official death toll was 64 people.

Critics may perceive this story as the collision of two overarching credos of Donald Trump’s administration, with catastrophic results. We’ve reported before on how Trump’s emphasis on smaller government has resulted inunprecedented staff turnover and thousands of unfilled positions. And the Executive Branch’sdenial of climate change — going so far as toremove it from the EPA’s website — means thatit cannot acknowledge the realities of more frequent and more violent weather events.

Combine those two elements with theanti-immigrant fervor of Trump’s base, and a clearer understanding of the Hurricane Maria response begins to emerge.

On the ground, it’s impossible to immediately dispatch aid following a Category 4 hurricane. But there are steps FEMA could have taken, according to the report. Maria made landfall on the island on September 20, 2017, just two weeks after Hurricane Irma caused power outages for six million people in Florida, and three weeks after Hurricane Harvey engulfed Greater Houston, leaving 780,000 people in need of emergency shelter.

Irma didn’t strike Puerto Rico, but it did devastate the US Virgin Islands, just over 100 miles away. Following that storm, FEMA officials directed all of its supplies in San Juan to the relief efforts on the other island. And due to its relief efforts on the mainland, or because it was understaffed (and the staff available wasn’t properly trained), the resupply order didn’t arrive before Maria.