An Ex-Tesla Engineer Just Figured Out a Cure For Hangovers 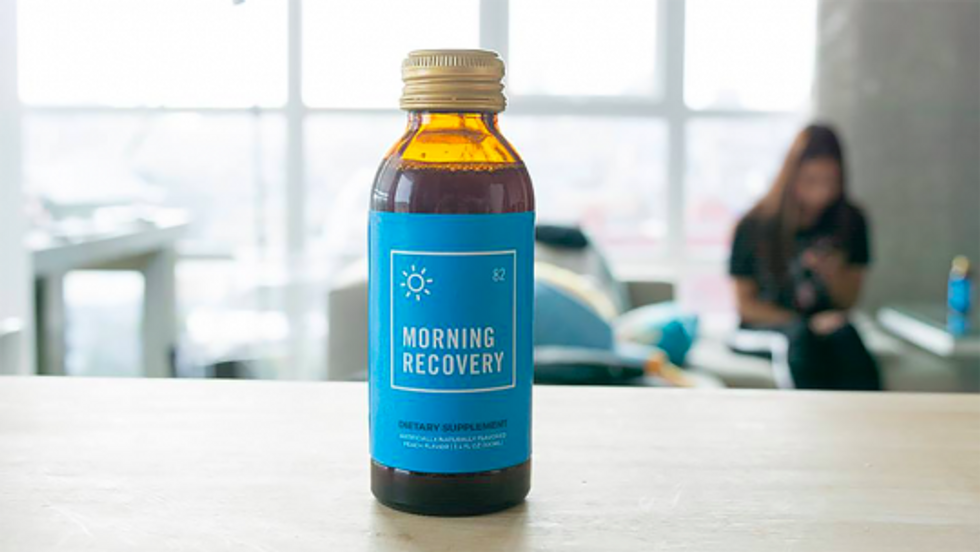 Sisun Lee, a former Tesla engineer, believes he's found the cure to your hangovers, and he's launched a new company to prove it. On July 5, his startup Morning Recovery will begin selling an FDA-compliant hangover cure. He hopes to one day get FDA approval.

The key ingredient, according to the work of Dr. Jing Liang, a UCLA researcher who has published papers on herbal remedies for hangovers, is dihydromyricetin (DHM), an herbal compound found in the Oriental raisin tree and rattan tea that has been a component in herbal hangover cure drinks in Asia for thousands of years. The compound boasts anti-hepatotoxic properties which help detoxify the body after alcohol poisoning.

Lee also learned that purity, quantity, and "a lot of other ingredients" contribute to a successful hangover cure. "You lose Vitamin B and Vitamin C in the body. These are all things that are not in Korean hangover drinks," he said. (You can find a more technical explanation on the Morning Recovery website HERE.)

A year ago, Lee visited his home country of South Korea, where he spent a lot of time drinking with his friends. Instead of suffering from hangovers, his friends introduced him to the hangover cure drinks which are popular there. The drinks worked. "The next day, I woke up feeling great," he recalled.

Upon returning to the United States, Lee searched for similar drinks, but none of the "cures" he came across worked nearly as well. After ordering some Korean ones online and sharing them with his friends, he found that everyone loved them and wanted more. He then attempted to import drinks from South Korea and become a distributor but found that companies were not interested in having someone with no background in beverages or consumer goods represent them in the United States. Lee thought it best to create his own formula and, with the help of Dr. Liang, who agreed to advise him, and a few of his tech engineer friends, he did.

Once Lee had the formula, he set his sights on finding a contract manufacturer who could produce it in bulk. He took a two-week trip to Asia and tested their sample runs on himself. He reports he "was basically getting drunk every single night" but that he was still skeptical if he had consumed enough alcohol for the hangover cure to take effect. He recorded himself drinking while going out to verify he was truly getting drunk and even tried skipping his hangover drink in the mornings to verify he would still wake up hung over.

Later, he recruited his friends to distribute the drink to more people. Feedback was positive, with 80 percent reporting that the drink helped them the morning after. But the team needed a much larger sample size.

Popularity for his hangover drink exploded after Lee and his team put up a web page explaining the science behind their creation and asked their friends to share it on Facebook. A venture capitalist in Toronto saw the post and put it on Product Hunt, which helps launch new products.

"Overnight we became No. 2 on Product Hunt. We weren’t even a startup. We were just people doing this thing," he said. "That day 10,000 people signed up to try it. News stories about the drink began popping up. We had to apologize, and changed the web page from offering to send a sample to a waitlist."

Once the waitlist ballooned to more than 30,000 people, Lee made the decision to leave Tesla and run his own company. "Leaving Tesla was a very tough decision. If I could have done both, I would have," he said, adding that he would have regretted not taking the risk.