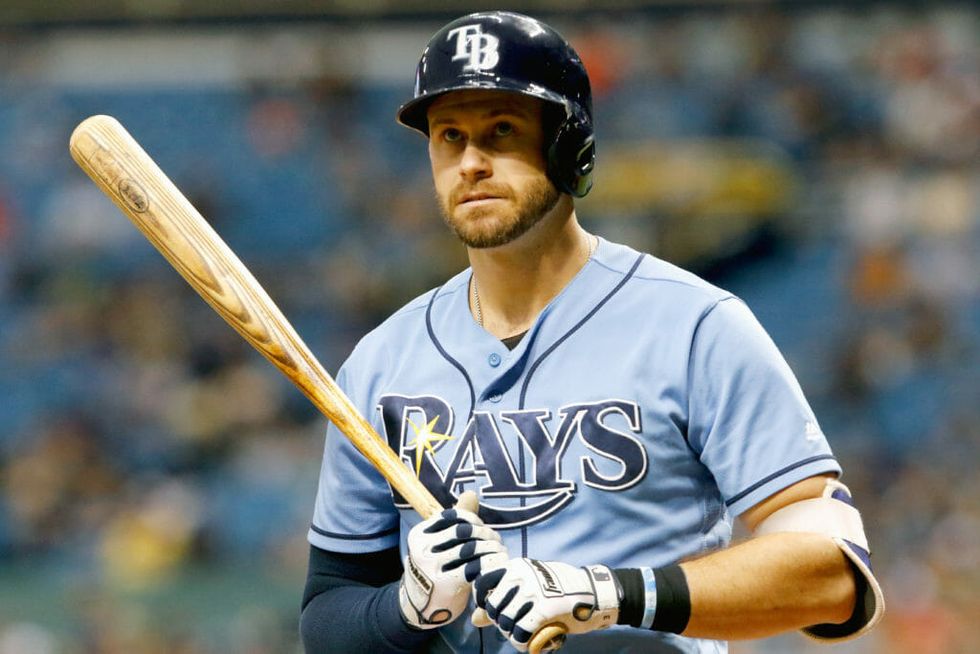 ST. PETERSBURG, FL - OCTOBER 1: Evan Longoria stands in the batters box during his turn at bat in the game against the Baltimore Orioles (Joseph Garnett Jr./Getty Images)

Evan Longoria is headed to San Francisco. Yesterday (December 20th, 2017), the Rays traded their franchise cornerstone to the Giants. Longoria will now be playing third base in California's bay area. Six hours away, actress Eva Longoria lives in Hollywood. Obviously the two have similar names, but is Evan Longoria related to Eva Longoria?

The quick answer is no. Although both share a surname and both are of Hispanic descent, the Giants' third baseman and the Hollywood actress are not from the same family. They've had at least some form of contact, however, and have even made light of the fact that they share a last name. According to this web site, Eva Longoria sent a bottle of champagne to Evan in July 2008. It was a gift to celebrate his first All-Star selection; she also sent three jerseys to sign and send back to him.

Eva also sent congratulations to Evan after the Rays won the American League Championship Series. The following was her official statement (shout out to Yahoo Sports).

"I hope Evan gets Rookie of the Year and congratulations to them making it to the World Series!!! I thought it was funny when someone first told me that there was an Evan Longoria playing for the Tampa Bay Rays, but I kept hearing his name being mentioned after another Rays win. It's good to see that he is representing the Longorias well and keeping the name proud!"

Evan doesn't necessarily like being asked if he's related to Eva. During an interview with David Brown of Yahoo Sports, he declined to talk in detail about her. "I'm done talking about that," the third baseman stated. "I did it all through the minor leagues. That's all I had to hear was her name associated with mine. I think we're kind of past that. That's all."

He's past it indeed; Evan has won a Rookie of the Year award, along with three Gold Gloves and a Silver Slugger. He's played in three All-Star games and garnered MVP votes in five different MLB seasons, so it's fair to say he's stepped out of his non-sister's shadow.